New York-born painter Steven Assael says he has no difficulty with other people using photography as the basis of their painting. But he was also quoted by The Huffington Post in 2015, saying: “It just has to be understood that there are dramatic differences between how the camera looks at and experiences the world and how we see it.”

“A camera records a scene in a split second, whereas we see movement over time. We synthesize observations, and the resulting painting is the culmination of many moments. We selectively choose details and, in that selection process, meaning and surprises happen, giving the art a life of its own.”

Looking at the images below, you can see exactly what Assael means. Brilliant images on one hand; on the other, a depiction of a cityscape with many layers of interpretation.

The Ponte Vecchio is an iconic piece of architecture in Florence (if you’re staying in one of our villas near Florence, it’s a must see). This medieval bridge spanning the River Arno has always hosted merchants, although the 15th-century butcher shops have long gone, replaced by jewellers, art dealers and souvenir sellers.

This Cubist version by Micheal Jones is typical of much of his work, a style in which “everything old is new again.” He adds: “I use the fewest colours I can, usually only the primaries, white and the original Burnt Umber that I stained the canvas with. I rarely work on one spot at a time, moving over the canvas, distributing light and colour as I see the need.”

In this painting, he focus solely on the bridge, negating the need to illustrate the water beneath. It was a conscious decision, he says.

“It reflects my desire to simplify a complicated subject matter into a pattern of ambient colors and textures, while exploring the movement and rhythm of the motif, and retaining the recognizable characteristics of the location, much in the manner of Monet and Cezanne. With such a simplification of forms, even the water of the Arno itself becomes a solid pattern of reflected color.” 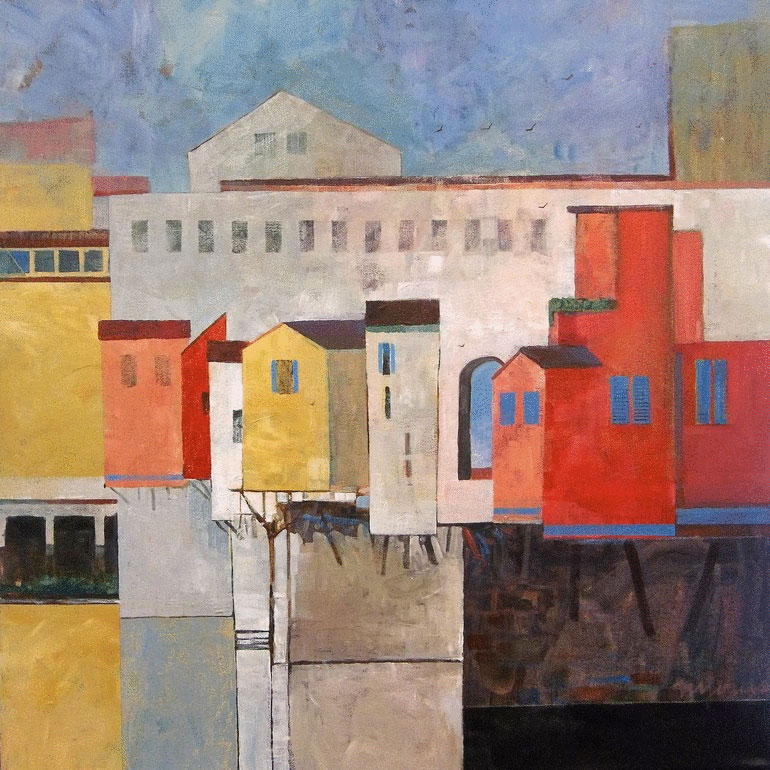 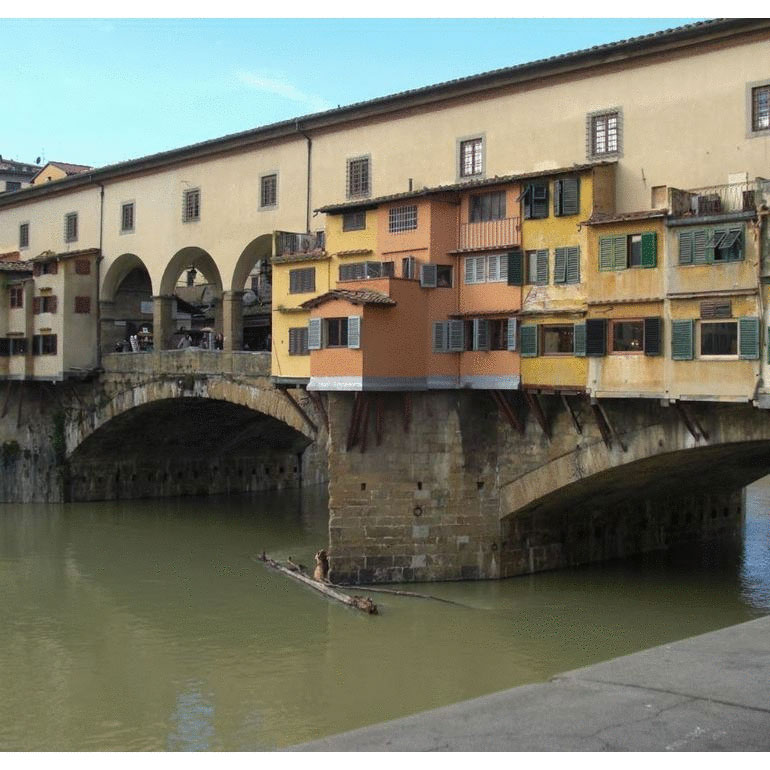 The Cinque Terre, south-east of Portofino on the Italian Riviera, comprises five villages. Part of the Cinque Terre National Park, and a UNESCO World Heritage site, these settlements are built right into steep cliffs. Their famously vibrant colours were supposedly chosen so fishermen could spot their house from the sea.

A portrayal by Stoyan Lechtevski showcases this vibrancy. As opposed to the medieval ochres captured in the photo, pastel shades help suggest a cooling sea breeze. A photo can capture changing colours through the day; this shot captures sunset, and injects another ochre element into the town, making it perhaps duller than it appears to the naked eye. Lechtevski’s Impressionist technique illustrates a central, vibrant town where sea and sky merge.

The painting is about an animated village by the sea, it seems, not about the surrounding landscape itself. This is also echoed by the photograph: the town turns inward, ignoring the Mediterranean. It is not dusk here, but day, even if the colour palette suggests it is not scorching hot. 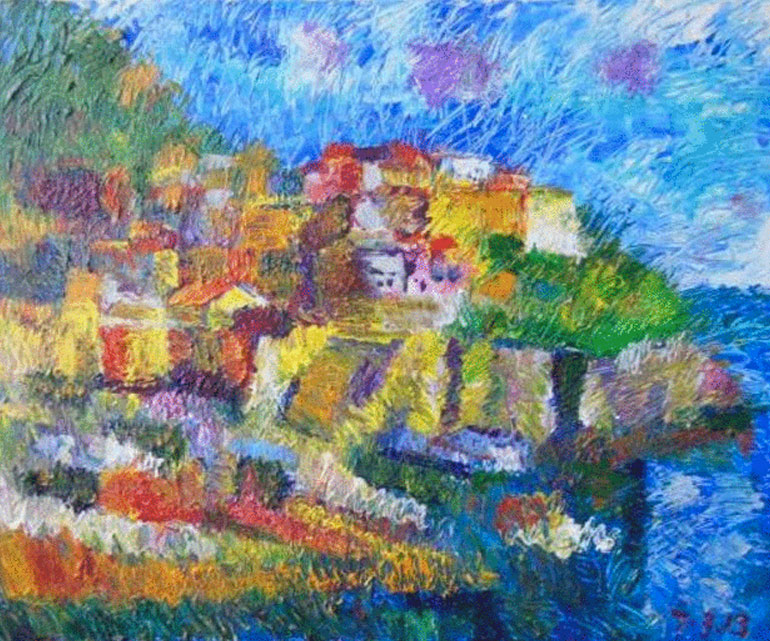 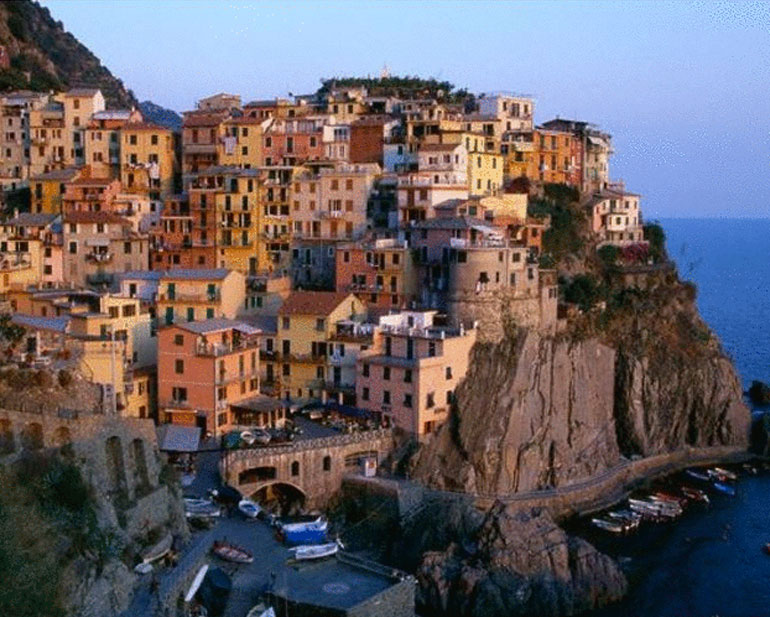 This decaying Italian hill town perches over the Tiber river valley, 75 miles north of Rome. It dates back 2,500 years, but erosion of its volcanic plug is hastening its decline. Homes have fallen into the valley over the centuries and the permanent population has dwindled to a dozen or so in winter (the numbers rise with Italian second-homers and visitors). The only access point is via a footbridge.

A linocut by Malgorzata Stanielewicz suggests a cold isolation which must plague the town in winter. “When traveling, I look for places that will captivate me, that will stimulate my imagination. After all, the most important thing is the sensual experience, the observation of a specific place, astonishment, awe,” says Stanielewicz. 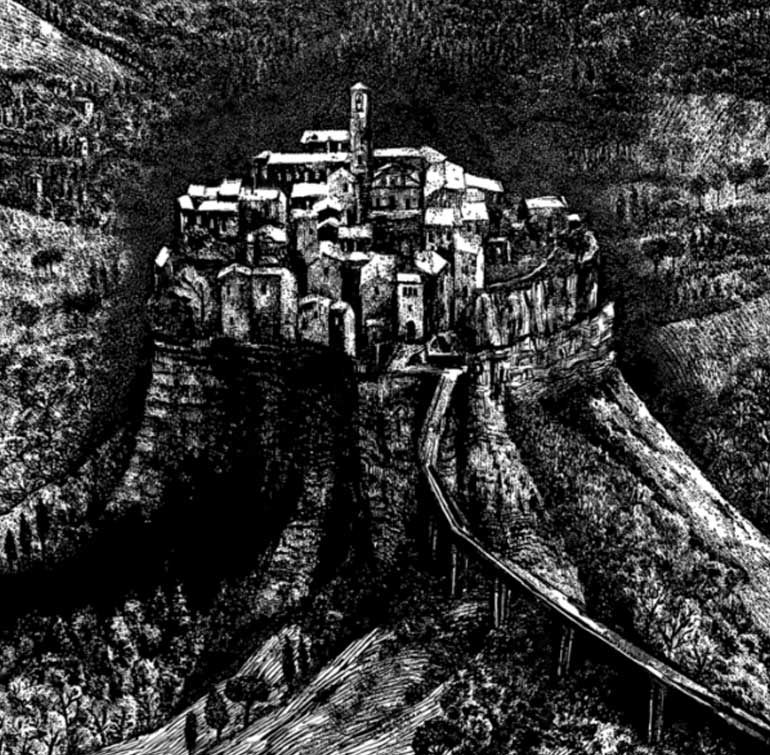 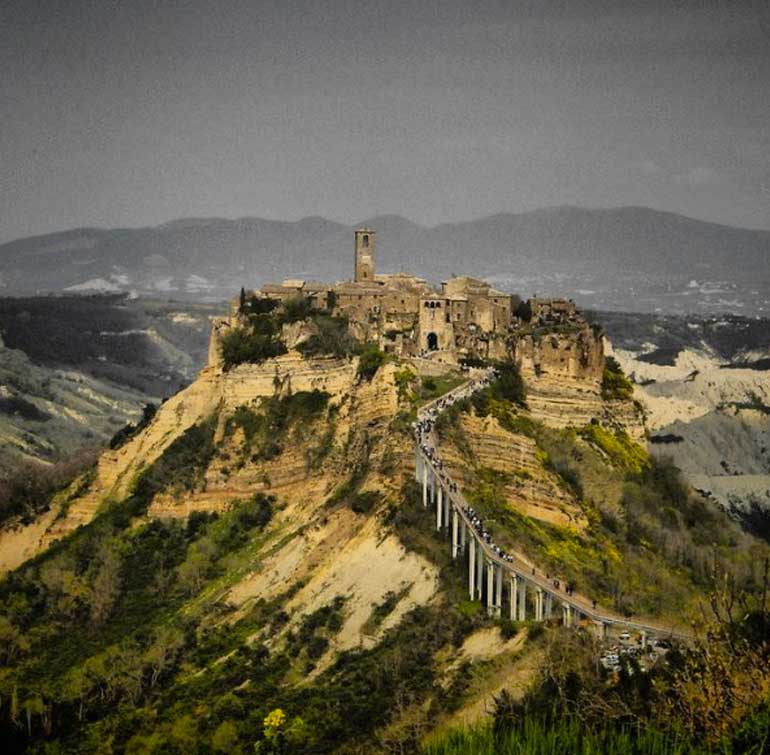 Lake Como is the third-largest in Italy, after Garda and Maggiore. In 1818, the poet Percy Shelley wrote: “This lake exceeds anything I ever beheld in beauty, with the exception of the Arbutus islands of Killarney. It is long and narrow, and has the appearance of a mighty river winding among the mountains and the forests.”
The villas and towns that hug the shore are painted by artist Dai Wynn, who says:

“The mountains on either side of the lake leave little room for roads and houses on its shores, so travellers to the tip of the peninsula at Bellagio have the choice of a terrifying horn-blaring bus trip on a narrow, winding, single-lane road cut into the cliff face, or a relaxing ferry ride on the relatively calm waters of the lake.”

Wynn has taken the heat out of the hot blue sky in the photo, and has used a watercolour wash to give a romantic feel. He brings the town into sharper focus, making the lake seem more populated than it appears in the photo. This makes the landscape personal, intimate and familiar. 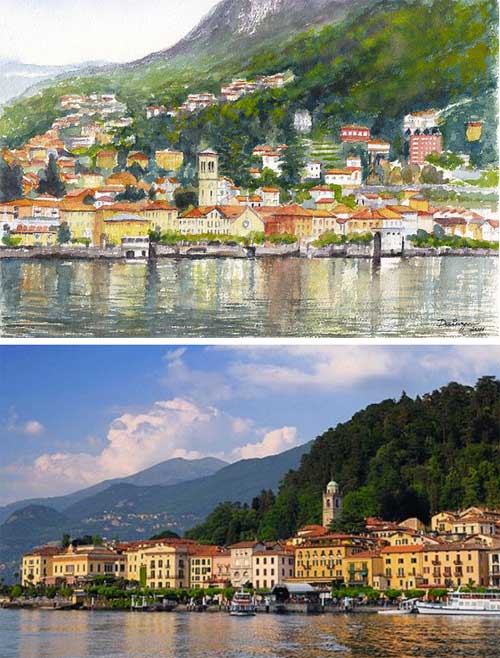