This brief but hugely influential film genre emerged towards the end of World War II and lasted until 1951. The main feature of the films is a focus on the lives of ordinary people in the aftermath of war. Neorealism relied on actual location shooting, and often the use of non-professionals. 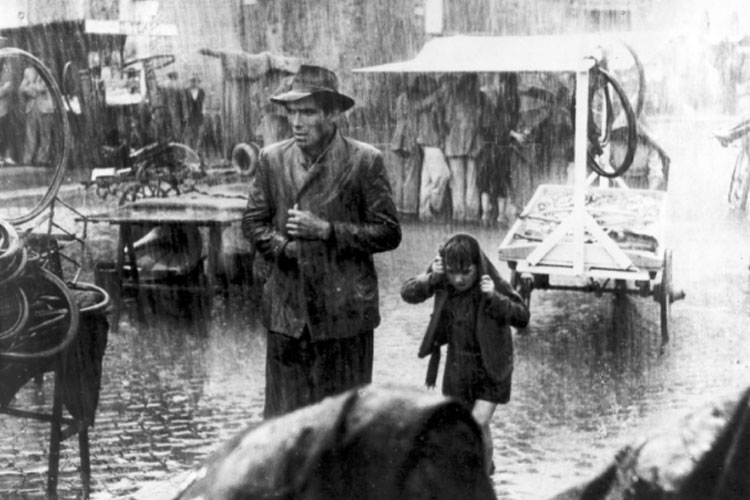 The films took an uncompromising look at the struggles of poor, working class people at a time of economic collapse, and the desperation and moral ambiguity that resulted. Directors including Rossellini and Visconti made between 80 and 90  films, which also railed against the glitter and showbiz of Hollywood.

The genre thrived until new-found prosperity in Italy in the early 1950s changed attitudes, and the films were seen as too negative. But the impact of the Neorealism movement has not lessened with time.

One of the most important films of the period was Bicycle Thieves (1948, pic above). It was about a man who had his bike stolen: his job and family’s livelihood depend on it, so he and his son go in search of the thief. But it is also about the broader population, all going through the same sorts of experiences.

“For me, it is as unbearable as any horror film,” said Guardian critic Peter Bradshaw in a 2008 review of the film, when it was released on DVD. It was also voted the 10th greatest ever film in a poll of directors carried out by the British Film Institute in 2012.

Tuscany Now & More staged a viewing of this classic film in Leeds, with an audience of invited guests. Leading the event was Bryn Young-Roberts, film lecturer, author, editor of Deep Focus Film Studies and a massive fan of the genre. He delivered an excellent talk introducing Neorealism, explaining its place in history and key characteristics, and looking into some of its most prominent films.

Bryn said: “It was great to see so many people eager to learn about a fascinating piece of European cinema history. Bicycle Thieves is an all-time great, and I encourage everyone to hunt out and watch more of these classics.”

Listen to Bryn’s 20-minute introduction to the evening here: