Around 10 miles off the mainland, the island of Elba has some of Tuscany’s best beaches. Its rocky interior is covered in typical Mediterranean macchia scrubland; almost any drive heading away from the main ports is a pretty one.

If you plan to visit in high season — even on a day-trip — book ferry crossings as far ahead as you can. The island is very popular in July and August. Out of season, you can just roll up at the well-signposted port in Piombino and catch the next 1-hour crossing.

At Portoferraio, the island’s capital and major port, the Forte Stella is raised above the old town on a rock pedestal. Much of its construction dates to the Grand Duchy of Tuscany, when Duke Cosimo I (a Florentine Medici ruler) fortified the port to protect Elba’s iron ore exports.

Elba also has a couple of heritage sites relating to Napoleon’s exile on the island. After defeat in the War of the Sixth Coalition, he was banished to Elba by the 1814 Treaty of Fontainebleau. He stayed on the island for less than a year, before escaping for one final defeat at the Battle of Waterloo in 1815.

The Palazzini Dei Mulini was Napoleon’s stately townhouse, high on a hill above Portoferraio, with a great view of the busy port’s comings-and-goings.

Inland from Portoferraio is the secluded home where Napoleon was due to spend the summer months of his (somewhat luxurious) Elban exile, the Villa San Martino. He never stayed there. Revamped in the neoclassical style by Prince Demidoff, this country manor is decorated with insignia and mementoes relating to Napoleon’s time on Elba, as well as his passion for Egypt.

Elba has the best panorama of the Tuscan coastline, from the 1,019m summit of Monte Capanne

Elba is ringed by beaches — sand, shingle and a mix of both. The remote south-west of the island has perfect crescents of white sand at Fetovaia and Cavoli. North of there, the coarse sand beach at Sant’Andrea lies in a photogenic little cove and has basic beachside facilities. 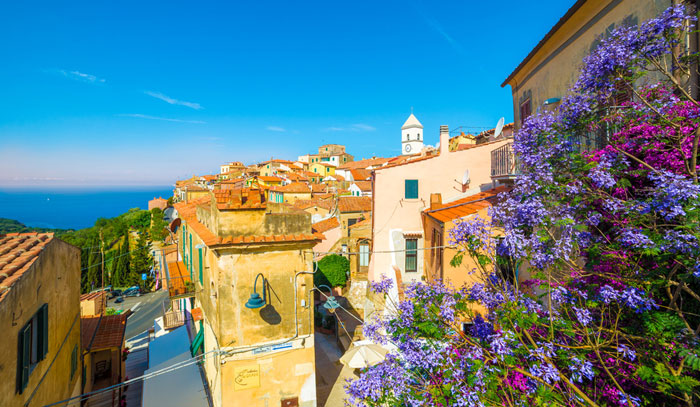 Long sandy beaches at Marina di Campo and Procchio have plentiful parking and family-friendly facilities. In the south-east, Zuccale and Innamorata beaches both face the sunset.

Elba also has the best panorama of the Tuscan coastline, from the 1,019m summit of Monte Capanne, in the island interior. If you are feeling energetic, it’s possible to hike the trail to the top. For everyone else, there is the Cabinovia, an open-air cable lift that whizzes you up from Marciana in less than twenty minutes.

Seafood is a staple all over the island: the best menus ebb and flow to the rhythms of the daily catch. You will find ingredients like seppie (cuttlefish, whose ink is the key ingredient in riso nero, black risotto); totani (baby squid) and bottarga (rich, salty tuna roe); and riccio (sea anemone, great with linguine).

The best wines from the Elba DOC growing zone are white — and perfect for washing down a plate of fresh seafood cooked simply.