A building spree in the 12th-century left Pisa with a unique legacy. On the edge of its compact, flat city centre is a grassy field that is also Italy’s most extraordinary piazza — deserving of its nickname: the Campo dei Miracoli, “Field of Miracles”.

Here you will find the famous Leaning Tower, and much more. There is also the vast Romanesque cathedral and a Baptistery with one of Tuscany’s finest works of Gothic sculpture. Pisa is a treat for architecture fans.

Away from the Campo, Pisa is a genuine, locals’ city, with a large number of students who attend one of Italy’s oldest universities.

Close by are several sandy beaches, and Pisa is only a short drive from one of Italy’s truffle capitals, San Miniato.

Nowhere in Tuscany had such a profound influence on Italian Romanesque architecture than Pisa. Its seafaring traders had long links with the eastern Mediterranean, North Africa and the Arab world. Design influences they imported shaped architecture way beyond just their own city.

Work on the most celebrated botched job in the history of building — the campanile (bell tower) of Pisa’s cathedral — began in 1173. The subsoil below the Leaning Tower of Pisa was unsuitable for such a heavy building, however, and it quickly developed a lean. After several unsuccessful attempts to straighten it — including changing its shape to the current “banana” form — it was finished during the 13th century. It is now kept upright by a system of counter-weights and strong steel cables.

Pisa’s other great Romanesque monument the Duomo, which dates to 1064. The influence of Arab design and motifs is obvious, especially on a façade of multicoloured marble, arches, blind arcades, lozenges, and columns. 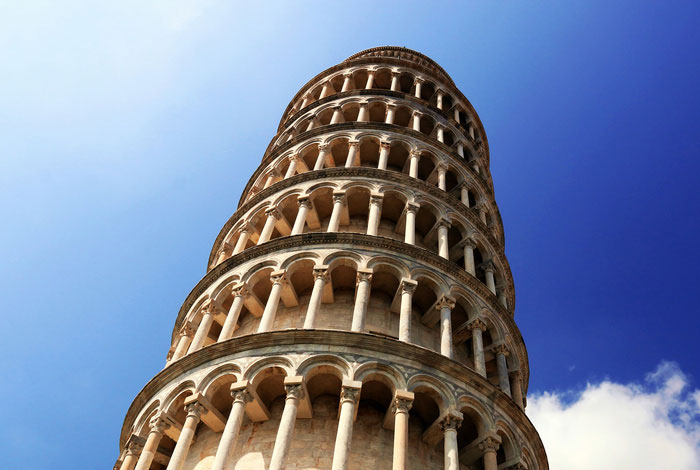 Visit This: The Campo

The list of “bell towers that played a starring role in a Superman film” is very short (see Superman III), so do not leave town without climbing the Leaning Tower. It’s a disorienting half-hour; at times you will feel like you are walking downhill, even as you climb the steps to the summit terrace.

The Cathedral interior was destroyed by fire in 1595, but still houses the tomb of Holy Roman Emperor Henry VII, a Gothic pulpit that narrates scenes from the New Testament, by Giovanni Pisano (1310), and “Galileo’s lamp”. The great Pisan scientist dreamed up his laws of pendulum motion after watching it swing… or so the story goes.

The city’s Baptistery was started in 1152, under architect Diotisalvi, and work continued as architectural fashion was changing. The lower half of the building has rounded arches typical of Romanesque architecture, before rising to the pinnacles and dome that is typically Gothic. Inside is one of the great Tuscan Gothic sculptures, a pulpit by Nicola Pisano (1260).

The northern edge of the Campo is marked by the Camposanto, a monumental cemetery which for centuries was the burial place of noble Pisans. The walls around its massive quadrangle were once covered in frescoes, until the building was hit by mistake by an American World War II bomb. The lead roof melted and the frescoes were irreparably damaged. It is still a fascinating spot to wander, though (and fresco fragments remain) — plus a sanctuary to escape the chaos of the square’s busier sights.

The Museo dell’Opera del Duomo houses the only two remaining original bronze doors from the cathedral. Cast by Bonanno Pisano in 1180, they survived the catastrophic fire of 1595. Hidden away on the top floor is a set of 19th-century engravings by Carlo Lasinio that faithfully record the frescoes from the walls of the Camposanto. See them and weep at the effects of one misdirected bomb in 1944.

Visit This: The Old Centre

The Museo Nazionale di San Matteo is home to “the best of the rest” of the city’s art collection, which spans everything from the sculpture of the 1200s to medieval codices. Highlights include a polyptych (multi-panel painting) by Sienese Gothic painter Simone Martini; and St. Paul by Florentine Renaissance artist Masaccio, the only part of his 1426 Pisa Altarpiece still in the city.

You can’t miss the Palazzo Blu, on the opposite bank of the River Arno — the clue’s in the name, an unusual colour for a Renaissance palace. Upstairs rooms are hung with paintings by artists who worked in Pisa over the centuries, including father and daughter Orazio and Artemesia Gentileschi. The modern art space downstairs is occupied by short-run shows. Kandinsky and Andy Warhol have been subjects of solo exhibitions.

Farther downstream, the tiny church of Santa Maria della Spina is a spiky little Gothic box beside the River Arno — facing the sea, like all Pisa’s ancient churches. Legend says it got its name from a thorn from Jesus’ crown.

The city also has a mural by American painter and activist Keith Haring. Tuttomondo (1989) features his trademark stylized figures and is packed with political allegory. Painted onto the side of Sant’Antonio church, without any preparatory sketches, it was one of Haring’s last works before he died in 1990.

Like its oldest churches, Pisan cooking looks seawards. Until the River Arno silted up in medieval times, Pisa was a major port. Its merchants and navy travelled all over the Mediterranean. You will find squid and cuttlefish in peasant stews, and baccalà alla pisana (salt cod cooked with olives) is another traditional favourite.

As in North Africa and the Middle East — ancient trading partners of Pisa — ceci, or chickpeas (garbanzo beans), are a staple ingredient. Il Montino is an iconic hangout for cecina by the slice, a pizza-like flatbread made from chickpea flour and dusted with pepper or rosemary.

The artichokes of nearby San Miniato (carciofi sanminiatesi) are another delicacy, as are its white truffles. 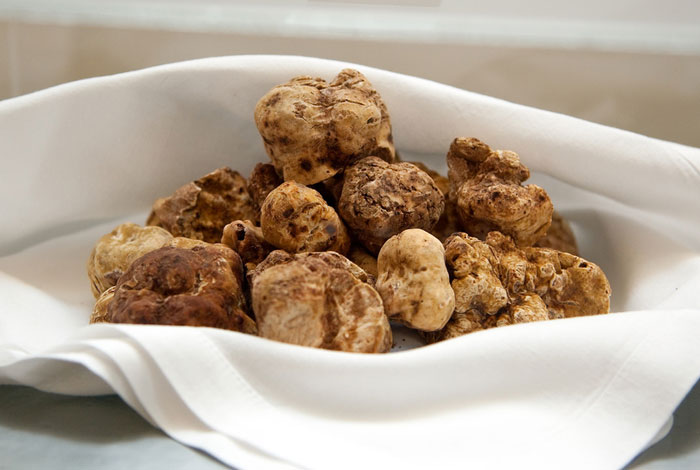 Pisa’s Orto Botanico is an oasis of calm and greenery a couple of streets away from the Leaning Tower. Founded in the 16th century, it is one of the world’s oldest botanical gardens, and plays a role in the university’s research into biodiversity. It’s a lovely place to stroll for an hour, in any season.

Wedged between the city and the sea, the Parco Regionale Migliarino San Rossore Massaciuccoli covers 93 square miles of coastal scrubland — known as macchia or maquis throughout the Mediterranean. The northern stretch includes the lake and marshland of Massaciuccoli. Its flat waters and reed beds are ideal terrain for birdwatchers: black tern and osprey are resident, and the lake is an important stop for several migratory species.

Some of best beaches along Tuscany’s Tyrrhenian Sea coast are just north of Pisa, close to Torre del Lago and especially Viareggio, where the sea front is lined with pay-to-visit beach clubs. At Marina di Vecchiano, there’s a wild feel to the unmanicured sands and dunes that stretches north from the mouth of the River Serchio.

You might not have heard of Piaggio… but you will know their most famous creation, the Vespa motorbike. The company museum, Museo Piaggio is in Pontedera, where the Vespa has been made since it first rolled off the production line as the “Paperino” in 1943. The company’s collection includes vintage Vespa models you won’t see anywhere else.

Calci is home to Italy’s biggest Carthusian monastery, the Certosa di Pisa. The monastery was founded for a closed order in 1366, but most surviving building work is in the elaborate baroque style of the 17th and 18th centuries, with decorative marble and elaborate stucco. The quiet simplicity of the monks’ cells is a complete contrast.

June is festival month. Lamps light up the Arno banks after dark for the Luminara di San Ranieri on the 16th, which celebrates the city’s patron saint. On the final weekend of June, teams from rival city quarters compete in the medieval Gioco del Ponte, on the Ponte di Mezzo bridge across the river.