Grosseto, 8 miles inland from the Maremman coastline, has been around a long time. Few truly ancient traces survive, but the old centre is still wrapped in ramparts built by the Medici Grand Dukes in the decades after they conquered Grosseto and kicked out the Sienese (in 1559).

Today, it’s a small “working” Tuscan city, and often swerved by tourists. World War II wasn’t kind to the suburbs, but the centre is attractive and bustling, with a pretty main square and one of Tuscany’s best archaeology museums.

Grosseto was probably formed as a Roman garrison to guard the Via Aurelia, a coastal trade route from Rome to Pisa, and the mouth of the River Ombrone. The town gained a bishop’s seat in the 1138 and some upgraded fortifications under the Medici in the late 1500s.

Still, however, it remained small. The reason? Most of the coastal Maremma was partially flooded, often totally during the rainy winter. For hundreds of years, Grosseto was a great place to hang out if you wanted to contract malaria.

All that changed when massive irrigation projects were completed in the 1930s. The malarial mosquitoes are gone and Grosseto has thrived as a provincial capital and centre for the Maremma’s agricultural industry.

Grosseto’s sprawling suburbs are far from scenic, but the centro storico is pretty and flat, with cobblestones, plenty of shade and a grid of shopping streets with indie and chain stores.

In the middle of the old town’s finest square, Piazza Dante, is a statue of Leopold II, Grand Duke of Tuscany between 1824 and 1859. Leopold was the last Austrian Habsburg to rule Tuscany until he was deposed just before Italian unification. He’s favourably remembered in Grosseto for creating fertile agricultural plains by draining the Maremma’s swamps.

The Palazzo Aldobrandeschi facing Leopold’s statue looks like a mini-version of Siena’s Palazzo Pubblico, with its top half decked out in neat burnt-sienna brickwork, medieval crenellations and elaborate Gothic-arched windows. During his Ghibelline/Guelph wars with the Pope, Holy Roman Emperor Frederick II stayed in a palace on this site in the 1240s. But not this one, which is an exquisite, century-old neo-Gothic rebuild.

Side-on to the square, beside a Roman column moved here in medieval times, is the Cathedral of San Lorenzo. Its elaborate façade in pink and white marble echoes Sienese architecture (again). Begun in 1294, it too has been much rebuilt over the centuries — part as recently as the 19th century. Art lovers should peek inside for art by Sienese painter Matteo di Giovanni. 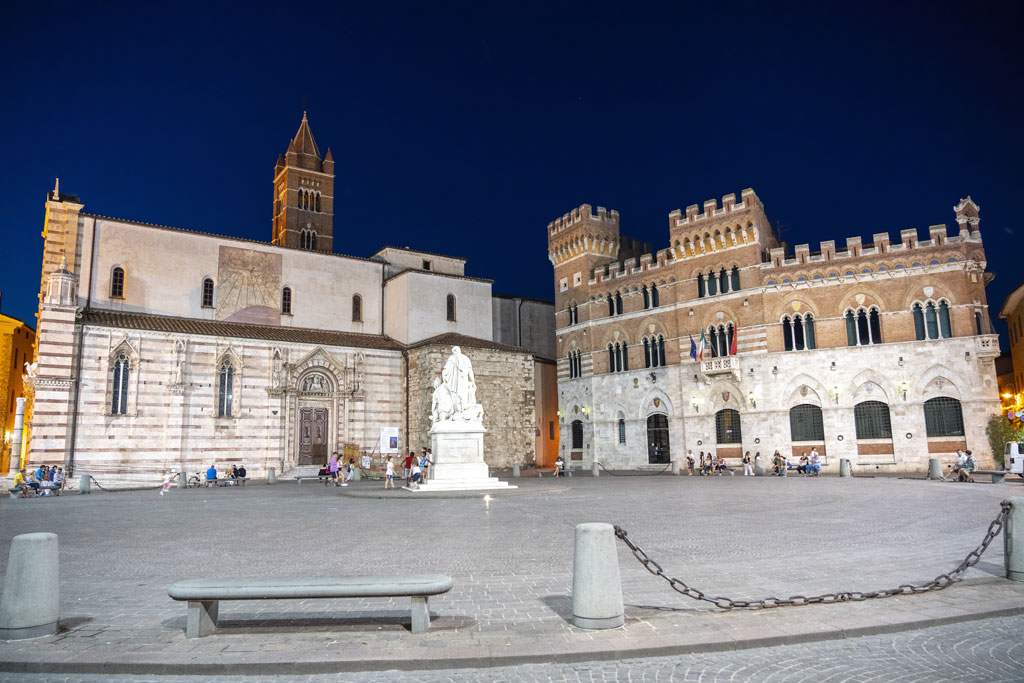 The main “sight” in the centre is Grosseto’s Museo Archeologico della Maremma. The layout is traditional rather than revolutionary, but this is one of Tuscany’s best Etruscan collections.

Major finds come from ancient Roselle, and several capture the moment in history when it was both Etruscan and Roman “Rusellae”. In 49 BC residents were granted Roman citizenship; the museum has a gallery of original statues of wealthy local elites and the first Imperial Roman family (Augustus). There’s also model of Roman baths built during the reign of Hadrian and a relief map of the Maremma in ancient times. Much of it was submerged under a huge inland lake (Lake Prile).

After seeing the collection, it’s well worth visiting Roselle for yourself (see below).

Just outside the northern walls is the Post and Telegraph Building (Piazza Rosselli). Students of architecture will spot the hallmarks of Fascist-era design on its marble and travertine facade, with its mix of sharp modernist lines and neoclassical grandeur . This is the standout building of a small planned expansion of old Grosseto in the 1920s and 1930s.

The main sight in the centre is Grosseto’s Museo Archeologico della Maremma, which has one of Tuscany’s best Etruscan collections

There’s a cluster of cafes inside and just outside the old centre’s southern gate, the Porta del Sale. Also here is Essenza, a natural, vegan and organic food specialist that serves sublime gelato.

The hills inland from Grosseto are within the Morellino di Scansano wine growing region. Dry and robust, Morellino is a relatively new member of Italy’s DOCG wine classification, which denotes the most prestigious growing areas in the country. It’s made with at least 85% Sangiovese grapes, ages well, and costs significantly less than an equivalent Chianti or Montalcino wine.

Out of Town: Etruscans & the Beach

The Etruscan and Roman archaeological site of Roselle is wedged between wooded hills in a remote spot 3 miles north-east of Grosseto. Walking around, you can make out the original Etruscan walls, brick houses from 7 centuries BC and a Roman amphitheatre and forum, built after the Romans conquered Roselle/Rusellae in 294 BC.

Vetulonia, 12 miles north-west of Grosseto, is another former Etruscan town. Trade links with relatively close-by Roselle were complicated by a huge lake that separated them in ancient times. The town’s museum has finds from Etruscan and pre-Etruscan Villanovan cultures; ancient Vetulonia’s remains are signposted just outside the village, as are several tombs in its necropolis.

Nearby beaches at Marina di Grosseto and Principina a Mare are popular with local families — for sands and lots of shade under the parasol pines.