Your first glimpse of Orvieto is not something you forget. This tight-packed city is raised high above the Tiber Valley on a sheer turret of volcanic rock. The old centre’s walls and houses seem to sprout from living tufa stone that props the whole place up.

Once you’ve ridden the funicular to the top — more fun than driving up to visit Orvieto — you’ll find a maze of medieval streets and a cathedral that’s among the great sights of central Italy.

In the Beginning…: Orvieto History

When you see Orvieto’s strategic perch, you can understand why this little patch of land has been inhabited for a very long time. The “high and strange town” — as it was summarised by a 14th-century Florentine poet — was a centre of power and worship for the Etruscans from around six centuries BC, when it was known as “Velzna”. The cult of Etruria’s supreme deity, Voltumna, was probably based in Orvieto. 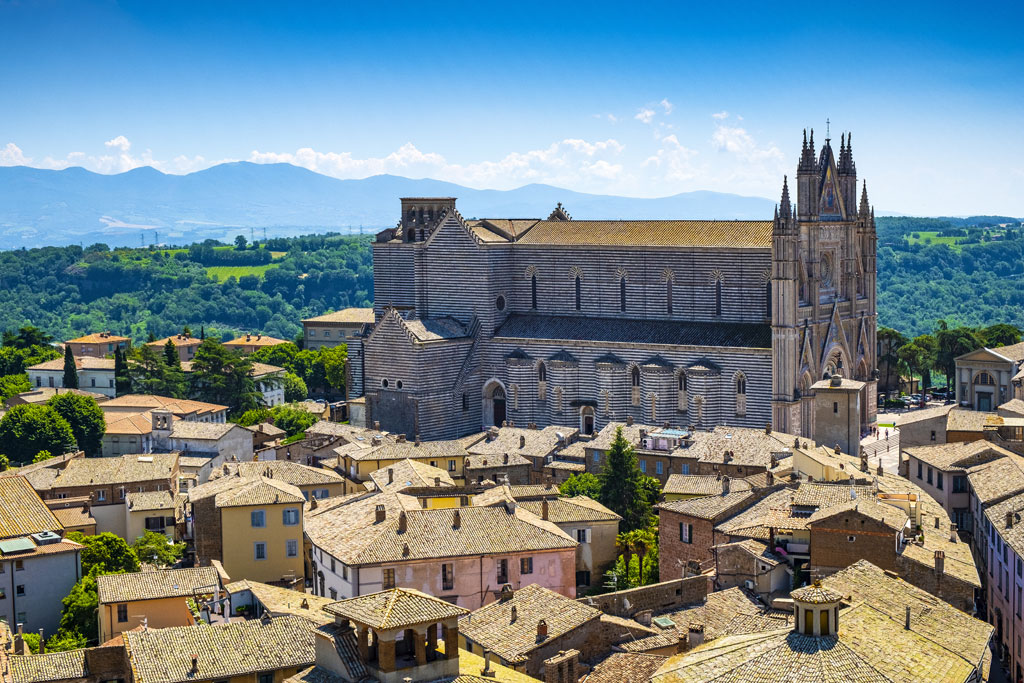 The Romans destroyed it in 264 BC and sent the population to live by Lake Bolsena (now in the neighbouring region of Lazio), but it grew rapidly again as a religious and civic centre in medieval times. Squabbling local noble families almost destroyed it (again) during the Guelph–Ghibelline conflict of the 1300s, until it was annexed by the pope in the 1350s. Like most of Umbria, it remained part of the Papal States until the 1860s.

Its most famous reappearance in the pages of history is during the Siege of Rome in 1527. Pope Clement VII — a member of Florence’s Medici dynasty — fled his capital and holed up in Orvieto.

What to See in Orvieto

Inside and out, the “Golden Lily of Cathedrals”, built from 1290, is one of Italy’s unforgettable art treasures. Its designers threw every colour in the palette at its mosaic façade, though this front’s artistic highlight is Lorenzo Maitani’s understated “Last Judgement” carved into plain stone on the lower-right side.

Inside, the Cappella di San Brizio is frescoed with Luca Signorelli’s equally brutal vision of the end of days. His work was so influential that Michelangelo studied it on his way down to Rome to paint the Sistine Chapel.

The best view over Orvieto is from the top of the 1313 Torre del Moro. The centre’s canyon-like layout, with its four quartieri (Corsica, Olmo, Stella and Serancia), is framed by the winelands beyond the city.

To see Orvieto’s cleverest piece of engineering, you need to head below ground. The Pozzo di San Patrizio (St. Patrick’s Well) was built on the orders of Pope Clement VII, when he was besieged here in the late 1520s. Its twin 248-step staircases are designed as a double helix (like DNA). The idea was that donkeys could be sent down in succession to bring water to the surface and would never get stuck in a donkey traffic jam. 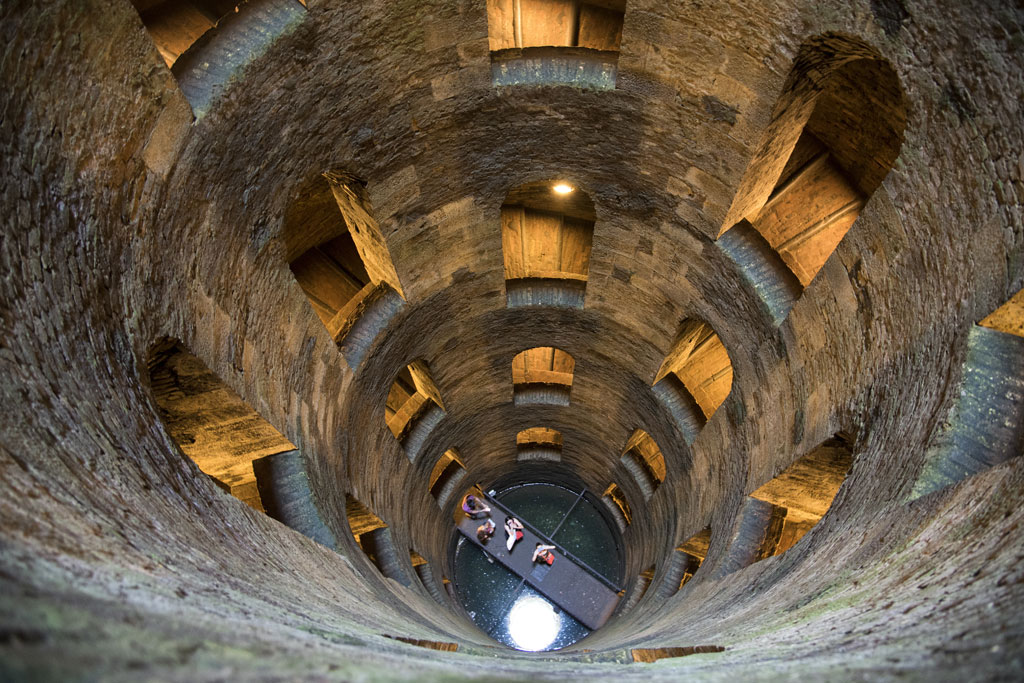 You can walk all the way to the bottom, 62m down; Clement never did: he was dead by the time architect Sangallo finished it in 1537.

The well isn’t the only subterranean sight when you visit Orvieto. The old town sits on a plug of rock that over the centuries has been put to ingenious uses, as a cold store, a pigeon coop, wine cellars, air-raid shelter and many more. To explore this secret world, and understand what’s been going on there for the past 3,000 years, you can join a walking tour run by Orvieto Underground.

The Museo Claudio Faina has one of central Italy’s best Etruscan collections: relics left by the civilization that ruled central Italy in the centuries before Rome. Front-facing upstairs windows provide a photographer’s best angle on Orvieto’s extraordinary cathedral façade.

Orvieto produces one of Umbria’s best wines. Vines cloak the hills to the north-west and south-east of the city.

Orvieto wine is typically delicate, straw-coloured and white. These wines were favoured by the upper classes of Imperial Rome; generals, senators and emperors would import barrels to be brought down the River Tiber to the capital. These days an Orvieto Classico DOC mark signifies wines from the oldest growing zone.

Many Orvieto wine cantinas are open to visitors, and offer tours and tastings. For advice on hours and seasonal openings, check www.stradadeivinietruscoromana.com.

Shopping: What to Buy in Orvieto

Like many other towns in Umbria, Orvieto is a centre for brightly painted majolica-style ceramics. There’s plenty of temptation along busy central streets like Corso Cavour and Via del Duomo.

If you have a deeper interest in Orvieto’s ceramics tradition, the Museo Maioliche has a historical collection housed in a former furnace. Ten rooms are stuffed with medieval and Renaissance pieces, dating to a time when Orvieto was as important as Deruta and Faenza (the root of faïence) in the ceramics world. 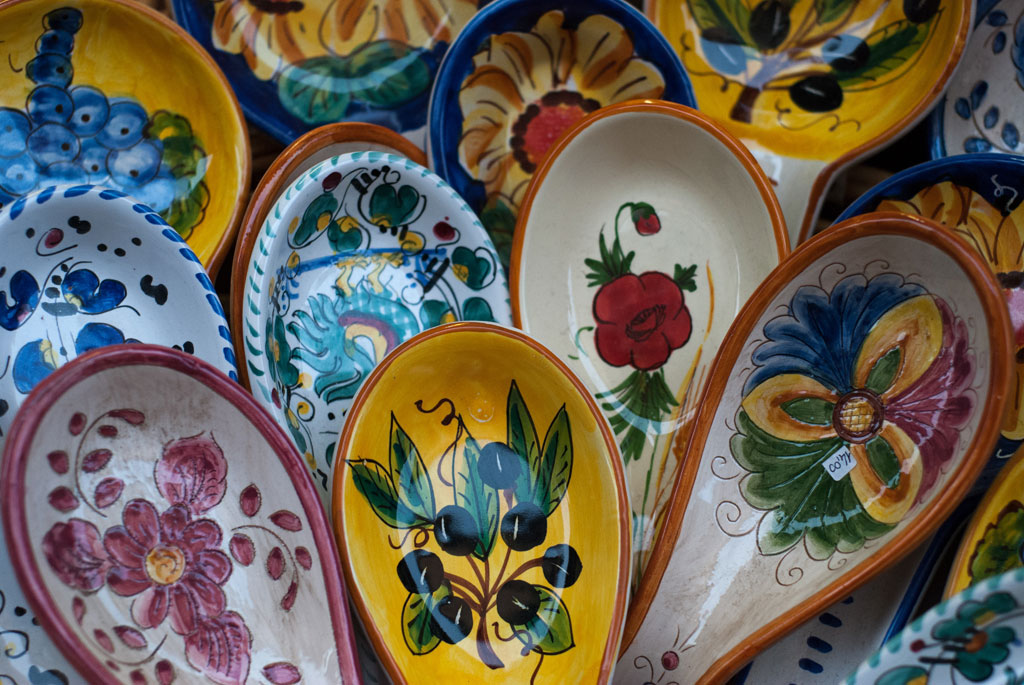 Michelangeli’s stylized wood-cuts have decorated everything from park benches to the interior of Orvieto’s historic Café Montanucci (also on the Corso). The family-run carpentry business is part of the fabric of Orvieto, and has been running for seven generations and counting.

Their bottega shop is on Via Michelangeli. Souvenir-sized pieces include marionettes, animal woodcuts, frames and elaborate wood sculptures.

For Umbrian wine tasting in the centre, local produce to take home, or a traditional aperitivo (truffles, cured meat and cheese), stop in at Bottega Vera.

Corpus Domini is celebrated with parades and medieval pageantry, in a procession which begins and ends at Orvieto’s cathedral. This Catholic festival — known elsewhere as Corpus Christi — has historical (perhaps mythical) roots in Orvieto.

Here, it commemorates the 1263 Miracle of Bolsena, when consecrated bread supposedly bled onto the altar cloth (or “corporal”) in a nearby village church. This “Corporal of Bolsena” is kept inside the cathedral, and is the most important element in the Corpus Domini parade.

Alas, more likely roots for Corpus Christi are found in Liège, Belgium, where Pope Urban IV — who established the feast day by Papal bull — had been Archdeacon.

Corpus Domini moves as Easter moves; it’s the Thursday following Trinity Sunday, which is 8 weeks after Easter. The festival usually falls between late May and mid-June.

Around Christmas and New Year, Orvieto hosts the winter edition of the world-famous Umbria Jazz festival.