There’s a fair chance your first view of Monteriggioni will come from a bus or a car. This small medieval village overlooks the raccordo (main road) between Tuscany’s historic rival cities, Florence and Siena. It looms suddenly around a bend, a complete ring of stone walls and 14 angular towers only partly shielded by the crest of its hill.

In the early 1300s, Dante compared its towers to infernal giants. Monteriggioni still exudes that air. Nothing so thoroughly medieval could survive for so long, and intact, surely?

Monteriggioni looks more like a movie set than a real village. In fact, it never was a proper village. This was a garrison, founded by the Sienese Republic in the 1220s to keep watch on Florence along what was (and still is) the main road between the two.

Monteriggioni drifted into obscurity from the 1550s, when Florence defeated Siena for the final time. Intact fortified gates north (Porta Ponente) and south (Porta Franca), along with a complete circle of 13th-century walls, survived. 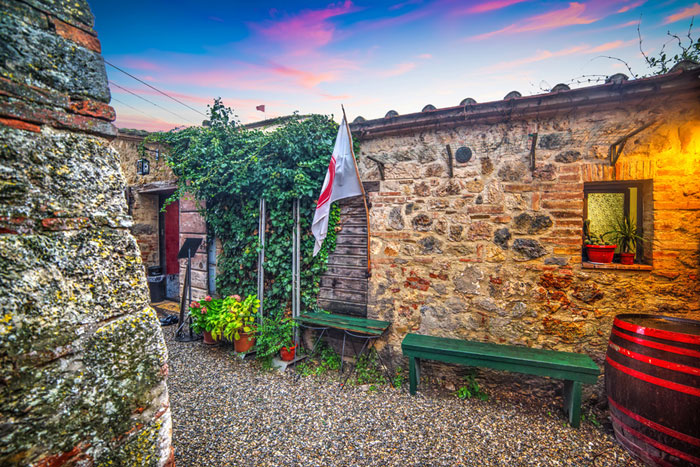 A full circuit of the walls runs to just 570 metres (1,870 ft.), and you can walk much of it, admiring the view out to the Chianti and Val d’Elsa, over olive groves and vines, as well as a unique perspective behind you, downwards onto Monteriggioni’s surviving stone “village” houses. 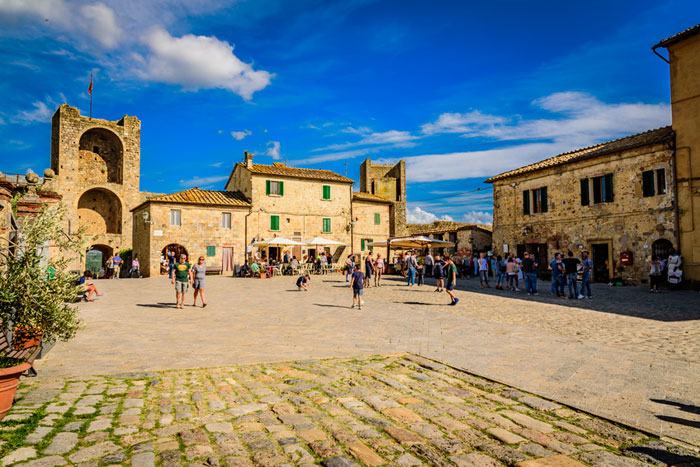 The same admission ticket gets you into the Monteriggioni in Arme Museum, with reproductions of weapons, armour and siege engines, as well as historical snapshots of life in this fortified village during the medieval and Renaissance eras.

Like those extraordinary walls, the simple church of this one-street village, the Pieve Santa Maria Assunta, dates to the 13th century.

Around 3km west of Monteriggioni, Abbadia a Isola is an abbey founded in 1001 and dedicated to St. Salvatore. For more than 3 centuries, the abbey doubled as a hospital — for hospitality, not medical care. Its coffers swelled, thanks to a convenient location beside the Via Francigena, the path trodden by pilgrims from all over Europe heading to the tomb of St. Peter, in Rome.

Its beautiful Romanesque church has a Sienese Renaissance altarpiece by Sano di Pietro.