Thanks to the 18th century revival of Palladianism, the Paduan architect's influence can be traced across the western world, from gentile countryside estates in England to grand houses in America. Yet nothing can measure up to the original designs of Palladio that are exclusive to the Northern Italian region. It is impossible to visit Veneto without experiencing, or at the very least witnessing, the architectural genius of Andrea Palladio.

Regarded as one of the greatest architects of 16th century Italy and one of the most resoundingly influential figures in Western architecture, the region’s countryside is brimming with his famous designs. Commissioned by leading humanists, intellectuals and influential patricians of the Venetian Republic, Palladio’s villas combined practicality with the aesthetic grandeur best suited to his self-aggrandising patrons.

Palladio’s villas were built with their relationship to the immediate landscape in mind, reframing their surroundings as economic, political and cultural counters to the city. These days they offer a tranquil alternative to the busy cities of Venice, Verona and Padua at the height of the season. From his acclaimed La Rotonda in Vicenza to his first ever commission at Lonedo, this guide has attempted the almost inconceivable task of narrowing down the best Palladian villas worth visiting in Veneto.


The best Palladian villas worth visiting in Veneto

The Villa Capra, or La Rotonda, is perhaps the most celebrated and imitated of Palladio’s designs. The hilltop villa is located on the outskirts of Vicenza and was clearly built with great Roman temples in mind. The square plan is perfectly symmetrical, with identical porticoes on each facade and a vividly frescoed circular hall at its centre. It’s hilltop location was no accident either, creating a perfect harmony between the elegant architecture and the breathtaking natural surroundings. You will find nothing but peace at La Rotonda.

For everything Palladio, Vicenza is the city to visit, with over twenty-three buildings attributed to the architect. Whilst you are in the area, be sure to visit the Teatro Olimpico, a masterpiece of Renaissance perspective and illusion. Vicenza’s 15th century town hall, the Basilica Palladiana, was Palladio’s first major public commission, borrowing many architectural motifs from Sansovino’s library in Piazza San Marco. The innovative Palazzo Chiericati is another must-see, now housing the city’s civic museum.

This grand villa at Fanzolo is amongst Palladio’s most minimalist designs and best shows his radical approach to the relationship between architecture and its immediate surroundings. The central raised villa was once the main living quarters of the great Venetian patrician Emo family. It is framed by two barchesse or long porticoed side wings that functioned as stables and storage spaces, hinting at the building's long history as a farming estate.

Villa Emo is one of the finest examples of Palladian grandeur, without airs or pretension. The interior, frescoed by Battista Zelotti in rich Venetian colours, echoes the works of Paolo Veronese and demonstrates the patron’s fine tastes. Explore the rooms of the Arts, Venus and Hercules before taking a turn about the immaculate landscaped gardens.

Palladio’s first commission, Villa Godi at Lonedo was strategically placed on a sloping hillside overlooking the Astico river and rolling Veneto countryside beyond. The views from the central loggia and the sculpture lined semi-circular garden are breathtaking. Inside the symmetrical villa are fresco cycles by artists including Battista Zelotti and Gualtiero Padovano, depicting muses, poets and Olympian gods in luscious arcadian landscapes.

The villa is open to the public all year round and can be booked for private visits, which our award-winning concierge team can arrange for you. The old stables have since been transformed into the Ristorante Torchio Antico, serving traditional seasonal dishes.

Villa di Maser or Villa Barbaro was commissioned by Daniele Barbaro, the Patriarch of Aquileia, a refined scholar of antique architecture and Palladio’s mentor. Inspired by grand Roman residences, the warm facade is guarded by statues of Olympian Gods. Behind the villa is an ornamental fountain and nymphaeum that has been carved into the hill. Visit here for frescoes by Paolo Veronese and sculptures by Alessandro Vittoria.

Wine has had a central role in the life and economy of Villa Barbaro throughout its history. Located at the heart of Montello and Colli Asolani D.O.C., the villa produces award-winning wines which you can taste over a light lunch in their restaurant.

If you have had the pleasure of visiting Venice you may recognise the name of Foscari which has been given to a number of buildings in the city, including the university. The regal Villa Foscari or Malcontenta was commissioned by two brothers, Nicolo and Alvise of the ancient Venetian patrician family.

This harmonious and secluded villa sits on the banks of the River Brenta just a short distance from the Venetian Lagoon. It boasts rich interior decorations by Battista Franco and Gian Battista Zelotti and serene shaded gardens. It is the shortest distance from the centre of Venice where Palladian churches like San Giorgio Maggiore and Il Redentore have transformed the city’s iconic skyline.


Rent a grand villa of your own

If you are as fascinated by these architectural gems as we are, why not immerse yourself in the lavish history of the region and live like a Venetian noble in your own Palladian villa. Our hand-picked villas near Venice and Verona will transport you back to the 16th and 17th century with their beautiful landscaped gardens and vibrant frescoed interiors.

The breathtaking Ca’di Lista on the outskirts of Padua offers the perfect base for exploring the art and architecture rich countryside of Veneto. It is a 16th century hunting lodge built by Dario Variotari, an apprentice of Veronese, and is set within a secluded wine-estate. 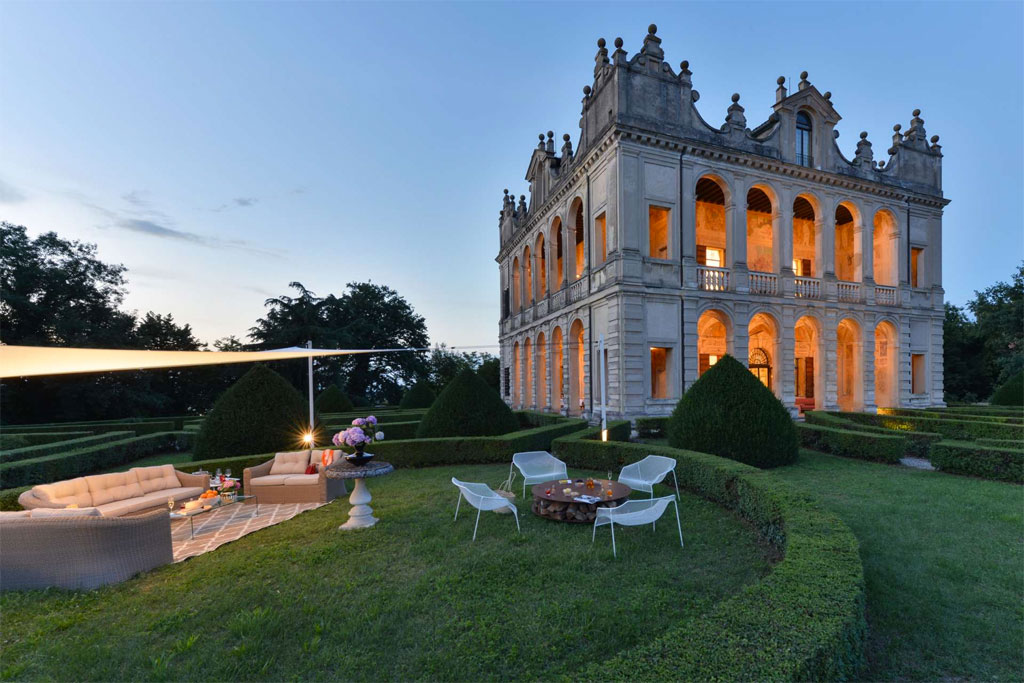 Other notable villas in Veneto

Villa Serego Alighieri: situated at the heart of the Valpolicella Classico region, this extravagant wine estate was first owned by Pietro Alighieri, son of the famous poet Dante. Visit for impressive architecture, fascinating history, the oldest wine cellars in Valpolicella and some of the best wine in Veneto.

Villa Pisani: it might not be the work of Palladio, but this monumental Baroque palace is considered the ‘Versailles of Veneto’. It was once owned by Napoleon and is now a national museum, displaying important works of art from the 18th and 19th centuries.

Villa Contarini: another grand Baroque palace near Padua, this was a farmhouse until the 17th century and some scholars have attributed it’s original design to Palladio. Regardless of its controversial architectural provenance, it is a beautiful estate, surrounded by open parklands and lakes.