“In fair Verona, where we lay our scene”: tourists inspired by Shakespeare’s star-crossed lovers flock to take in the romance of the city. But beyond this Renaissance charm, Verona is a thriving city with a turbulent history and medieval roots.

It is rich in Roman remains as well as Romanesque and Gothic architecture built in Veronese pink stone. The remarkable 1st-century Roman amphitheatre at the heart of Verona’s historic centre hosts one of Italy’s most prestigious opera festivals throughout the summer months each year. The city is home to one of the oldest libraries in the world, a wealth of churches containing famous artistic treasures and well-restored ancient bridges arching over the Adige river which meanders through its centre. Verona is a wholly underrated place with the sprawling vineyards of Valpolicella and Soave and the lapis-blue shores of Lake Garda on its doorstep.

Verona first developed as a settlement between the 4th and 3rd centuries BCE. It became a Roman city in the 1st century BCE and quickly rose in strategic importance, owing to its geographical location which established road links between central Italy and Northern Europe. Traces of the old Roman walls can still be seen today — the Porta Borsari, once the main entrance to the ancient city, and Porta Leoni are two remaining gateways at the heart of Verona’s historic centre.

It was exactly its importance as a military stronghold that saw Verona change hands so many times throughout the course of its history. After a brief occupation by the Ostrogoth king, Theodoric I, Verona was ruled over by Lombard Kings and Holy Roman Emperor Charlemagne from the 8th century

It became its own independent commune in the early 12th century before prospering under the della Scala (Scaliger) family, who were responsible for the construction of the Castelvecchio in the 14th century. It was during the reign of Bartolomeo della Scala that Romeo and Juliet’s tragic love story transpired. Bartolomeo and his brother, Cangrande I also sheltered Dante after he was exiled from Florence in the early 14th century. A statue of the famous poet stands tall and pensive in Piazza dei Signori where he lived for six years. Look out for variations of the Scala coat of arms which can be found all across the city — it features a ladder and sometimes an eagle or pair of dogs.

After yet another short occupation from 1387, this time by the Milanese, Verona fell to the Venetian Republic in 1405. Venice lost the city in 1797 when it was ceded to Austria by Napoleon.

Beginning in the historic centre, the Castelvecchio built in the 1350s is now a museum exhibiting artefacts and Renaissance art from Flemish, Veronese and Venetian artists. The excellently preserved frescoes are offset by the museum's modern interior which was designed by the Venetian architect Carlo Scarpa. If you are a fan of his designs, you will find a wealth of his work in nearby Venice. The Ponte Scaligero connects the Castelvecchio to the historic centre and is a fortified bridge that was first built by the Romans and restored after the Second World War.

Visit Piazza Brà, one of the largest squares in Europe for the Verona Arena. It is the third largest surviving Roman Amphitheatre built in the beautiful pink Veronese stone. It was built in 30 AD and predates the colosseum in Rome. Open-air arias reverberate around the arena from mid-June to early September as part of Italy’s largest outdoor opera festival. For lovers of the arts visiting in the winter months, Verona has you covered; housed in an 18th century theatre, the Teatro Filarmonico offers a varied programme of concerts, opera and ballet. 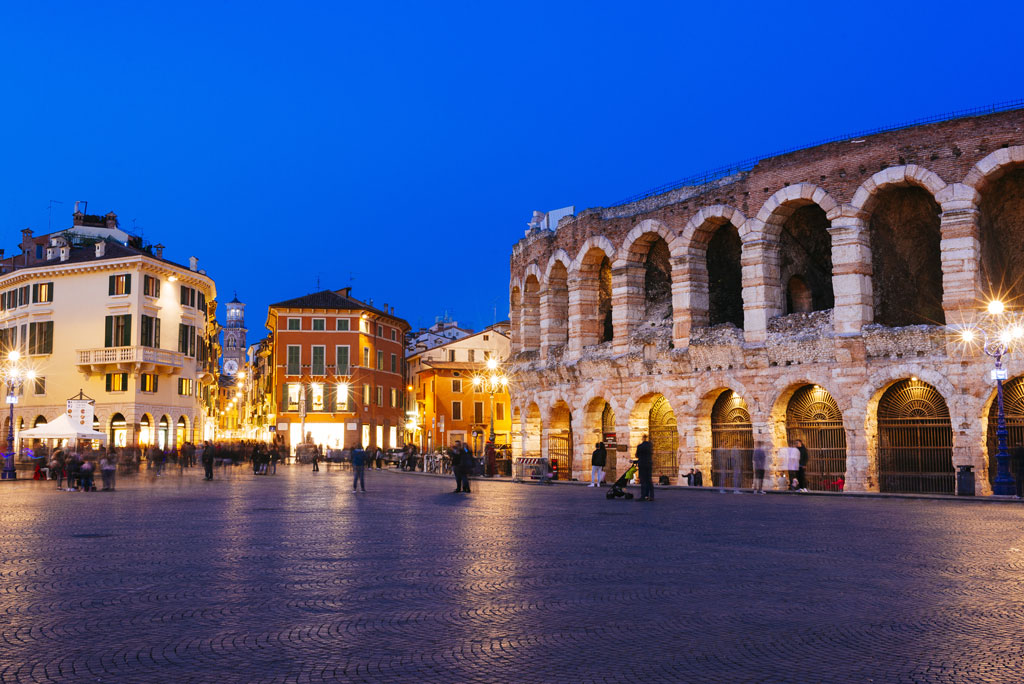 Each day a market is set up in the bustling Piazza delle Erbe, which is a vibrant square lined with restaurants and cafes. Here you can climb the 12th century Torre dei Lamberti for spectacular panoramic views across the city and surrounding mountains. You will also find the famous Casa di Giulietta that lures in Shakespeare enthusiasts and hopeless romantics from all across the globe. It is perhaps the most famous balcony in Europe, with the exception of the Pope’s in the Vatican City. A replica of the bronze sculpture of Juliet by Nereo Costantini replaces the original in the intimate courtyard for the sake of preservation. Visitors are known to caress the sculpture’s right breast in the hope of good fortune.

There are countless great churches in Verona, of which these are just a few of the finest examples. The Cattedrale Santa Maria Matricolare is a spectacular fusion of Romanesque and Gothic architecture that is as impressive inside as out, with its rose-coloured Veronese marble columns, Titian’s “Assunta” altarpiece and elegant frescoes. The Basilica di Sant’Anastasia is an equally superb example of Gothic architecture built between the 13th and 14th centuries with frescoes by Pisanello. Alternatively, the Basilica di San Zeno Maggiore, built between the 10th and 14th centuries, is a triumph of Romanesque architecture. Take in the brick and marble striped facade before venturing inside where you will find intricately carved bronze doors and a beautifully restored altarpiece by Andrea Mantegna. “The Majesty of the Virgin” is a masterpiece of perspective, but unfortunately the three predellas (smaller, bottom panels) are replicas; you will have to visit Paris for the originals. San Fermo Maggiore on the banks of the Adige River is another Gothic gem built in the iconic Veronese stone and San Giorgio in Braida houses two great artworks by Veronese and Tintoretto.

Veneto is a world-class producer of wine and it's the diversity of the region that gives it such a unique edge. From Valpolicella along the shores of Lake Garda to Soave in the hills between Verona and Vicenza, it is no wonder that every April Verona hosts Vinitaly, the prestigious international wine festival.

If you can tear yourself away from our villas near Venice and Verona, enjoy an evening in the historic centre. Start with aperitivo in the Piazza delle Erbe, though neighbouring Piazza dei Signori is less touristy, more authentic and is surrounded by breathtaking architecture. The expansive Piazza Bra is also lined with plenty of cafés. 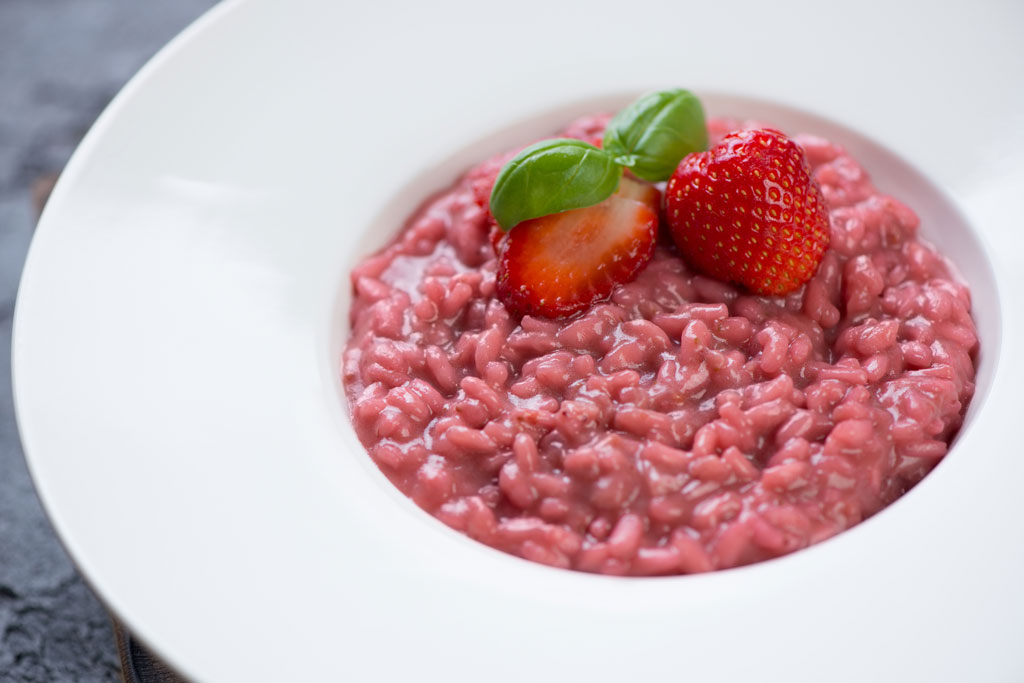 For dinner, you might expect to see the best of the local olives and cured meats, gnocchi or polenta. But you shouldn’t leave without trying a risotto; lots of rice grows just outside Verona. If you’re after a heartier dish, bollito misto is a stew made with beef and chicken, boiled in stock, and served with a bread sauce. Donkey (“asino” in Italian) is a popular local meat, particularly in a ragu.

If you’ve come for romance, one of our favourites, right by the amphitheatre in the centre of the old town, is the Michelin-star Ristorante Il Desco. In the summer, ask for a table out on the piazza. It is an excellent place for a sophisticated meal; ask our concierge for advice on the best restaurant for your group.

Just like Chianti in Tuscany, the Valpolicella wine region just outside of Verona offers breathtaking views of hilltop towns and olive and cypress groves. It is well worth a visit, whether that be for a scenic drive or to tour the best vineyards and sample the local produce. Alternatively, the 13th century Castello Scaligero di Soave to the east of Verona is a fortified medieval town and the namesake of the renowned Soave wines of the region. 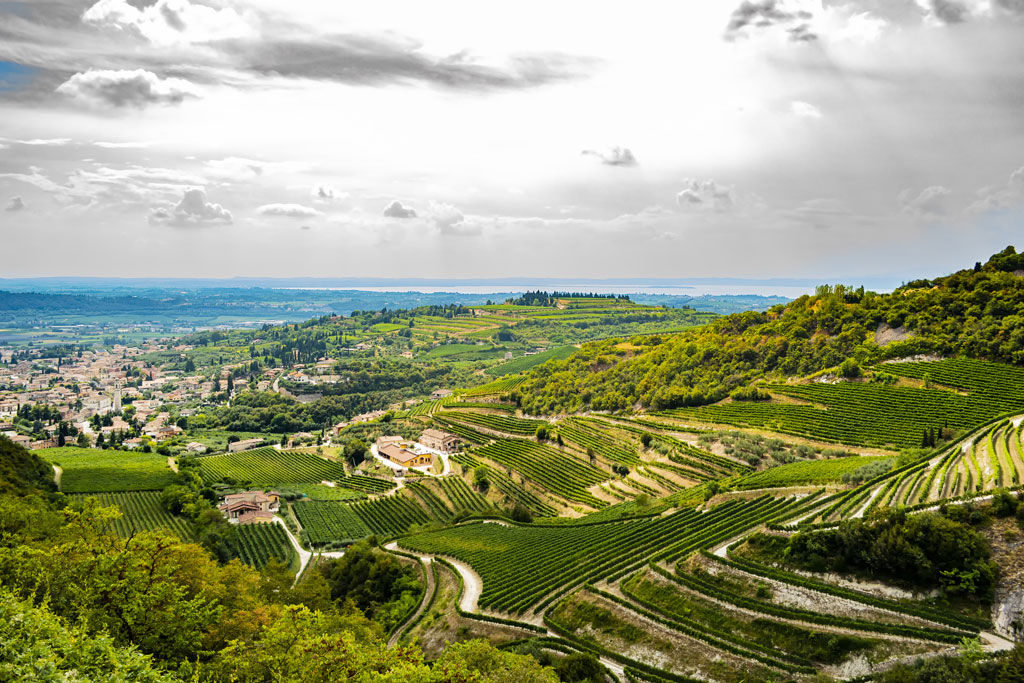 Sirmione is a picturesque village and thermal spa town on the southern shore of Lake Garda; visit for excellent beaches and Rocca Scaligera, a medieval castle overlooking the water.

If you have a penchant for Italian hilltop settlements and do not mind venturing slightly further afield, Ferrara di Monte Baldo is a must-see. The Santuario Madonna della Corona is a church that has been built into a vertical cliff face, appearing as if suspended between the sky and surrounding landscape.

For the best views of Verona and the winding Adige river, take the Funicolare or cable railway to the Castel San Pietro. Wander the old ramparts and take a moment's pause to gaze out from the panoramic viewing platform.

For perfectly manicured Renaissance gardens with tiered terraces and grand fountains, cross the Ponte Nuovo from the historic centre and take a stroll about the Giardino Giusti. Or for something a little more fast pace, try rafting along the Adige river.

Amidst Verona’s history is a thriving and modern city. Head to Via Cappello, Corso Porta Borsari and the pedestrianised Via Mazzini for clothes and artisanal craft and food. Corso Sant’Anastasia is a must for produce like salami, locally produced olive oil and wines of the region. This city has a wealth of unique shops from vintage clothes, to glassware and quality Italian paper.

Vicenza: less than 30 miles east of Verona, with the Soave wine region between the two cities, visit the birthplace of one of Italy’s finest Renaissance architects, Andrea Palladio. His many works in the city include the Teatro Olimpico and Villa la Rotonda.

Mantua: 20 miles south of Verona, Mantua sits just outside of the Veneto in Northern Lombardy and is a beautiful city surrounded by lakes with its own Ducale palace. Shakespeare enthusiasts who are drawn to Verona for its star-crossed lovers will know Mantua as the city where Romeo was banished. Our 17th Century Palladian Villa Zambonina is situated perfectly between the two cities, where you can live and luxuriate in the rich past of the Veneto.

Keep reading
Veneto Cuisine & Food Venice The Ultimate Luxury Villa Stays in Italy: How to Stay in your own Palazzo
Browse all our villas near Verona
Like
Share
Follow
Previous article
Next article