Venice, ‘La Serenissima’, is one of the most talked and written about, venerated and immortalised places on earth. The entire city is a masterpiece of architecture and engineering, built across a network of over 118 islands and raised on wooden piles driven deep into the ground. A world heritage site in north-eastern Italy, each timeless campo (square) is adorned with a renaissance or gothic church. Reflected upon the surface of each picturesque canal are the brilliant marble and istrian stone facades of palazzi, once homes to noble Venetians and merchants dealing in sumptuous spices and silks.

You won’t be short of surprises in Venice just by following your feet. In fact, the Renaissance sculptor, Jacopo Sansovino is thought to have said that “this word VENETIA signifies VENI ETIAM, that is, come again, and again, for however oft you come, you will always see new things, and new beauties.” The city has so much to offer beyond Piazza San Marco and this guide offers our selection of the very best sites to occupy your time with. We challenge you not to start planning your return trip before your first is over. 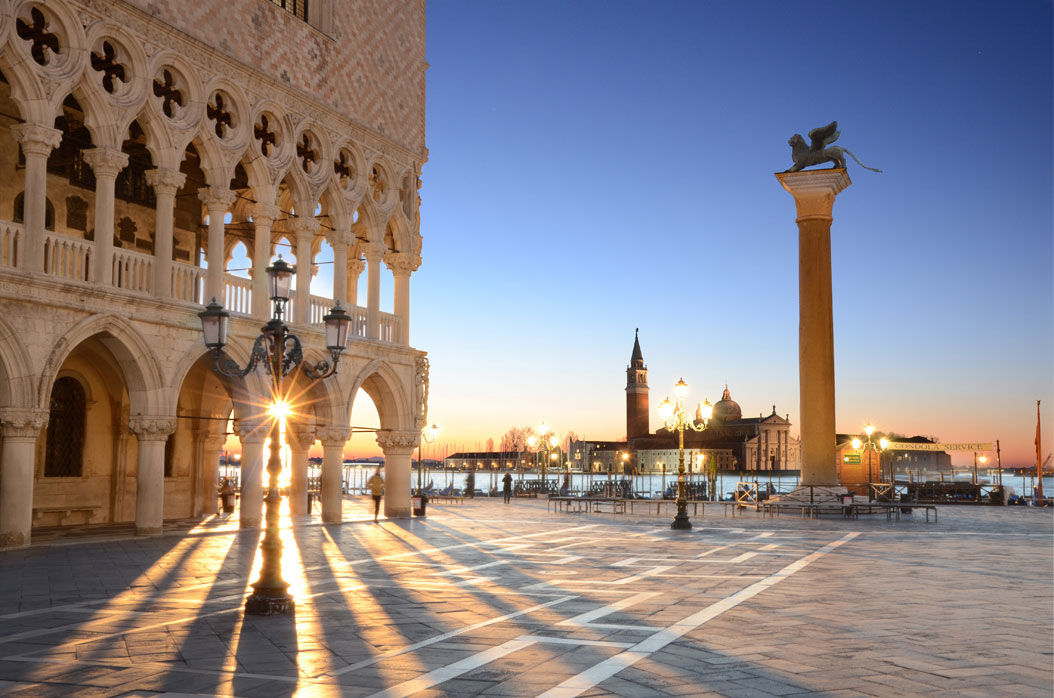 For as long as Venice has existed, it has created and embellished its own origin stories. It was supposedly founded in the 5th century by refugees, but the real myth-making didn’t begin until 828 AD, with tales of the preordained journey of Saint Mark from Alexandria. Saint Theodore was the original patron saint of Venice. He now stands atop one of the two pillars in the Piazza San Marco with his back to the water, his successor, the lion of Saint Mark at his side.

By the 12th century, the Venetian Republic had established itself as a leading imperial and naval power. Its close ties with Constantinople and trade routes throughout the East are responsible for the city’s unique blend of Western and Byzantine architecture. The iconic gilt bronze horses on the facade of the Basilica are one example of many treasures that made their way to Venice following the Sack of Constantinople. By the 14th century the Maritime Republic was the most prosperous city in Europe, the epicentre of Mediterranean commerce and the gateway to the East. It was a truly cosmopolitan city, boasting some of Italy’s finest artists from Titian and Tintoretto to Veronese and Bellini.

The Republic fell in 1797 to Napoleon, who thought the Piazza San Marco so beautiful that he had the church of San Geminiano, with its ancient foundations, demolished to build a palace overlooking the Basilica; a palace he would never inhabit. The building now houses the Museo Correr, where you can tour the richly decorated Neo-Classical and Imperial rooms and admire the fine sculpture of the great Antonio Canova.

The best time to visit Piazza San Marco is first thing in the morning when it is least busy. If you are visiting in the winter months and can stomach the earlier start, arrive in time to see the sunrise over the Basilica and Grand Canal for an unrivalled and intimate experience. Book in advance for the Palazzo Ducale and admire the lavish decoration of the Doge’s apartments, enormous canvases by Vittore Carpaccio and a tour of the prisons and armoury. For a less crowded experience of the Basilica di San Marco, try attending morning or evening mass — you can enter freely from the Porta dei Fiorio on the north side of the building. 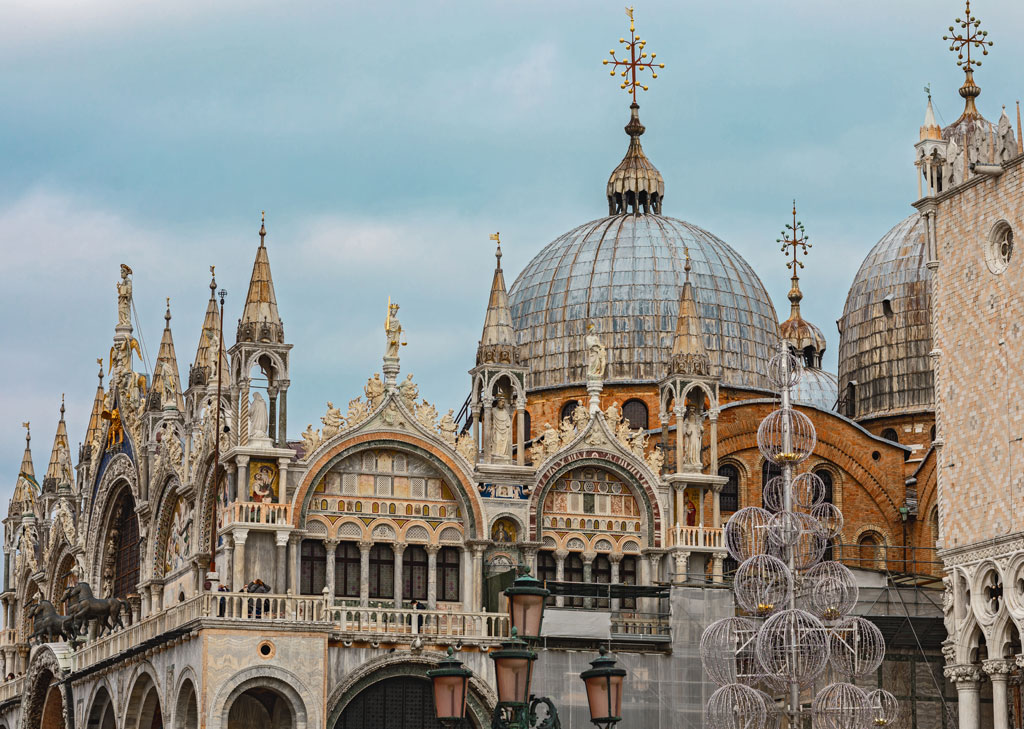 The museums, Scuole Grandi and churches of Venice display artworks by some of Italy’s finest painters. The Accademia houses grand narrative cycles by Carpaccio, Mantegna and Titian. It is also home to Veronese’s “The House of Levi” which landed the artist in trouble with the Inquisition. For some of the finest works by Tintoretto that took two decades to complete, visit the Scuola di San Rocco. The artist won the Scuola’s patronage by giving the institution two paintings for free.

Italy’s most influential architect, Andrea Palladio, designed Venice’s great churches of San Giorgio Maggiore and Il Redentore. Each year, the Festa del Redentore takes place on the third Sunday in July and was traditionally intended to celebrate the end of plague in the 16th century. A pontoon bridge is built across the Grand Canal and the city turns out for parties, fireworks and grand regatas. For a quieter experience, the Frari is one of Venice’s finest examples of Gothic architecture, housing Titian’s “Assumption” and the tomb of Canova.

Modern and contemporary art lovers from all across the world come to Venice for the international Art and Architecture Biennales, held each year between the months of May and November. Pavilions are scattered all across the city in some of the most beautiful palazzi and museums and are free to enter. The Peggy Guggenheim houses the heiress’s personal collection of art in her former home; an incomplete, single-story, 18th-century palazzo on the Grand Canal. It is a building that isn't lacking in its own eccentric past. Regardless of your artistic sensibilities, it is well worth a visit to the Arsenale just to take in the magnificent scale of the space where the Venetian Republic built their formidable naval fleets.

Venice also has a fine musical heritage. Concerts are held from September through October as part of the Festival of Contemporary Music. The composer Vivaldi was Venetian, and in the Teatro La Fenice you’ll find one of Italy’s marquee opera houses. Verdi’s operatic masterpieces “Rigoletto” (1851) and “La Traviata” (1853) both premiered at La Fenice.

If you are as captivated by the city as we are, then why not also live at the heart of Venice’s lavish past. From your own grand Palladian Villa Zambonina, decorated with frescoes and trompe l’oeil paintings, to the luxurious Ca’ di Lista, a 16th century hunting lodge designed by Veronese’s apprentice, Dario Variotari — our villas near Venice and Verona offer the perfect base for exploring the Veneto. 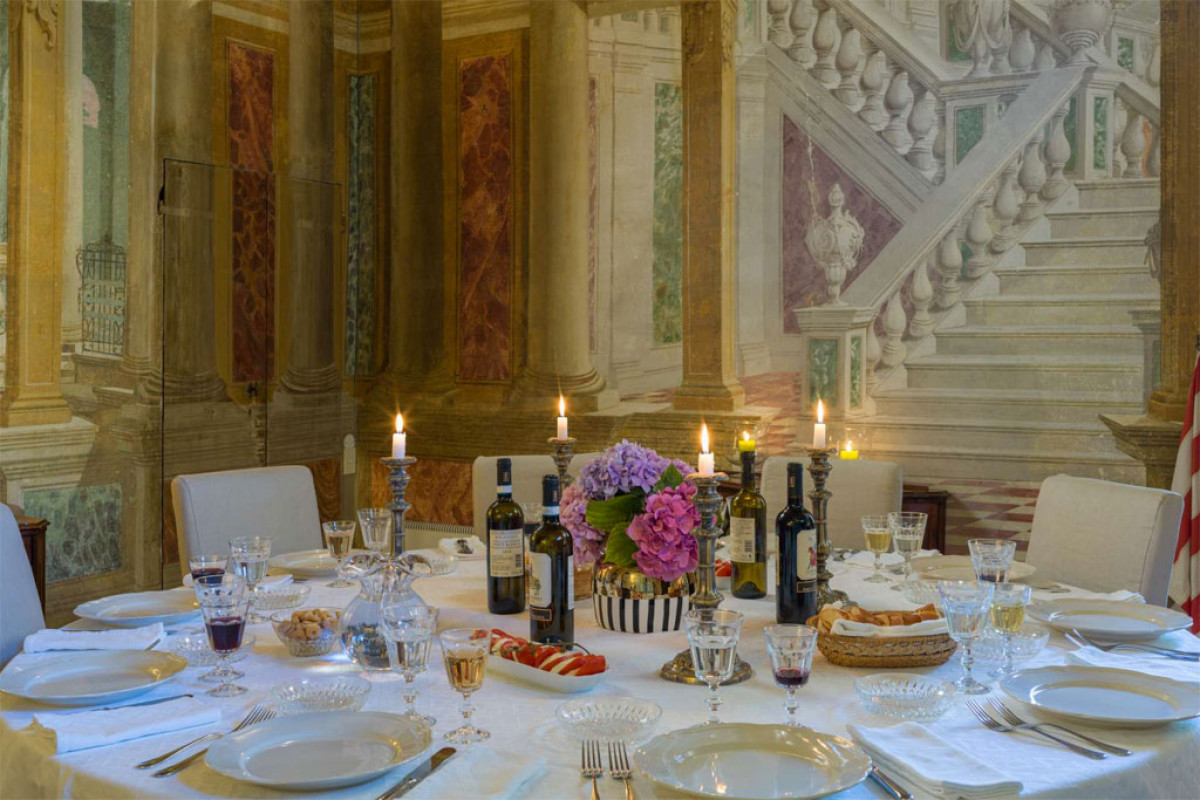 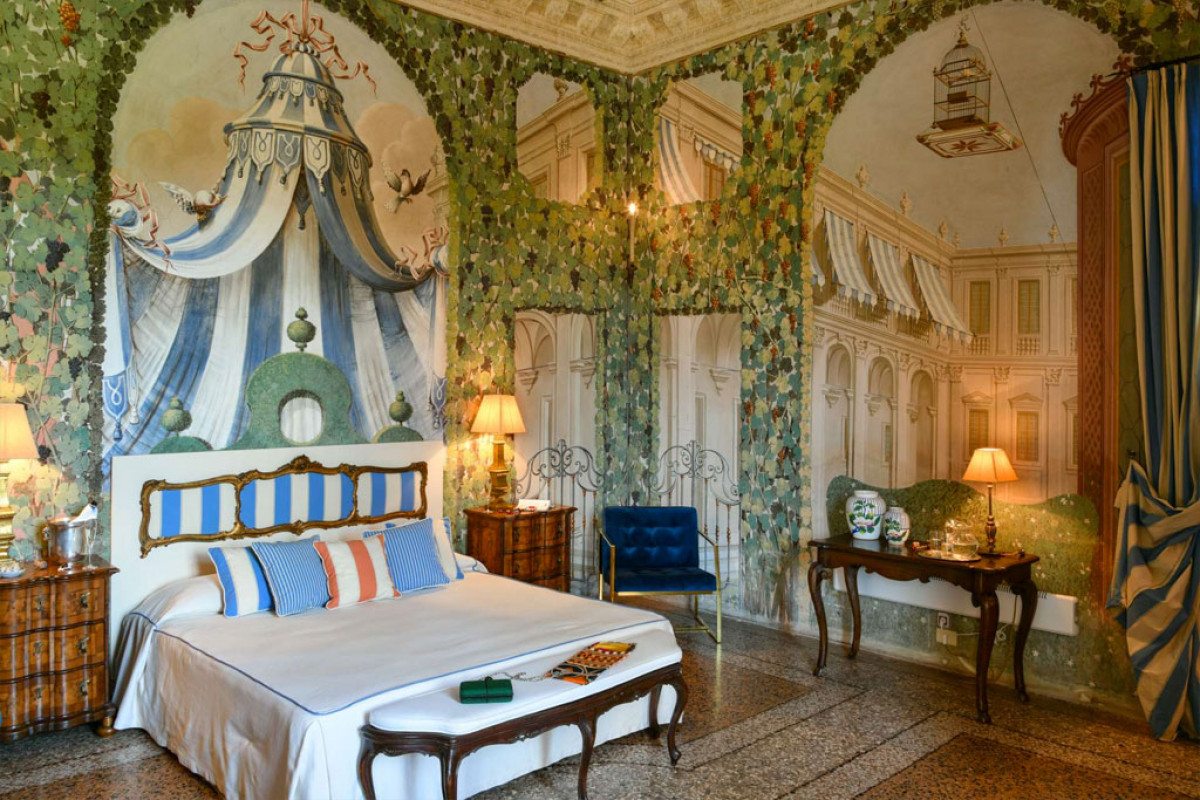 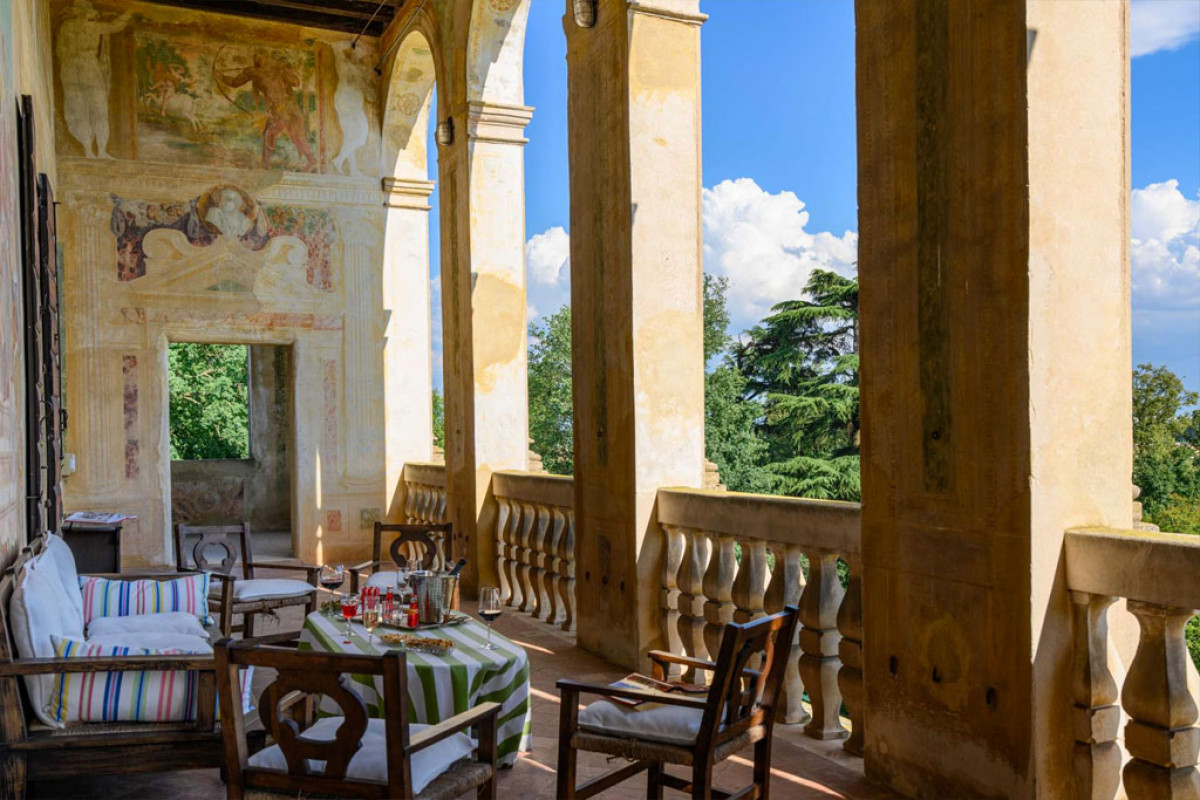 Venice is the capital of the Veneto, which is one of Italy’s most culinarily diverse regions, taking in the alpine foods from the Dolomites to the seafood-rich Venetian cuisine. It is the birthplace of prosecco and tiramisu. For a true Venetian experience when dining, avoid tourist hotspots around Rialto and San Marco. Try the lesser visited sestieri of Cannaregio, Dorsoduro and San Polo; our concierge can offer specific recommendations for the best restaurants in your area. 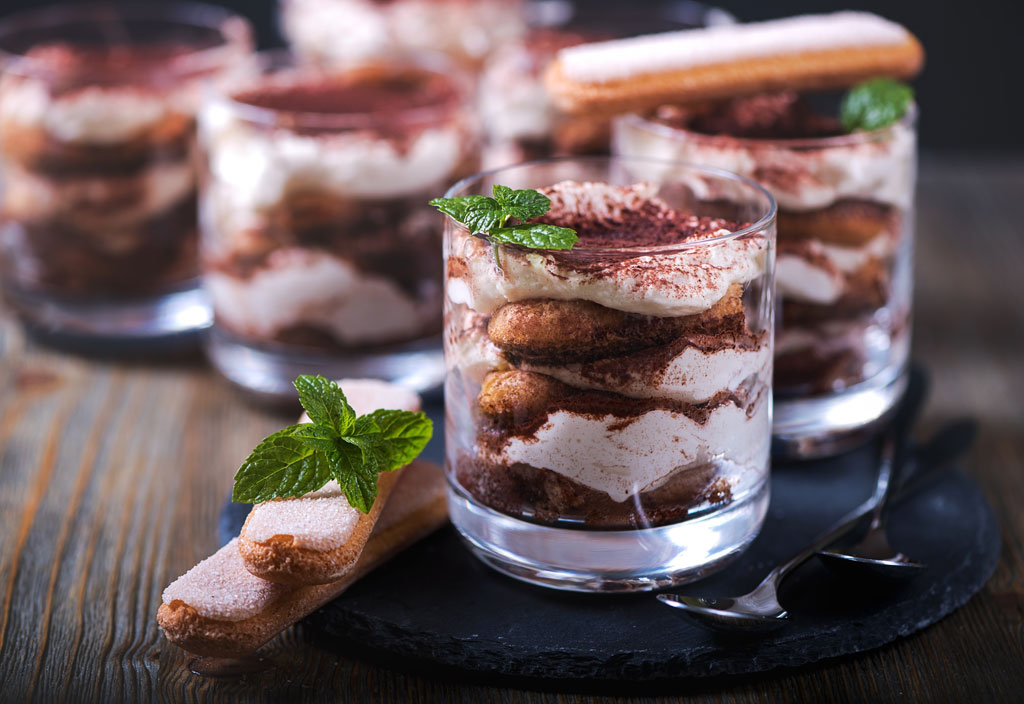 The spiritual home of the seafood-rich Venetian cuisine is its fish market, the Mercato del Pesce near the Rialto. Fish from the lagoon, the Adriatic, and further afield start their day here — be sure to visit early to make the most of the thriving atmosphere and fresh produce on offer.

Venice also has fine wine on its doorstep: white Soave and the reds of Valpolicella, including thunderously concentrated, almost black Amarone della Valpolicella.

Some of Italy’s most sought-after olive oil oozes from the presses along Lake Garda’s eastern shore. The Garda Orientale DOP mark on the label is a reliable indicator of quality.

Read more about the food of Venice here.

The outlying island of Murano is famous for its glassmakers and it is here you can witness the delicate art of glassblowing. Venice Glass Week takes place in September, showcasing and celebrating the best of the craft. It is the safest place to go if you are looking to invest in original glass pieces. Be careful to avoid the mass-produced souvenirs that are sadly no longer made in Venice.

Visit Burano for lacemakers and iconic photo opportunities of the vibrant and colourful buildings. Torcello is a quieter island where the lagoon’s oldest church, Santa Maria Assunta has stood since the 7th century. The 8th century golden mosaics inside are rivaled only by that of the Basilica di San Marco. For lovers of the outdoors, the island is now predominantly a nature reserve where wild flamingos can be spotted in the spring months.

On Lido, the island that separates the lagoon from the sea, is a long stretch of sandy beach, perfect for sunbathing and swimming throughout the warmer months.

The biggest names in luxury fashion, from Prada to Gucci can be found predominantly along Calle Larga XXII Marzo and around Piazza San Marco.

Fondaco dei Tedeschi is an impressive luxury department store near Rialto and is housed in a beautifully restored, 15th century palazzo. The building is organised around a grand central courtyard with a rooftop terrace that offers exceptional views over the city.

Keep reading
Veneto Cuisine & Food Italy’s 7 Most Beautiful Cathedrals and Where to Visit Them Drinking like an Italian: How to do Aperitivo in Italy
Browse all our villas near Venice
Like
Share
Follow
Previous article
Next article
Searching for your villa