Just 40km east of Venice, Padua is often overshadowed by its famous neighbour, but this vibrant university town has a rich artistic, literary, scientific and religious heritage of its own. The setting of Shakespeare’s “The Taming of the Shrew”, it is also most renowned for its 14th century Scrovegni Chapel, with deeply emotive frescoes painted by Giotto, and the Prato della Valle, Italy’s largest square. Founded in 1222, Padua University is one of the oldest in the world and is heralded by scholars as the birthplace of modern medicine.

Amble alongside the 13th century canal or wander the arcaded streets lined with shops and trattorias in the city’s centre. Padua is a wholly underrated place that offers the perfect balance between important historic monuments and a thriving, modern, commercial city.

According to legend, Padua was founded in the 12th century BC by the Trojan hero and advisor, Antenor, making it one of the oldest cities in Northern Italy.

The citizens of Padua established a constitution in the 11th century and elected their own governor. The city was divided amongst the great Northern Italian families of d’Este and Da Romano, enjoying a lengthy period of relative peace and prosperity until the 13th century. It was during this time that work began on the Basilica di San Antonio and one of the world’s oldest universities. Padua has been home to a number of notable figures, including the famous poet, Dante in the 14th century and Galileo Galilei who taught at the university from 1592 until 1610.

The city was governed by the Carrara family from 1318 to 1405 before becoming a part of the Venetian Republic. During the years of Venetian rule, Padua was fortified with new walls and a series of six monumental gateways that still exist today. The university became the main educational centre of the Republic who certainly understood the value in putting their name to such a renowned institution of science and medicine.

From a leading Italian Commune in the 12th and 13th century to the leading economic centre it is today, Padua has a rich cultural heritage and is a lively, well-lived-in city.

Padua is teeming with celebrated landmarks and perhaps the Scrovegni Chapel is the most famous of them all. It contains some of the most well preserved frescoes that were completed in 1305 by Giotto, a pioneering artist who pathed the way for Renaissance greats a century later. You will not easily forget the azure blue ceiling, trompe l'oeil marble or expressive detail in the narrative paintings of the Virgin and Christ. Be sure to book in advance for only a limited number of visitors can enter the chapel at a time. Arrive early and explore the rest of Padua’s Musei Civici Eremitani complex located on the same site for other fine works of art. Just next door is the 13th century Chiesa degli Eremitani, well worth a visit for the painstakingly restored frescoes of Mantegna and the incredible wooden ceiling that resembles the hull of a ship.

Wonder along the cobbled Via Porciglia and take in views of the Piovego Canal, the city’s main waterway. It was built in the 13th century in order to link Padua directly with the River Brenta and the Venetian Lagoon.

Venture into the historic centre for the Gothic Palazzo della Ragione or Palace of Reason, which sits between twin squares; the medieval Piazza della Frutta and the grand Piazza delle Erbe are known for their fruit and vegetable markets. The palace dates back to 1218 and was the original civic and economic centre of the city. At the beginning of the 14th century, the upper floor was transformed into a single expansive great hall, also known as Il Salone, with a unique, wooden, keel-shaped roof. Visit here for detailed and vibrant frescoes by Giotto depicting astrological cycles. These days, the palace’s outer medieval porticoes house shops selling a variety of meats, cheeses and fish. 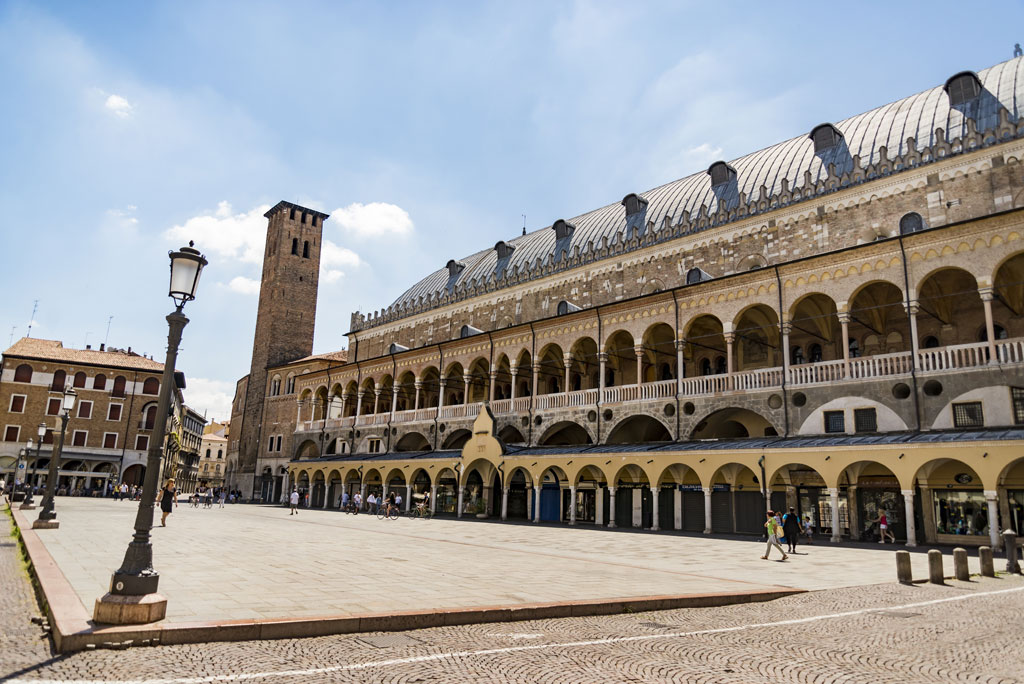 The Palazzo della Ragione in Padua

The Piazza dei Signori is another picturesque square in the centre of Padua and is lined with arcades sheltering numerous shops and cafes. With the Torre dell’Orologio and column balancing the winged lion of Saint Mark, it bears a certain resemblance to the Piazza di San Marco in Venice.

Another of the city’s most important monuments is the nearby Palazzo Bo situated at the heart of the University of Padua. It is difficult to imagine it now, but human dissections used to take place in the palace’s elegant central courtyard. Take a guided tour of this Renaissance building where you can see the world’s first permanent anatomical theatre. 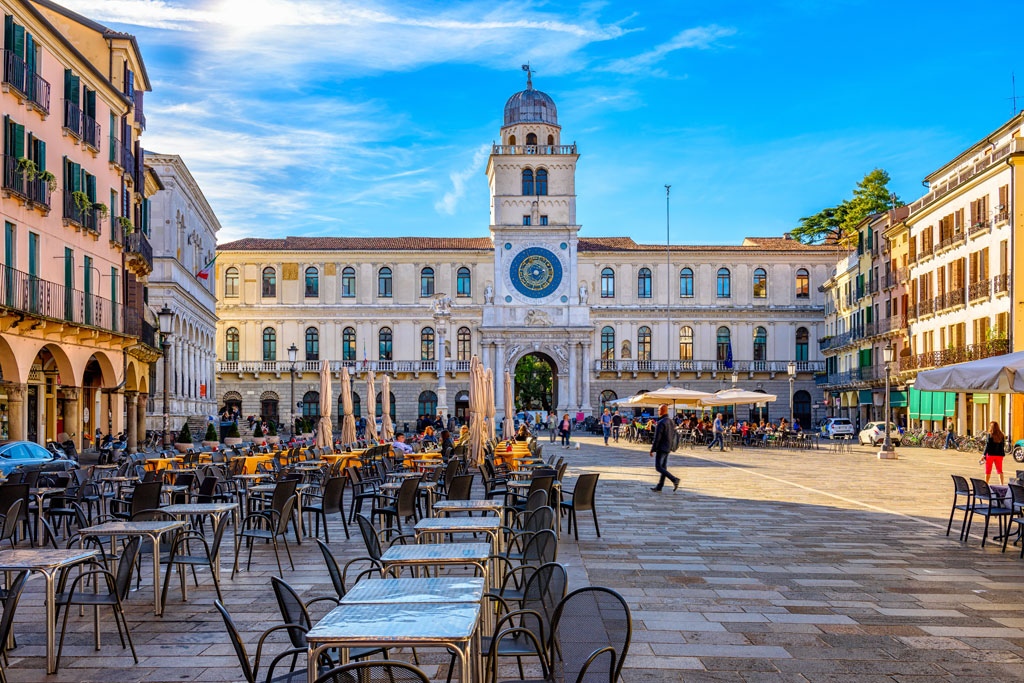 Take in the austere brick facade of the Duomo, Padua’s cathedral that was consecrated in 1075. To it’s right is the Romanesque baptistery containing vivid and well preserved 14th century frescoes by Giusto de Menabuoi.

The most famous of Paduan churches is the Basilica di Sant'Antonio da Padova, known to the locals as Il Santo. The 14th century religious monument was heavily inspired by the Basilica di San Marco in Venice and contains the tomb of Saint Anthony of Padua in its own lavish marble chapel. Sculptures and reliefs by Donatello decorate the high altar and his impressive equestrian bronze statue, “Gattamelata” stands proud in the piazza just outside.

The history of coffee is rich in Padua, in fact, its first mention in Europe dates back to a 16th century work by the then director of the university’s botanical gardens, Prospero Alpini. Its rise in popularity amongst fashionable bourgeois circles of the 18th and 19th century resulted in equally lavish cafés opening and serving the drink. The Pedrocchi Café is a grand neo-gothic establishment that was once a popular haunt of famous intellectuals such as Lord Byron and Ernest Hemingway; visit here for a pastry and espresso in a beautiful historic surrounding.

The city is not short of excellent coffee houses that line its buzzing streets and piazzas. The Pasticceria Graziati first opened in 1919 and is one of the oldest pastry shops in Padua. It is renowned for its millefoglie cakes and La Pazientina, an elaborate layered cake and Paduan speciality that you won’t find anywhere else.

Visit the Mercato Sotto il Salone sheltered in the porticoes supporting the Palazzo della Ragione for artisanal foods from across Veneto, one of Italy’s most culinary diverse regions. Here you will find an exquisite array of fresh bread, meat and fish, cured salami and prosciutto, fine cheese and hand-made pasta.

It is not possible to visit Veneto without exploring the wealth of grand villas and summer palaces that enhance the landscape, once belonging to influential Venetian nobles. Our award-winning Concierge Team can arrange a visit to the 16th century Villa Molin that overlooks the canal on the outskirts of the city. It was built by the leading architect of his time, Vincenzo Scamozzi who inherited many of Palladio’s unfinished projects after his death.

For monumental Baroque palaces fit for a doge, surrounded by beautiful parkland and lakes, visit the Villa Contarini and Villa Pisani. The latter was owned by Napoleon after the fall of the Republic and is now a national museum displaying important works of art from the 18th and 19th centuries.

If you are feeling inspired by these lavish estates, why not live like a Venetian noble in a villa of your own. The remarkable Ca’di Lista lies just outside of Padua on the grounds of a private wine estate and is a perfectly symmetrical hunting lodge with immaculate Italianate gardens. If you can bear to leave the frescoed loggias for an afternoon, it offers the perfect base for exploring Padua and the region beyond. 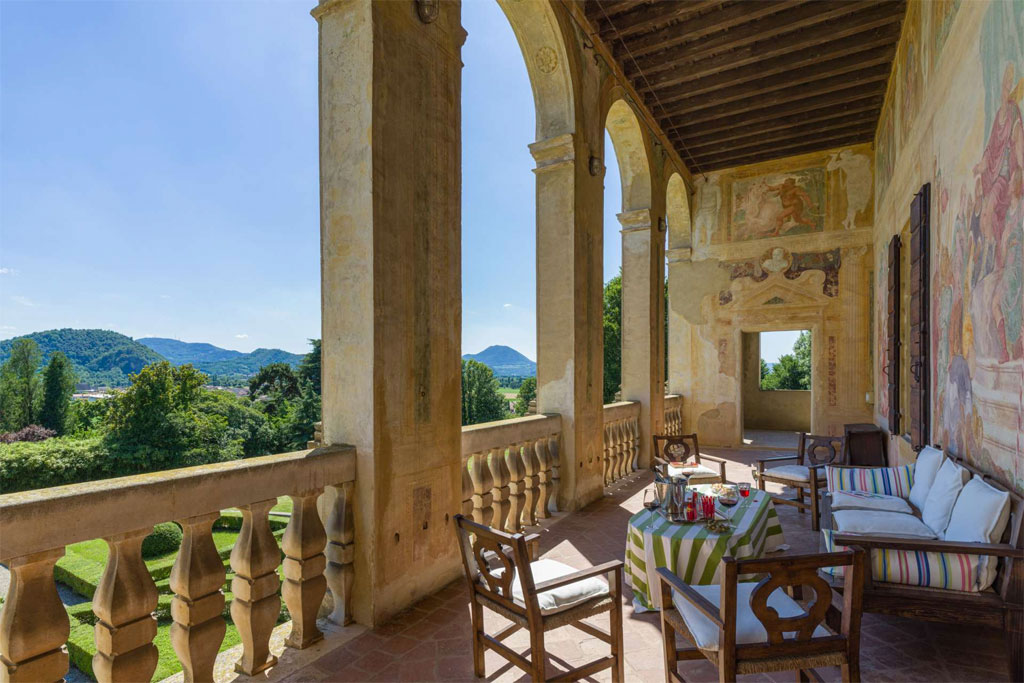 Relax in the thermal baths at Abano Terme, a spa town at the foot of the Euganean Hills that has been attracting visitors for over 2000 years. Hike or cycle along one of the trails through the regional park and immerse yourself in the rolling landscape. For lovers of the sport, there is also a 27-hole golf course on the outskirts of the city.

For picturesque canals, elegant palaces and frescoed facades without the entourage of tourists you’ll find in Venice, visit the wholly underrated Treviso. Cittadella, north of Padua, is also well worth the excursion for the incredible medieval wall that surrounds the city.

An iconic symbol of Padua and Italy’s largest square, the Prato della Valle is a must-see whilst you are visiting the city. It is a vast oval piazza enclosed by a canal where statues line the manicured central island.

To the east of the piazza is the University’s botanical garden, which dates back to 1545 and is considered the oldest in Europe. Much more than just a historic monument, it is an important site for the conservation of biodiversity.

If you love an Italian market, then Padua is the city to visit. For an experience that will excite all of your senses, colourful markets are held daily in the Piazza delle Erbe and Piazza della Frutta, selling fragrant flowers, succulent fruits and vegetables, spices and herbs. Stalls selling clothes, jewellery and leather often spill out into the neighbouring Piazza dei Signori.

Market stalls also transform the Prato della Valle every Saturday and flea markets are held in the expansive square on a monthly basis. Touch up on your farmers’ market etiquette with our Guide to Navigating Italian Markets.

For high street fashion and luxury brands explore the main shopping streets around Via Sant’Andrea, Corso Giuseppe Garibaldi and Via Santa Lucia.

Venice: whilst it is possible to park in Venice, it is just 25 minutes by train to Santa Lucia. From there you can take the Vaporetto along the Grand Canal, passing brilliant marble palaces and the famous Rialto Bridge before arriving at Piazza San Marco.

Vicenza: the birthplace of Andrea Palladio, Italy’s celebrated 16th century architect. His many works in the city include the spectacular Teatro Olimpico and Villa la Rotonda.

Verona: visit the romantic city that inspired Shakespeare for Ancient Roman gateways, the Verona Arena and the international Opera Festival. There are countless churches with famous works of art, piazzas, palazzos and museums worth dedicating your time to here.