Did you know that each capital atop the columns that line the arcade of the Ducal Palace tells a story? Each one is carved with a different narrative scene from court life, some romantic, some tragic. If you are staying in one of our luxury villas near Venice or Verona look out for these extra special details in the Piazza San Marco and get to know the iconic Basilica on a more intimate level.

1. The Horses of Saint Mark sojourned once in Paris

As iconic as the Basilica itself, the gilt bronze horses first arrived in Venice in the 1200s, following the fourth crusade. They are thought to have come from the Hippodrome of Constantinople and most likely date from the 2nd or 3rd century AD, although this is often debated. Some have tried to attribute the Horses of Saint Mark to the great Ancient Greek sculptor, Lysippos, others think they came from Persia; in reality, they are probably Roman.

In 1254, after narrowly avoiding being melted down, the Horses of Saint Mark were positioned on top of the Basilica. Along with their thrifty belief in the recycling of materials, the Venetians loved their political symbolism, and the bronze horses were the ultimate trophy from a defeated Byzantine Empire. This was a sentiment Napoleon agreed with when he had the horses removed to Paris around 6 centuries later.

From 1797, the Horses of Saint Mark graced the top of the Arc de Triomphe du Carrousel in the Tuileries Gardens. However, their Parisian holiday was cut short by the Austrians in 1828 who safely returned the bronze horses to Venice following Napoleon’s defeat at Waterloo. The French struggled to get over the loss because the quadriga sculpture that replaced the bronze horses looks remarkably familiar…

They made their final move in the 1980s inside the basilica itself so you can witness these almost life-size horses up close, so exquisite they almost seem alive. That’s correct — you’ll have to brave the queue (or visit in the winter months) if you want to see these majestic ancient treasures in the flesh; the horses on the facade are mere replicas.

2. The columns on the Basilica’s facade were used to balance ships loaded with spoils of war from Constantinople

The Basilica of Saint Mark that we recognise today was consecrated in 1094 — by then, it was the third church to occupy the site since the Evangelist first arrived in Venice 250 years before. Doge Domenico Selvo oversaw a great deal of its construction and ordered every Venetian merchant returning from the East to bring fine marbles, sculptures and carvings with them to adorn the basilica.

Many of the decorations on the St Mark’s facade are spoils of war from Constantinople. While also prized treasures, the columns taken from the East also served a practical function, helping to balance the weight of laden ships.

The Venetians were pioneers of medieval sustainability; any leftover materials were reused and there are now more than 500 columns adorning the basilica’s facade. Uniquely crafted, classical 3rd-century capitals and Egyptian porphyry columns have been combined with medieval imitations so that despite the disparate origins of each piece, the basilica maintains a serene symmetry.

3. Until the 19th-century the Basilica was a private chapel for the Doge

It is hard to believe that from the 15th to 19th-century, the Basilica di San Pietro in Castello acted as Venice’s cathedral, even with Andrea Palladio among its designers. Placed in one of the city’s outer districts it had no hope of competing with the Basilica di San Marco. 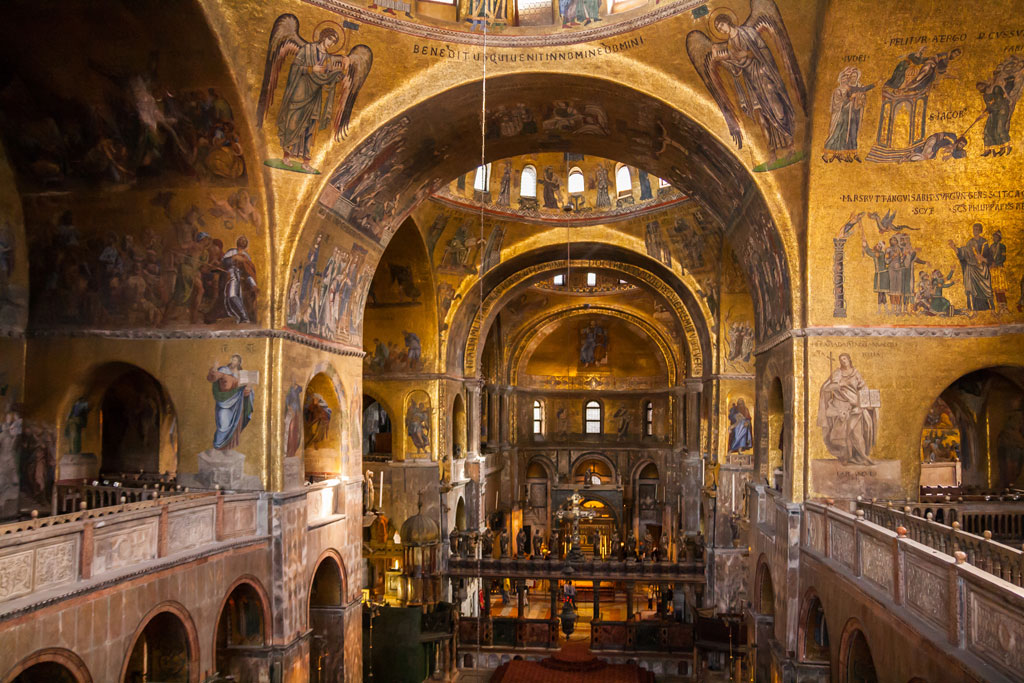 The interior of St. Mark's Basilica with domes covered in gold mosaic dating from between 1160 and 1200

However, until 1807, the famous Venetian landmark was the private chapel of the Doge. The South Portal, or “sea gate”— which originally opened onto the lagoon — acted as his private entrance into the Basilica, sitting adjacent to a doorway into the Ducale Palace. A porphyry group of tetrarchs stand to the left of the southern portal, another prized treasure taken from Constantinople in the 1200s.

Following the fall of the Venetian Republic in the 19th-century, the Basilica was officially made the city’s cathedral and it’s been a “bucket list” tourist destination ever since.

4. The gilt mosaic over the north portal is the only original to survive from the 13th-century

The front or west facade of the Basilica di San Marco features five arched portals (“doorways”) that open onto the church’s atrium, each decorated with gilt mosaics from the life of Saint Mark. Exposed to the elements, the mosaics have undergone considerable restoration and some have even been replaced entirely, including the Last Judgement over the main portal (a 19th-century addition). 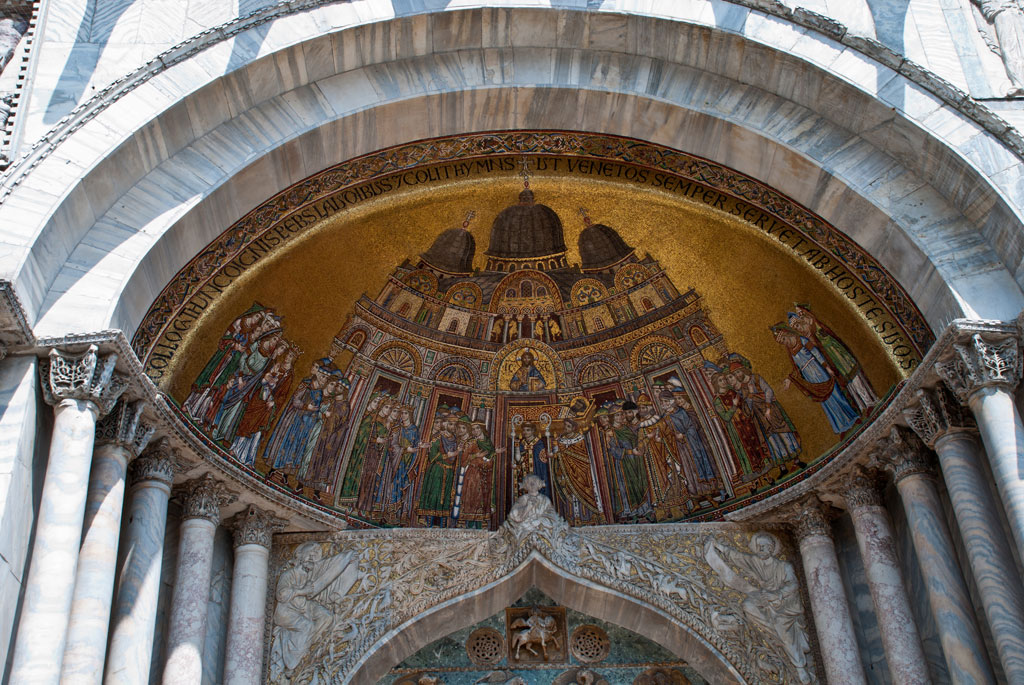 The North portal mosaic depicting Saint Mark's body being carried into the basilica.

The mosaic over the north portal — the furthest to the left of the basilica’s main facade — is the only one that maintains its original 13th-century composition. The mosaic depicts Saint Mark’s body being carried into the basilica with the four bronze horses already positioned over the central portal.

For a good idea of what the other mosaics would have looked like in their prime, visit the Accademia and admire Gentile Bellini’s “The Procession in Piazza San Marco”. The artist's breathtaking topological accuracy has been an important resource for conservators and a fascinating reference point for those interested in the history of Venice.

5. A porphyry circle in the central doorway marks the spot where Frederick Barbarossa submitted to Pope Alexander III

For a little bit of context, Frederick Barbarossa, the Holy Roman Emperor was hellbent on what he considered the “restoration” of imperial rule in Italy. He dedicated much of his life to several Italian campaigns, struggling to impose himself on the individual city-states. In the 1160s, the likes of Venice, Milan, Padua, Mantua and Verona formed the Lombard League in unity against the German invaders.

In 1177, Venice helped bring peace to Italy by reconciling Pope Alexander III — widely accepted as the rightful pontiff — and Frederick Barbarossa, thus ending 17 years of bitter conflict. Just over a year before, the Lombard League crushed Barbarossa’s army and he narrowly escaped with his life, so the Holy Roman Emperor didn’t have much choice in the matter.

The Basilica is the only building still existing in the Piazza di San Marco to witness this historic event. The fact then, that the Venetians saw fit to mark a pretty substantial and embarrassing blow to Barbarossa with a porphyry plaque is quite something. (It’s not cheap!) On that porphyry spot in the central doorway of St Mark’s over 800 years ago, Barbarossa knelt before the Pope and received the kiss of peace… It didn't last long.