As the capital of the Renaissance, Florence is not only home to some of the best museums in Italy; some of the city’s finest masterpieces are housed in its many, many churches. We all know the spectacular Duomo, Santa Maria del Fiore — let’s face it, the city’s romantic skyline wouldn’t be the same without Brunelleschi’s Dome — but there are also plenty of unassuming or relatively unknown churches worth discovering in Florence. Not only are these great places to uncover the city’s true pulse — many are still active places of worship — but they also afford us the privilege of witnessing great works of art in situ.

If you are staying in one of our villas in Florence, read this guide to our favourite churches off the beaten track and the fascinating world awaiting you behind each closed door.

The Best Churches to Visit in Florence

The Basilica di Santa Croce is probably the most famous church in Florence after the Duomo. A masterpiece of Gothic architecture, work began on the church and Franciscan convent in 1295 but was not completed until 1442. Since then, it has witnessed over seven centuries of Florentine history and art, including the addition of its neo-Gothic marble facade and campanile in the 19th-century. 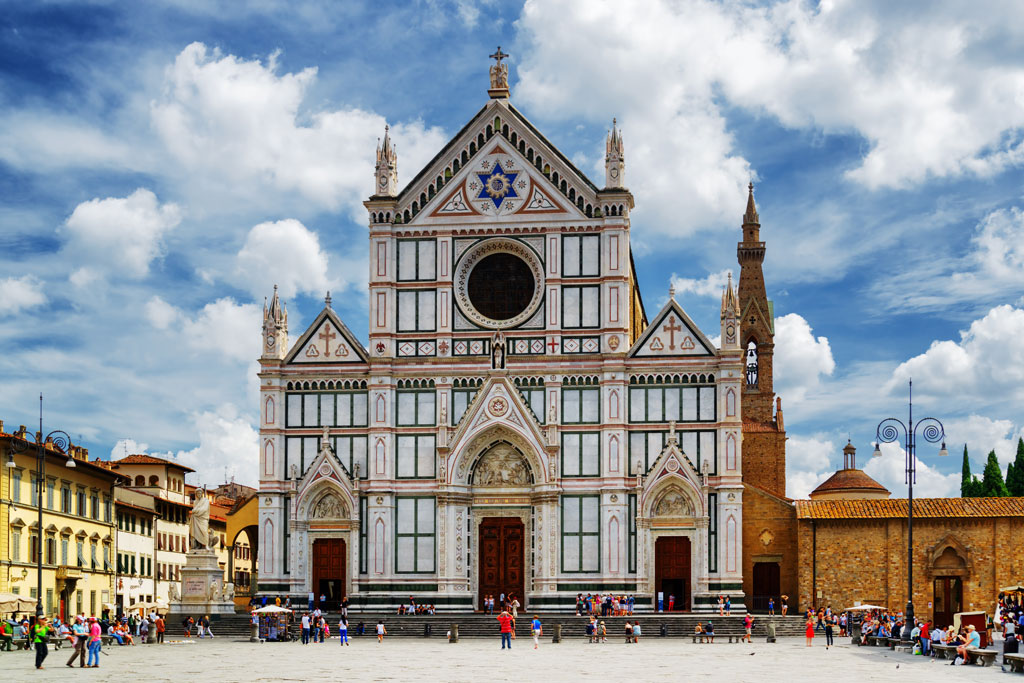 This monumental religious complex is a treasure trove of Italian masterpieces, housing artworks and sculptures by Donatello, Vasari and Bronzino, as well as the tombs of famous Florentines like Galileo, Michelangelo, Dante and the formidable Machiavelli.

It may be one of the better-known churches in Florence, but Santa Croce is far more peaceful on a summer’s day than the city’s main museums. Marvel at the beautiful stained glass windows from the 14-19th centuries before taking a moment to sit and reflect in the utterly serene cloisters outside.

You cannot miss: A real gem at Santa Croce are the fresco cycles from the lives of Saint Francis, John the Baptist and John the Evangelist in the Bardi di Vernio and Peruzzi chapels. These were all painted by the 14th-century master Giotto, the founding father of Italian figurative art.

There’s a total of 16 chapels at Santa Croce — lookout for Brunelleschi’s incredible, renaissance Pazzi Chapel in the cloisters and Bronzino’s “Christ’s Descent into Limbo” in the Medici Chapel. You’ll also find Vasari’s “Last Supper” in the refectory along with frescoes by Taddeo Gaddi, a follower of Giotto, as well as Cimabue’s “Crucifix” in the sacristy.

There has been a church and convent on the site of Santo Spirito since the 13th-century, but work on the current Basilica di Santo Spirito did not begin until the 1430s. One of the leading examples of Renaissance architecture in Florence, Brunelleschi began designs for the new church as early as 1428, but only lived to see the first two years of its construction. The architects that took over after his death may have tempered his ambitious vision ever so slightly, but the grand scale of the nave, lined with grey sandstone (“pietra serena”) columns is still a serene space to behold.

The bare facade — which was never finished — may not be as visually striking as the highly decorative, marble Santa Maria Novella or the Duomo, but this is still a very special church. It sits just off the Santo Spirito square which hosts a vibrant market every morning and is a point of pride for local Florentines. This is authentic Florence at its best.

You cannot miss: Michelangelo’s wooden “crucifix”, now housed in the sacristy, which the artist completed at just 17 years of age. It is said that the young master would study the anatomy of corpses at the convent’s hospital, which inspired the sculpture of Christ. There are also several important altarpieces housed at Santo Spirito; look out for Filippo Lippi’s “Pala Nerli” and a nativity scene by Ghirlandaio.

One of the first great basilicas in Florence: Santa Maria Novella

Santa Maria Novella is easily one of the most beautiful churches in Florence; it is an absolute must-see while you are in the city. Work on the Gothic basilica and Dominican monastery first took place between 1278 and 1350, but its intricate marble facade was a later Renaissance addition between 1456-70. It was one of the most important religious and artistic centres in Florence so it is no surprise the frescoes inside the church, cloisters and chapterhouse were completed by great artists including Masaccio, Ghirlandaio, Filippino Lippi and Paolo Uccello. 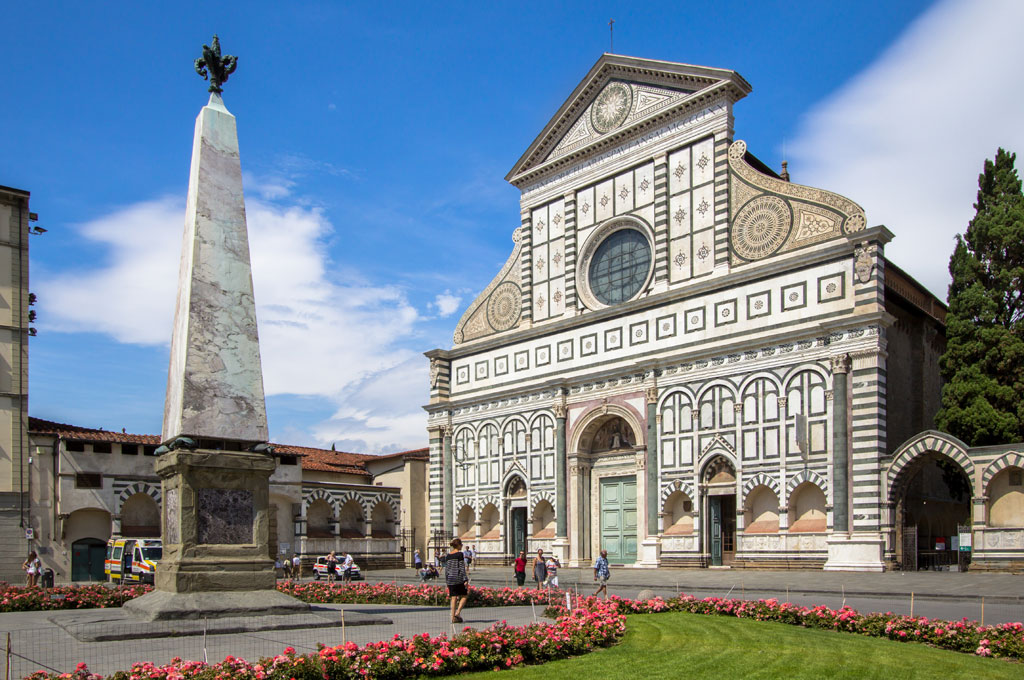 You cannot miss: Giotto’s “Crucifix” in the central nave, Brunelleschi’s “Crucifix” and a nativity scene by Sandro Botticelli. Beyond the incredible triple nave, with its lofty vaulted ceiling are many frescoed chapels as well. Look out for the Strozzi Chapel for frescoes of the life of Saint John the Evangelist by Fillipo Lippi — one of the artist's last works before his death. Ghirlandaio and his school — including an apprentice Michelangelo — completed the frescoes from the life of the Virgin Mary and John the Baptist in the Tornabuoni Chapel as well.

The Basilica di Santa Trinita dates back to the 11th-century, offering a glimpse into Florence’s pre-Renaissance past. Like many churches, it has been rebuilt and adapted countless times over the centuries. Yet, while the facade may be typical of late-Renaissance, Mannerist architecture in Florence, the Romanesque interior points to far older origins. 11th-century mosaics were even found beneath the floor, which are now housed in the Bargello. 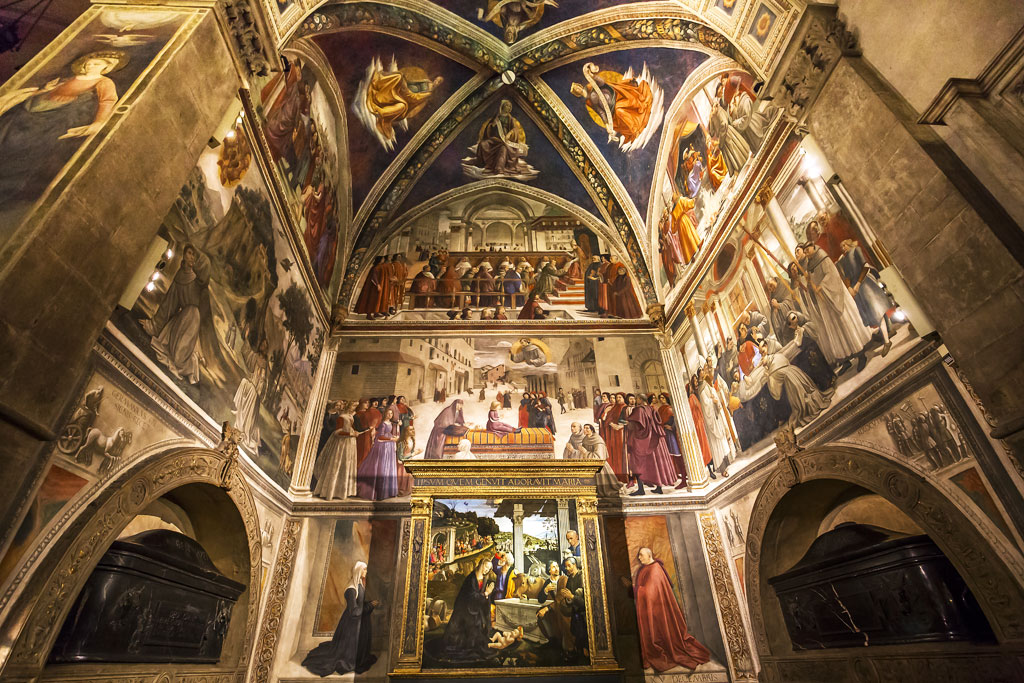 There is an interesting mix of artwork on display here including an “Annunciation” by Lorenzo Monaco and frescoes from the school of Taddeo Gaddi, but the real reason for visiting this unassuming church is for the frescoes by Ghirlandaio.

You cannot miss: The exquisite frescoes from the story of Saint Francis in the Gothic Sassetti Chapel, which were completed by Domenico Ghirlandaio in the 1480s.

Home to the most complete collection of artwork by Fra Angelico: Convent and Basilica di San Marco

San Marco is a Dominican church and convent that was built by the architect Michelozzo and commissioned by Cosimo de’ Medici in the 1430s. The church now forms part of the Museo di San Marco, containing the most complete collection of artworks by Fra Angelico in the world. One of the greatest early Renaissance artists, Fra Angelico was also a Dominican monk who lived in the convent between 1438 and 1445. 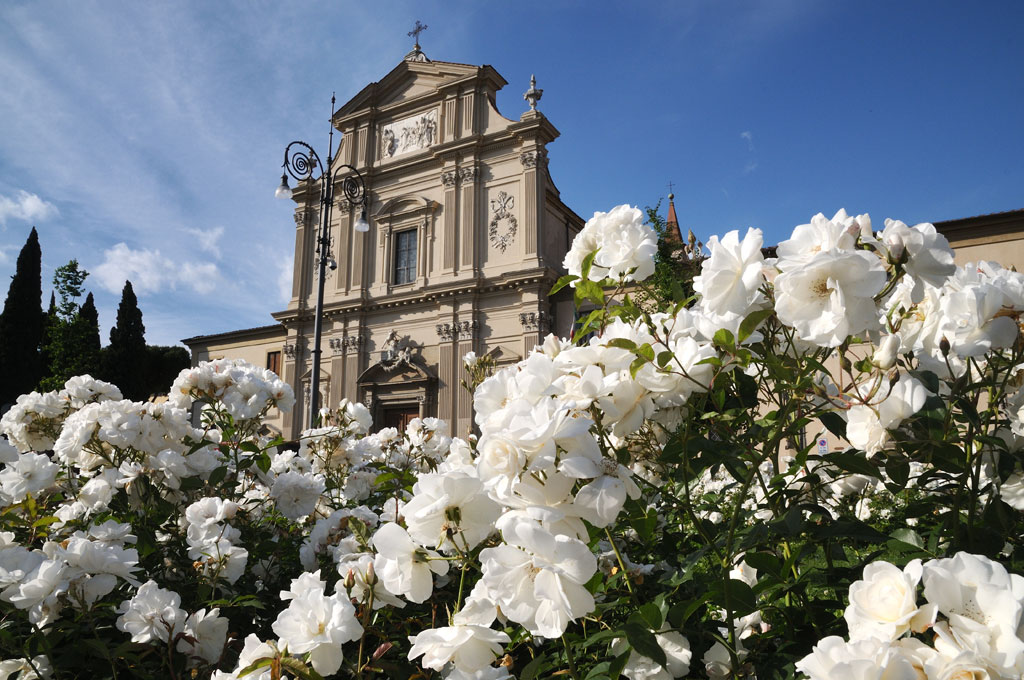 The church's neoclassical facade masks its Renaissance origins, but you will still find original works by Fra Angelico, Fra Bartolomeo and Giambologna inside. The museum is mostly housed in the old convent, including the cloister of Sant’Antonio, Refectory, Chapterhouse and the monk’s dormitories on the second floor.

You cannot miss: all things Fra Angelico — in particular, look out for, the “San Marco Altarpiece”, frescoes of the crucifixion in the chapterhouse and his famous “Annunciation” scene on the second floor of the convent outside the monk’s cells. Other important artworks include Ghirlandaio’s “Last Supper” scene and “The Madonna and Child” by Paolo Uccello.

San Miniato al Monte is situated above Piazzale Roma and offers one of the best views over Florence. If this isn’t enough to tempt you into making the climb to see this church, the green and white inlaid marble facade, gilt mosaics and frescoes by Taddeo Gaddi surely will.

San Lorenzo is another of Brunelleschi’s great masterpieces and is the final resting place of all the significant members of the Medici family. It is home to artworks by Bronzino, Filippo Lippi and Donatello.

The Brancacci Chapel in Santa Maria del Carmine is Florence’s answer to the Sistine Chapel in Rome. The church of Santa Maria is pretty underwhelming unless you are a fan of the Baroque, but the Brancacci chapel is covered from floor to ceiling in vibrant frescoes by Masaccio and Masolino, later completed by Filippo Lippi.