When you see the turrets and fortress spiking the sky above the old road from Siena to Rome, you know you’ve almost arrived at one of Tuscany’s loftiest hill-towns. Montalcino is known around the world for its red wine, the feisty Brunello di Montalcino.

Its walls enclose a tight-fitting town of narrow streets, steep staircases, and a fortress that played a key role in battles during the final years of the Sienese Republic.

Montalcino’s dominant building is its Fortezza, the castle where the Republic of Siena made its last stand. Finally driven from their home city by Florentine and Spanish armies in 1555, independent Sienese families holed up here and resisted until 1559. In recognition of their dedication, the flags of Montalcino still receive pride of place at Siena’s twice-annual Palio horserace.

Visitors can scale the Fortezza’s defensive towers, and walk around the ring of walls. Catch it on a morning when the mists haven’t yet risen from the Val d’Orcia way below, and you will never forget the view.

On the castle’s ground floor is Montalcino’s best enoteca (wine cellar), where you can taste Montalcino wines in every price bracket.

Montalcino also has one of Tuscany’s best small-town museum collections. The Musei di Montalcino occupies the former convent of St. Augustine, and has an eclectic collection that includes Gothic panel paintings, carved wooden Crucifixion scenes dating to the 1300s, and archaeological finds from the Bronze Age and Etruscan period.

Montalcino is one of the world’s great wine towns. No top-end wine list in the world is complete without a Brunello di Montalcino. Made only from Sangiovese grapes grown in the surrounding hills, the wine is dry, powerful, bursting with fruit, yet restrained by acidity and structure.

A good Brunello will set you back €50 or more. For a taste of what Sangiovese can achieve without the hefty price tag, try Rosso di Montalcino. Made from the same grapes, it is aged only briefly in oak, creating a softer, fruitier wine, better when drunk young — as well as much more affordable.

Hearty, rustic Montalcinese cooking is a perfect match for its blockbuster wines. Wild boar (cinghiale) is a menu favourite — cured in strong, pepper-sweet salami; served in umido (a stew); or made into a meaty pasta sauce (ragù) traditionally served with pici or pinci. This is southern Tuscany’s native pasta: short, fat, hand-rolled spaghetti.

Montalcino is also known for its honey, including intensely flavoured varieties from bees reared close to acacia flowers or chestnut (castagne) woods.

Out of Town: An Ancient Abbey

A 6-mile walk, drive, or cycle south of Montalcino is one of rural Tuscany’s architectural treasures. According to legend, Charlemagne founded the abbey of Sant’Antimo in 780, when he was travelling north on the Via Francigena, the old pilgrim road linking Rome with Canterbury, in England.

The church was rebuilt in the French Lombard style in the 12th century; its semicircular apse and chapels are unique in Tuscany. Standing alone in a little vale surrounded by woods and olive groves, it is as serene a church as you will ever see.

Just east of town — and a long way downhill — is the Val d’Orcia, its rolling hills punctuated by stone farmhouses, crumbling castles, and cypress-studded ridges. This is one of Tuscany’s most scenic landscapes, and has been shaped by centuries of interaction between human farmers and the fertile terrain, which began during the Renaissance. (The valley is protected by UNESCO in recognition of this unique cultural history.) 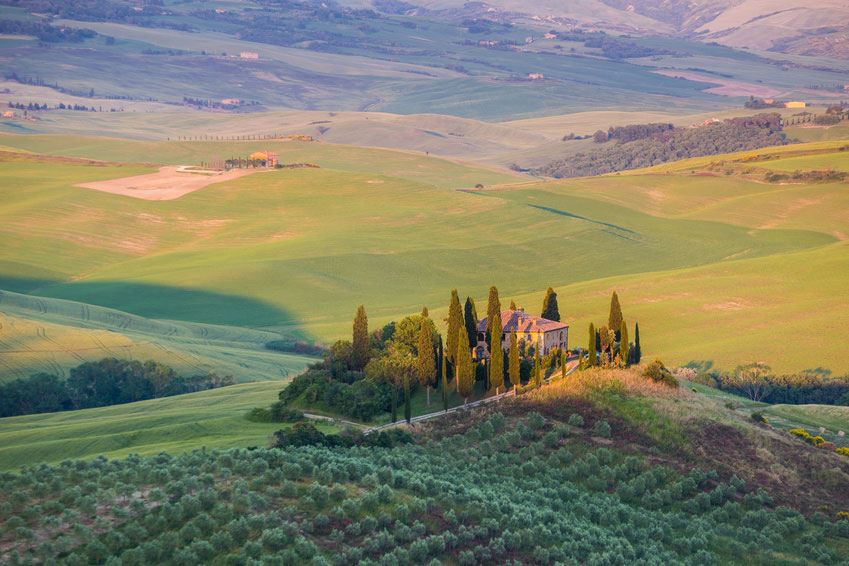 The Val d’Orcia is a photographer’s dream, in almost any season, with vast emerald-green expanses in spring cooked to straw by the summer sun; chestnut groves and trellised vines wearing their autumnal colours; lonely chapels framed by cypress stands dusted in snow during a winter cold snap.

The road between San Quirico d’Orcia and Pienza makes an especially scenic drive, as do the roads from the main SS2 up to Radicofani.

Until recent decades, this was one of Tuscany’s poorest areas; a bleak landscape where peasants eked out a tough living working the crops and fruit groves. The struggle is well described in Iris Origo’s wartime memoir, War in Val d’Orcia. The wine boom and the arrival of tourism (in manageable numbers) has changed all that.

Hunting is a way of life in southern Tuscany. Montalcino’s major annual feast is traditionally dedicated to the thrush, which used to be hunted around here in vast numbers. The Sagra del Tordo is held on the last weekend in October and features a medieval archery contest, as well as plentiful food and local red wine.