Tiny Pienza is such a perfect miniature of Renaissance architecture that its entire centre is recognized by UNESCO, for the “new vision of urban space” it represented in the mid-1400s. Since prehistory, there had been settlements on this ridge overlooking the Val d’Orcia, 37 miles south-east of Siena. But it is Pope Pius II’s madcap (and unfinished) plan to build the Città Ideale (“Ideal City”) that puts Pienza on the tourist trail.

In the early 1300s, Boccaccio wrote of the “ladri” (thieves) of Corsignano. By the 1460s, this same place had a new name, and was instead famous for architects and the elegant buildings they created here.

Until 1462, there was no such place as Pienza. There was something here, of course: the village of Corsignano, birthplace in 1405 of Aeneas Sylvius Piccolomini, who on investiture as Pope Pius II, decided to revamp his modest home village in lavish style and at great expense (50,000 florins, apparently).

This humanist pope had ambition: to take the architectural writings of Alberti and other theorists of the early Renaissance and put them into action, to plan and build the “perfect” town. And then, to name it after himself. Pienza translates as “city of Pius”.

The focal point is Piazza Pio II, named after the pope who was born here and who later commissioned Florentine architect Bernardo Rossellino to convert Corsignano into his new model town.

In truth, Rossellino never got much farther than this main piazza. In the process, he left a Duomo (1462) with handsome, regular blind arcades and niches on the façade (as well as Pius’s own coat of arms). Unusually, artworks Pius II commissioned for the airy, light interior are all still in place — four hybrid Gothic–Renaissance altarpieces by leading Sienese painters, including Vecchietta and Matteo di Giovanni. 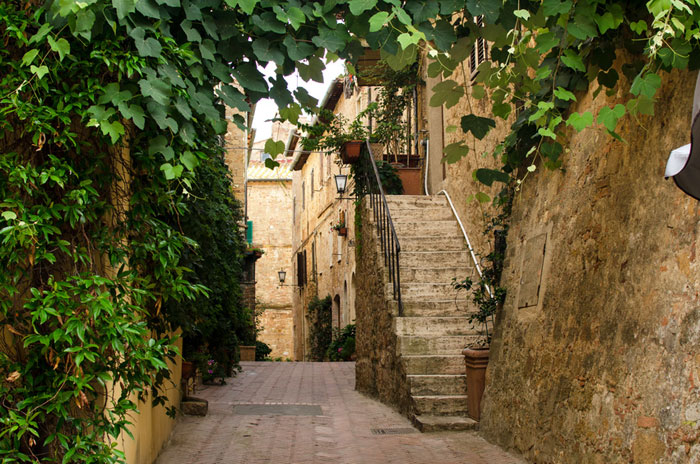 Pius insisted upon the cathedral’s precise location. Unfortunately, he chose the edge of a precipice. As a result (and despite hefty underpinning) the building is slowly cracking up. You can see and feel the slope as you walk from the door to the apse.

The adjacent Palazzo Piccolomini is Rossellino’s masterpiece, a perfectly proportioned palace whose design is heavily influenced by Florence’s Palazzo Rucellai. Its hanging gardens look down the length of the Val d’Orcia. You can see the interior and gardens on a guided tour.

There’s another photogenic Val d’Orcia panorama from the ramparts of Pienza’s walls. Outdoor tables at the little café on the corner of Via dell’Amore (“Love Lane”) have some of the best views in Tuscany. It’s hard to believe this vast, undulating valley was formed (over millennia) by the dribbling River Orcia.

Pope Pius insisted upon the cathedral’s precise location. Unfortunately, he chose the edge of a precipice

Pienza has an artisan rep, mainly for its for cheese: pecorino di Pienza, a hard sheep’s milk cheese. Delis along Corso Rossellino sell it in various stages of maturity: fresco (fresh, young), semi-stagionato (partly aged), and stagionato (aged). It’s the perfect picnic cheese, and a wedge tastes divine in a roll with salami or with a sliced pear and/or a slather of local honey.

Enoteca di Ghino has the best selection of local wines for miles around. There is usually informal tasting available at the counter.

Just downhill from the town — and easily walkable — is a glimpse of Pienza before its 15th-century rebranding. The Pieve di Corsignano is an ancient (10th- or 11th-century) stone church built in the Romanesque style, with rounded arches and carved Biblical and decorative reliefs.

Deeper in the Val d’Orcia, La Foce was the home of Anglo-Italian writer, Iris Origo. War in Val d’Orcia is Origo’s memoir, written as the Germans retreated (destructively) through this part of Italy, in 1943–44. Child refugees and POWs were offered safe haven, often clandestinely and at significant risk to those who lived and worked at La Foce.

La Foce is also famed for its formal English/Italianate garden, designed and built by Cecil Pinsent in the 1920s and 1930s, with box hedges, wild herbs and snatched views of the Val d’Orcia. The garden is usually open to visitors on Wednesday afternoons, weekends and national holidays.

Four miles north of Pienza is the remote Olivetan monastery of Sant’Anna in Camprena. The inside is mostly private, but this is a wonderfully peaceful spot to drive to and roam around. Much of Oscar-winner “The English Patient” was filmed here.

San Quirico d’Orcia, 6 miles west of Pienza, is a small, tranquil town where it’s easy to fritter away a few hours in idle roaming around its (mercifully flat) streets. It grew as a rest stop on the Via Francigena pilgrims’ route to Rome. Photogenic highlights include its honey-coloured Romanesque collegiate church, part of which dates to the 11th century; and geometric 16th-century gardens known as the Horti Leonini.