Enclosed in a ring of Renaissance walls and surrounded by arable farmland, Città di Castello is the major stop on northern Umbria’s borderlands with Tuscany. It lies around 23 miles east of Arezzo.

A steady stream of renowned architects completed commissions in Città over the centuries. Angelo da Orvieto created the Town Hall in the 1300s. Vignola’s Palazzo Bufalini is a 16th-century jewel.

Yet despite these streets lined with grand palaces, Città di Castello still has a genuine, lived-in charm. It is no museum piece, but a bustling town. Hit the street cafes of Piazza Gabriotti on a summer’s evening and you’ll see.

Città di Castello was also the hometown of Alberto Burri, an abstract artist whose themes, interests and materials in many ways foreshadowed Pop Art. Two major Burri collections are the town’s major — but not only — must-sees for art lovers.

Città di Castello has had many names over the centuries, since its founding in near-prehistory by the Umbri. The Romans renamed it Tifernum Tiberinum, but the Lombards win the naming prize. After occupying the area, they renamed it Castrum Felicitatis — “a happy camp”. Locals are, literally, Happy Campers.

Throughout the medieval period the town oscillated between Free Guelph Commune status and outside rule by Perugia, Florence and the Catholic Church. Local power struggles were frequent until the Papal States swallowed it and the town slowly stagnated.

Città was liberated by Piedmontese troops in 1860, during the Unification of Italy.

What to See in Città di Castello

You cannot miss the Cathedral, whose flank is conjoined with the Town Hall along one side of Piazza Gabriotti. It’s an astonishing jumble of architectural styles, with a brick-meets-baroque facade — testament to Città’s stop–start development over the centuries.

The cathedral’s cylindrical Bell Tower stands 43m/143 ft. in a tiny little square. It has been a popular roost for local birdlife since the 11th century. Its rounded walls are typical of Byzantine-era Ravenna, from where the tower’s unknown architect probably got his influences or training.

Raphael’s “Wedding of the Virgin” was painted in 1504 for a small chapel in the Church of San Francesco. A copy hangs there now since a general in Napoleon’s invading army extorted the original and sold it for a handsome fee. It’s now in Milan.

Fast-forward a few centuries and the biggest name in local art is Alberto Burri (1915–95). A vast and diverse collection of his work is displayed in two contrasting locations, the Renaissance Palazzo Albizzini and the Ex Seccatoi, a tobacco-drying warehouse complex built in the 1950s.

The former has 20 rooms displaying abstract works on whitewashed walls accented with grey pietra serena stone — classic Florentine style. Burri created the works here between 1948 and 1989. Signs everywhere remind you not to touch the art. His unconventional work has a tactile quality… you really will want to touch it!

At the Ex-Seccatoi, the emphasis is on Burri’s later, monumental works. Burri was first given permission to use the warehouses in the late 1970s; in 1979, he exhibited his first large-scale cycle there, “Il Viaggio”.

Between them, these two sites tell the near-complete story of Burri’s artistic development.

Among many Gothic and Renaissance palaces which line Città’s streets, the most prominent is the Palazzo del Podestà. Designed in the 14th century by Angelo da Orvieto, the palace was HQ for the “Podestà”, the local ruler. You can still make out various coats of arms on the facade. 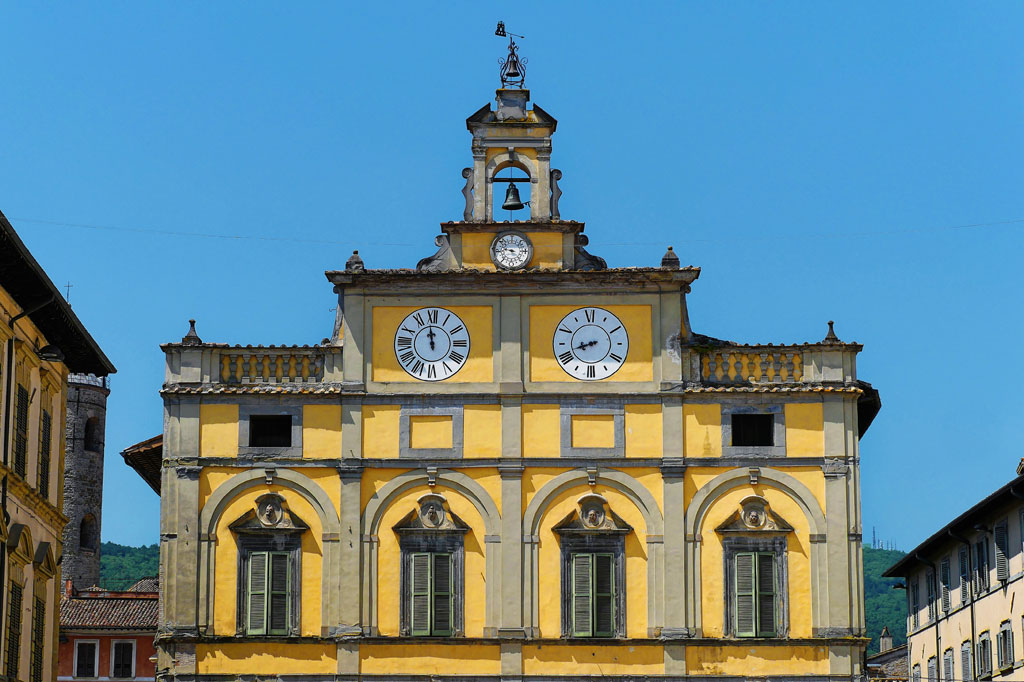 The same architect created the Town Hall, whose vast vaulted ground floor entrance and monumental staircase you are free to explore (it’s right on Piazza Gabriotti, opposite the stone Torre Civica).

For centuries, Città di Castello has been a major centre for all kinds of printing — a tradition which continues even into the digital age. Printers are documented in the town by 1518, and were probably here from the late 1400s. From the 1700s printing really took off in Città di Castello and became a major employer.

For a few euros you can tour the workshops of Tipografia Grifani Donati, a print and lithography firm founded in 1799. Their business continues largely on original hand-operated machinery, which you will see up-and-running. They still use printing and lithography presses from the 1800s and a 1960 copperplate printing press for chalcography.

A fascinating guided visit and demonstrations (in Italian), for which you need to book ahead, cost a little more, but you leave with a couple of prints made just for you.

It’s fitting that one of the major local festivals is dedicated to books. Each September, the Mostra Mercato del Libro Antico draws specialist antique booksellers to Città to exhibit and sell rare books.

Under the artistic direction of Terry Gilliam, the Umbria Film Festival takes over Piazza Fortebraccio in Montone (see below) each July with a projector and outdoor big screen. Preview showings span Italian, European and global cinema.

One of Umbria’s prettiest walled villages, Montone (12 miles south of Città di Castello) owes its fame to a 14th-century warlord. Though rooted in the 9th century, Montone took on its fortified, stone appearance in the medieval period.

Braccio da Montone was a soldier of fortune and military commander — a “condottiere” — who fought for almost every side during the Italian Wars of the 1300s and early 1400s. Andrea Fortebracci, to give him his real name, fought for the Florentines against the Pope; for the Milanese in Naples; for a Neapolitan king fighting both Florence and the Pope; for the Pope against Bologna; and for both sides in a long-running squabble between the Pope and Milan. He was betrayed and killed at the siege of L’Aquila in 1424.

At the highest point of the old town, towering above Umbertide and the Upper Tiber Valley to the south, are the ruins of Fortebracci’s castle, the Rocca di Montone.

The castle was destroyed on the orders of Pope Sixtus IV. Its ruins now shade a garden of remembrance for the dead of Italy’s 20th-century wars. Even on the warmest days you’ll find a light breeze scattering the aroma of larch trees.

The town’s main church nearby, the Collegiata, was briefly a cathedral. Very briefly: from 1306 to 1308.

The small-town art museum is housed around a 14th-century Franciscan convent cloister. It includes works by Perugian painter Bartolomeo Caporali, one featuring Montone’s castle before Sixtus got hold of it.

Note: Montone’s art sites usually open Friday through Sunday only. But don’t worry if you’ve stopped by on a wrong day. It gives you an excuse to come back for a cappuccino and a freshly baked pastry in the little cafe in Piazza Fortebraccio, facing the 14th-century clock tower.