Perhaps you’ve heard of the Scuola Grande di San Rocco — it’s probably up there on most people’s lists of the best things to do in Venice beyond Saint Mark’s Square. It’s also one of 7 scuole grandi in Venice, each a monumental feat of art and architecture, each an important relic from the Venetian Republic’s hey-day. But what exactly are the scuole of Venice and what makes them so unique to the city?

A brief history: what are the Scuole Grandi di Venezia?

The scuole grandi (“great schools”) were religious confraternities, first founded by the laymen of Venice in the 13th-century as offshoots of a flagellant religious movement. They were essentially charitable institutions providing something of a welfare system for poorer class members, widows and orphans. This included the provision of money, food, social housing, clothing. They even paid for the funerals of members who otherwise could not afford it.

All classes could join a scuola (“school”), including women, however, members of the hereditary patriciate, like clergy, were only granted partial membership and forbidden from taking part in any internal administration. They were social institutions designed for ordinary people — at least to begin with.

They were financed by donations and subscriptions from memberships, as well as generous gifts and bequests from nobility seeking salvation in the afterlife. This in turn funded their ambitious — often ostentatious — building projects, and the commissioning of leading Venetian artists to decorate their walls.

The first scuole grandi in Venice; the Scuola di Maria della Carità, San Marco and San Giovanni Evangelista were founded between 1260 and 61. The Scuola di Misericordia was founded in 1308, followed by San Rocco in 1478. San Teodoro was granted the status of scuola grande in the 16th-century, while the Scuola dei Carmini was the last of its kind to be recognised in 1767.

What is the difference between the Scuole Grandi and Scuole Piccoli?

You may also have heard of the scuole piccoli (“small schools”) of Venice — the Scuola degli Schiavoni is a pretty special example, decorated from floor to ceiling with narrative paintings by Vittore Carpaccio and well worth a visit.

However, the scuole piccoli didn’t always share the wealth and prestige of the scuole grandi, which were individually recognised by the Council of Ten and each affiliated with one of the main churches in Venice. The scuole piccoli were much smaller confraternities that had varying functions; some had primarily religious motivations, others acted as centres for colonies of foreign residents like Turkish or Slav merchants, the remainder acted as craft and trade guilds. Famous yet humble artists like Giovanni Bellini and Tintoretto belonged to a scuola piccolo.

What makes the Scuole Grandi of Venice so unique?

While devotional confraternities were common throughout medieval Italy, the scuole of Venice were also important civic institutions placed under the secular control of the Venetian government. Even the name ‘scuola’ was one uniquely given in Venice, something you will only experience in the city and ex-Venetian territories like Padua.

Alongside their civic and religious purpose, the scuole grandi took on increasingly political roles, acting as a self-government for the citizen class (“cittadini”) who were otherwise excluded from high government positions reserved for the noble patriciate. It became an effective and clever way for the Venetian government to encourage social cohesion over potential discord.

Building works on the scuole grandi coincided with the climax of the political and economic power of the Venetian Republic. Venice was rapidly expanding in industry and trade, prosperity and political security. The significance of the scuole in Venice was born out of this moment, and naturally, they thrived. Eventually, the scuole superseded their charitable origins, investing masses of money into what were effectively vanity projects — works of art, processional banners — competing with one another for prestige, pomp and grandeur.

Our top picks: The Scuole Grandi you cannot miss if you are staying in one of our luxury villas in Venice or Verona

The Scuola di San Rocco — dedicated to the patron saint of plague amidst a tragic epidemic that killed 300,000 — was always destined to become one of the most prestigious institutions in Venice. It is still one of the most famous scuole in the city and when you step inside it isn’t hard to see why. The floors are sumptuously inlaid with marbles and the gilded walls and ceilings are covered with more than 60 paintings by Tintoretto. It is easily one of the most beautiful buildings in Venice.

Tintoretto famously won the commission by undercutting other leading artists of the day, like Veronese, by donating all the ceiling paintings in the Sala dell’Albergo for free. Over the next 20 years, (1564-1588), Tintoretto created his dramatic narrative paintings from the Old and New Testaments. There are other masterpieces by the likes of Giorgione, Tiepolo and Titian at the Scuola di San Rocco, but it really is synonymous with Tintoretto.

The Scuola di San Marco is one of the oldest in Venice. It was first founded in 1260, but in 1437 was moved to Campo Santi Giovanni e Paolo in Castello, one of the prettiest squares in the city. Its dedication to the patron saint of Venice guaranteed the scuola immediate wealth and prestige. The building’s facade — with its marble lunettes and winged-lion bas-reliefs — was built with the Basilica di San Marco in mind. 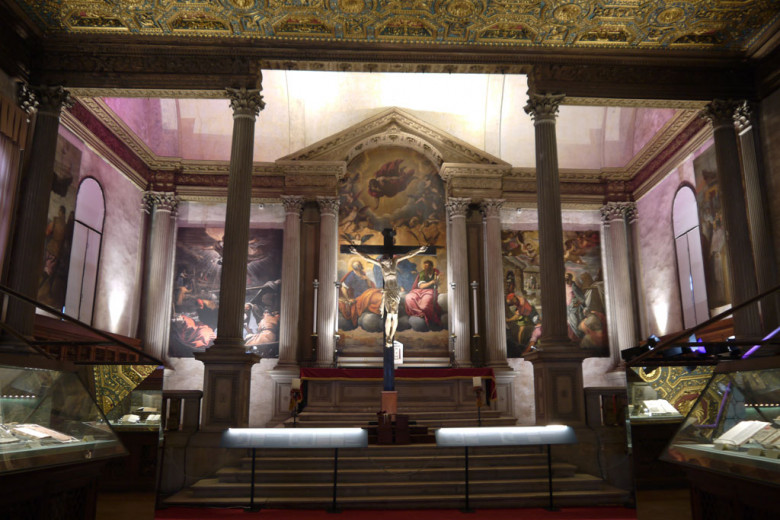 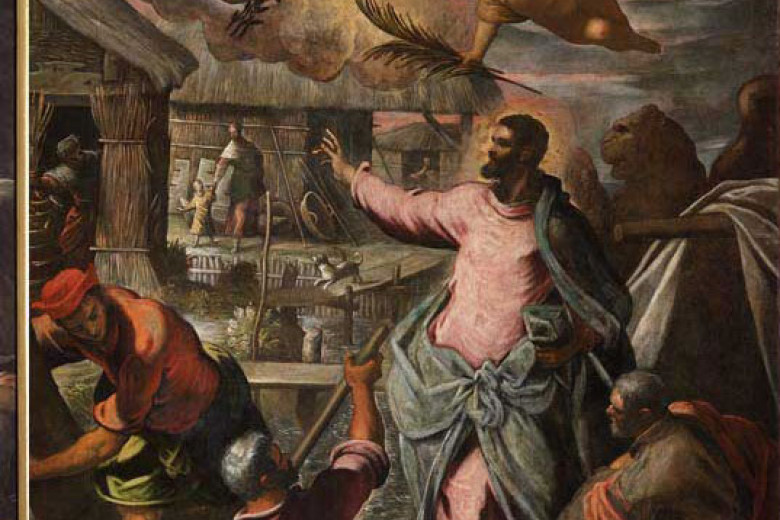 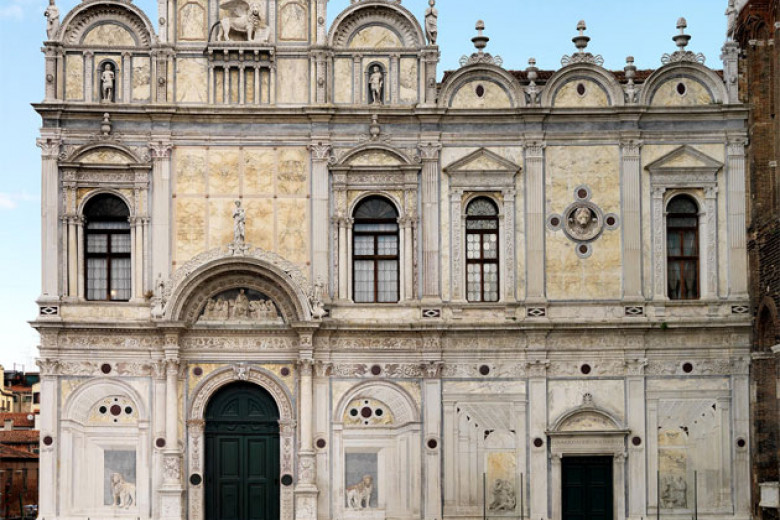 In the 1800s the scuola was converted into a civic hospital and remains so to this day, but you can still visit the main chapter room and Sala dell’Albergo, with its carved blue and gilt ceiling and narrative paintings by Domenico Tintoretto and Palma il Giovane.

Many of the other original paintings from the scuola by Paris Bordone, Mansueti, Giovanne and Gentile Bellini, and Tintoretto can now be found in the Accademia, which is partially housed in the original Scuola Grande di Maria della Carità.

San Giovanni Evangelista is probably the most visually interesting of the scuole architecturally because of its blend of Gothic, Renaissance and Medieval styles. It is still built around a medieval campiello (“small square”), which can be accessed by a breathtaking marble septum (“screen”) completed by Pietro Lombardo in the 15th-century. 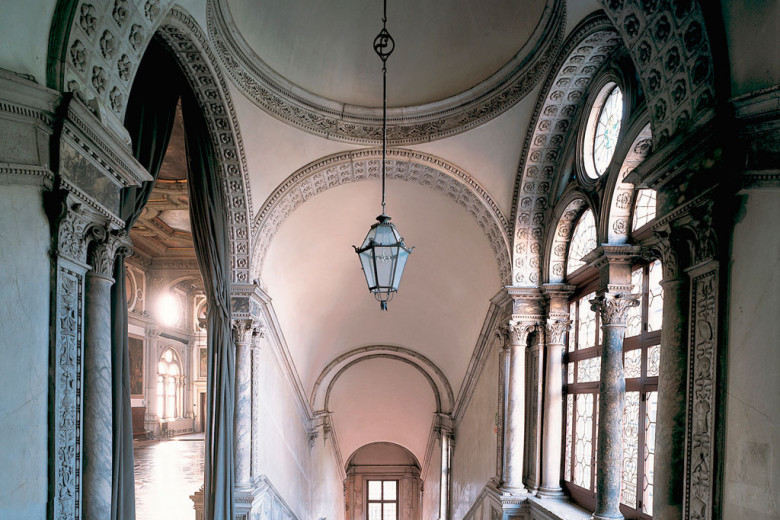 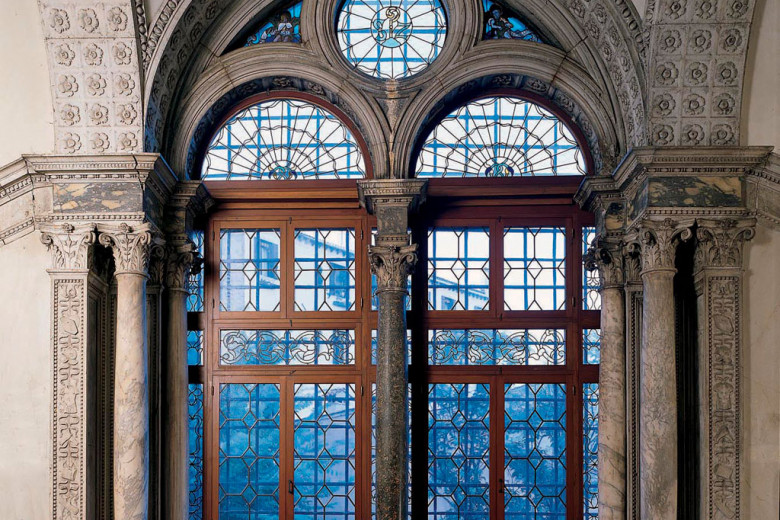 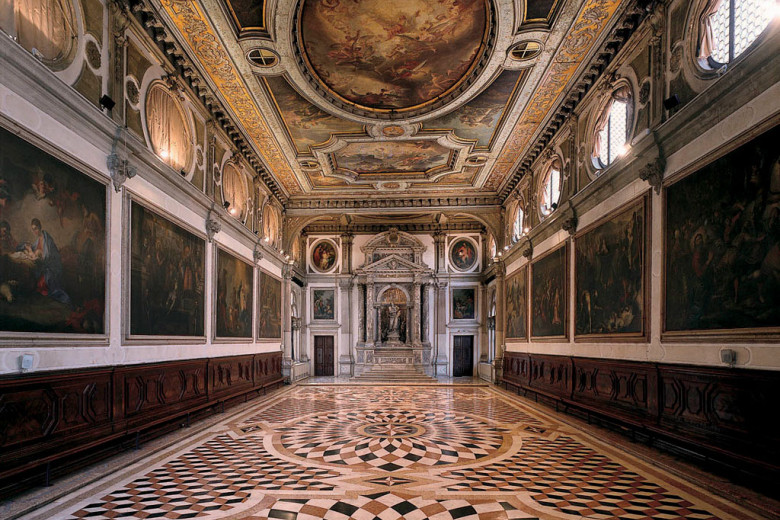 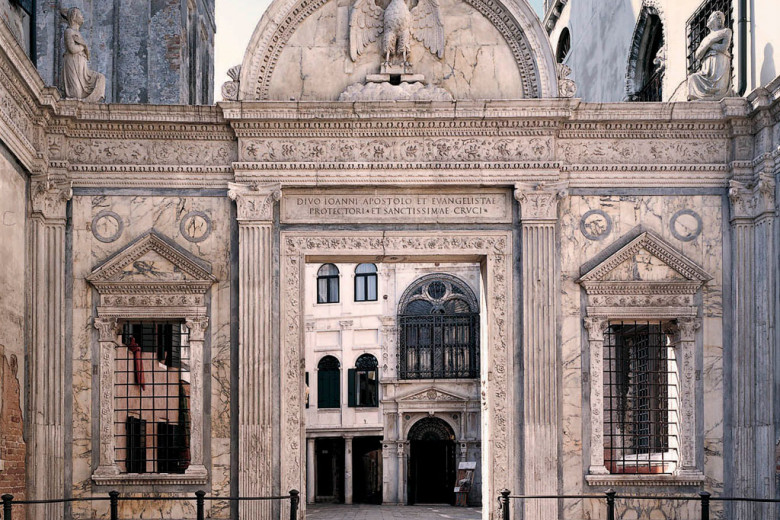 The scuola is home to a relic of the one true cross and renovations to the chapter house continued as late as the 18th-century. With paintings by Tiepolo and elegant stuccoes, the interior of San Giovanni Evangelista is typical of Venetian Rococo style. You can still see paintings by Palma il Giovane here, but many of the original narrative cycles by Bellini, Mansueti and Carpaccio are now housed in the Accademia.