Venice is one of those rare cities where many famous altarpieces and Renaissance paintings can still be appreciated in situ. The city’s many churches — from the iconic and ceremonial to the entirely unassuming and underrated —  are the keepers of great, sacred and sometimes secret masterpieces.

We couldn’t possibly summarise all of the fascinating churches worth visiting in the city because there are just so many, but if you are staying in one of our luxury villas near Venice or Verona, we’ve rounded up just a few of our favourite recommendations. Spoiler alert though — this article doesn’t mention the Basilica di San Marco. We think it’s about time the iconic landmark —  however worthy of its fame it may be — shares at least a little of the limelight.

One of the largest churches in Venice: Santa Maria Gloriosa dei Frari, Dorsoduro

Quite possibly our favourite church in Venice, the grandiose Basilica dei Frari is barely contained by the campo in which it sits. The foundation stone may have been laid in 1250, but the church took over a century to build. It is typical of the gothic style, with a brick and Istrian stone facade, rose windows and delicate pinnacles. Situated in the artsy Dorsoduro district, it is just a stone’s throw from the Campo Santa Margherita. 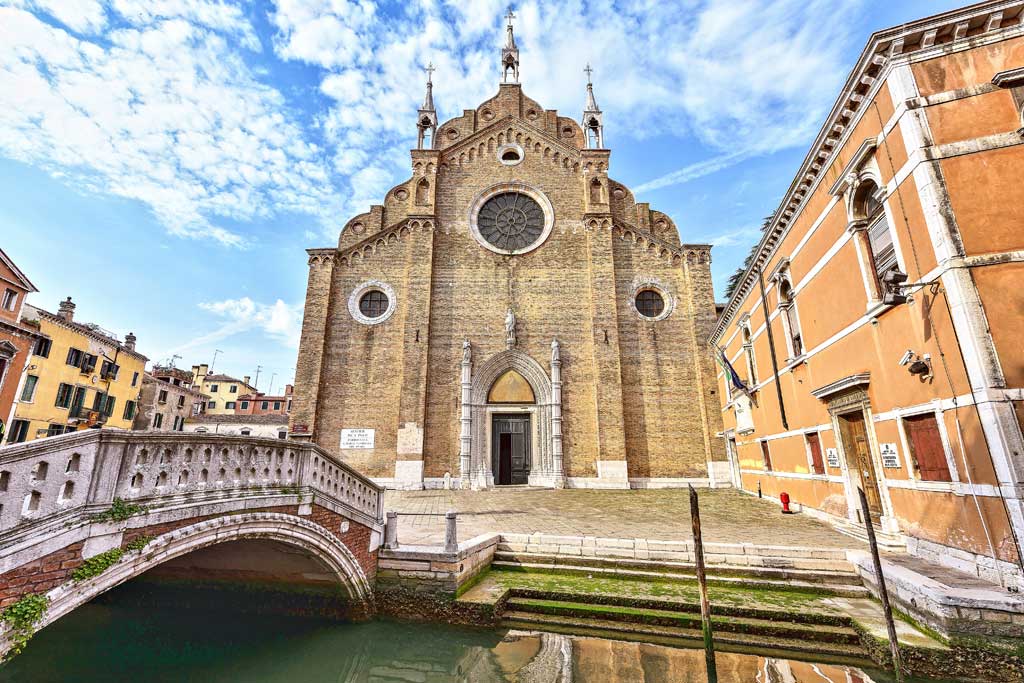 Despite its impressive scale, the exterior of the church will hardly prepare you for the treasures you’ll find inside. Titian’s “Assunta” (“Assumption of the Virgin”) sits above the high altar, a stunning depiction of the Madonna, swathed in golden light and surrounded by angels. The famous artist started work on this painting in 1516, at the beginning of his career, and it is one of his most celebrated works of art.

Titian’s tomb can also be found in the Frari alongside his “Pesaro Altarpiece”  — the imposing, Carrara marble monument features intricate bas-reliefs of several important religious paintings by the artist.

A funerary monument dedicated to Antonio Canova sits opposite Titian’s tomb; it was originally commissioned for the Renaissance artist himself, but now contains Canova’s heart, which he wished to remain eternally in Venice.

One of the Oldest Churches in Venice: Santa Maria Assunta, Torcello

It is often said that San Giacomo di Rialto is the oldest church in Venice and if its consecration date of 421AD is to be believed, it would make it as ancient as the city itself. However, the Venetian Republic had a habit of inventing elaborate and idealised origin myths about Venice. It would be nice to believe that the heart of trade and commerce had always been Rialto, but in actuality, the city’s origins can be traced back to the island of Torcello. The story of unnavigable marshes and malaria epidemics just doesn’t sound as glamorous as a marble loggia on the Grand Canal though does it? 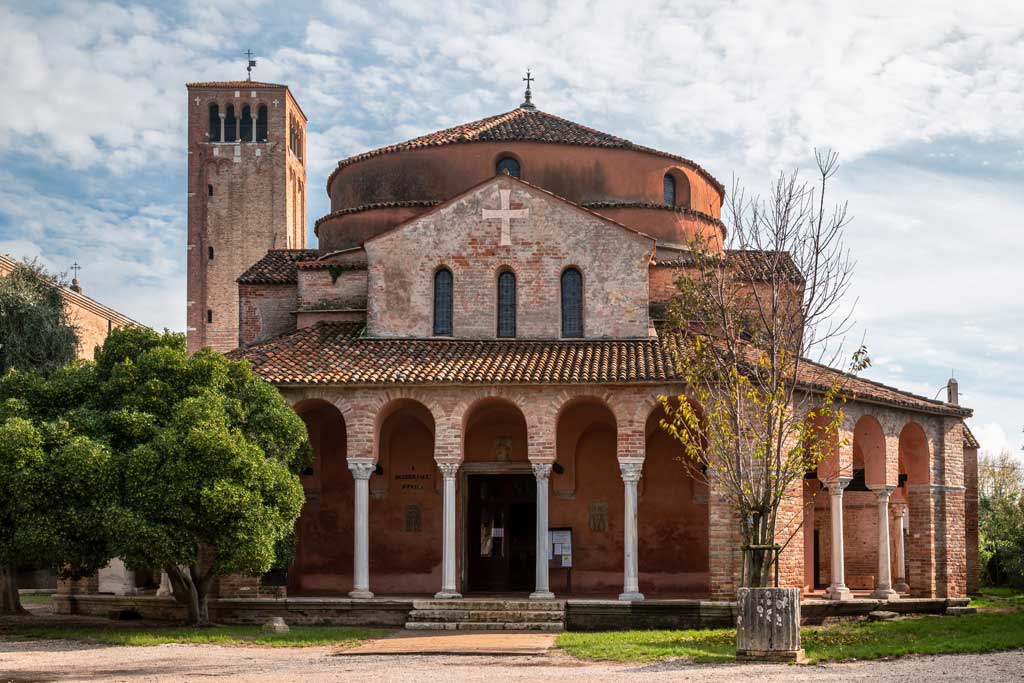 Torcello these days is a quiet nature reserve, but the Byzantine Basilica di Santa Maria Assunta is very much still standing. The church is filled with glittering, gilt, glass mosaics that predate those in the Basilica di San Marco. An 11th-century mosaic of the Virgin and twelve apostles can be found in the main apse, alongside depictions of “Christ in Majesty” and an utterly fascinating “Last Judgement” scene combined with the “Harrowing of Hell”.

On the church floor is a Byzantine marble mosaic, which dates back to the 6th-century and an eclectic mix of Ancient Greek marble columns line the central apse, all with slightly different capitals. In early Venice, spoils from the ancient world were never wasted!

You can also glimpse early fresco paintings in Santa Maria Assunta that date back to the 9th-century; a truly rare treat in Venice. Few frescoes have survived in the city because of the humidity, which is why when you visit most churches and palaces in Venice the paintings are all created on canvas. If you pay a visit to the Basilica in Piazza San Marco, we urge you to make the journey to Torcello as well.

Remember when we mentioned the many unassuming churches in Venice? Well, San Pietro Martire on Murano is a prime example of this. The current brick facade of this Renaissance church is not as visually exciting as others on the island — like the Byzantine, Basilica di Santa Maria e San Donato — however, it houses several treasures within. 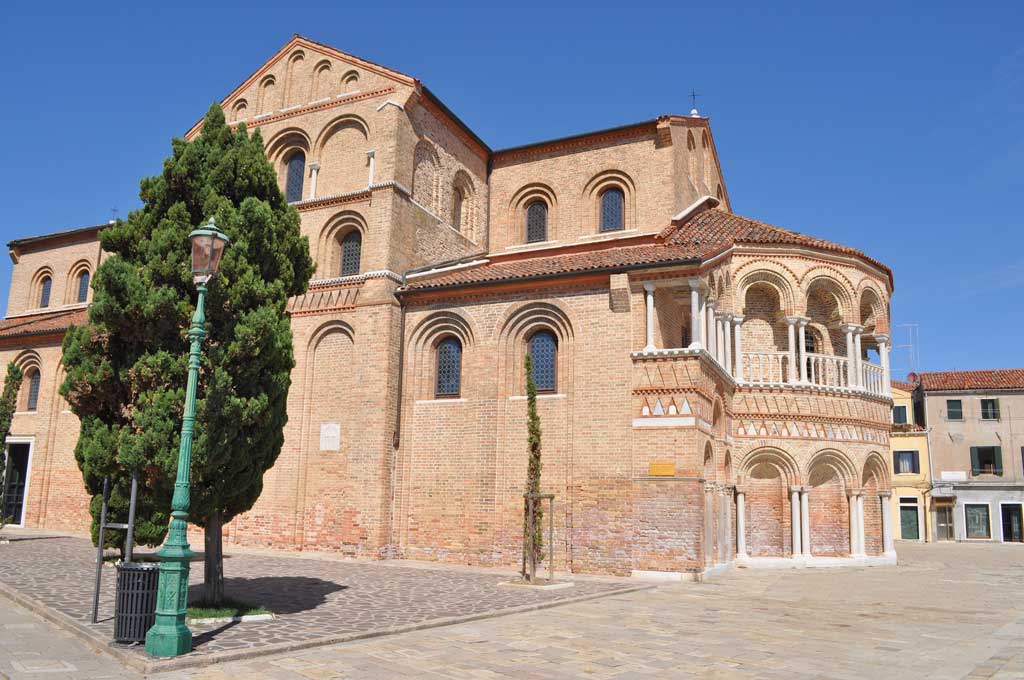 The church is home to Giovanni Bellini’s Barbarigo Altarpiece (1488), taken from the church of Santa Maria degli Angeli, a 12th-century convent on Murano. The painting depicts the Doge being presented to Mary and Jesus by Saint Mark with the divine, blue Dolomites in the background. You will also find one of several dramatic depictions of “The Baptism of Christ” by Tintoretto and “St. Jerome in the Desert” by Paolo Veronese at San Pietro Martire.

This Franciscan church in Cannaregio could be considered the sister basilica to the Frari. Santi Giovanni e Paolo, or as they say in Venice, San Zanipolo, is another Gothic brick basilica with Istrian stone adornments and rose windows. Work began in the 13th-century, but the immense church as we witness it today was not completed until the mid-15th-century. It is now the final resting place of 27 doges and belongs to one of the prettiest campi (“city squares”) in Venice.  The breathtaking, marble Scuola Grande di San Marco sits adjacent to the church before an open square, which is one of the few remaining local hangouts in the city. 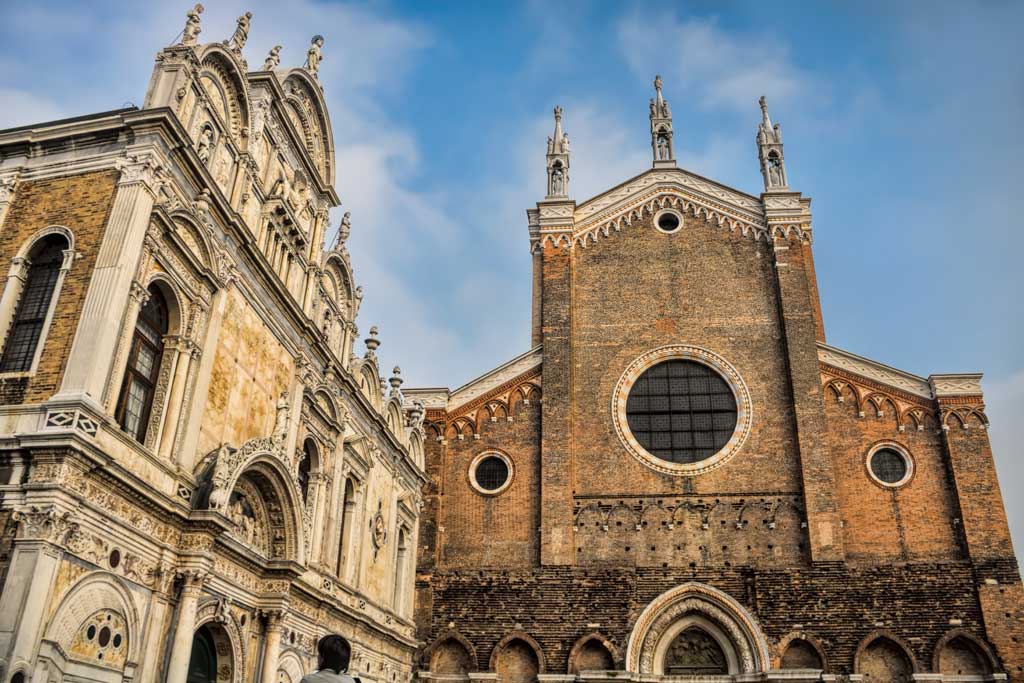 The tombs of the doges of Venice are fascinating and visually very striking, completed by leading architects in Venice at the time like Pietro Lombardo, however it is best to visit on a sunny day if you want to appreciate the art. Possibly one of the downsides of having so many incredible masterpieces still in the original churches in Venice is the issue of visibility. You will find artworks by Bellini, Cima da Conegliano, Palma il Giovane, Vivarini and Veronese inside the basilica, which are well worth seeing, but you’ll need the sun on your side to appreciate their finer details.

Il Redentore and San Giorgio Maggiore are amongst the best-known churches in Venice. Alongside Santa Maria della Salute on the Grand Canal and the Basilica di San Marco itself, these two Palladian Churches are stars of the Venetian skyline. They have been venerated and painted by artists like Canaletto and Monet; we marvel at them from afar, take photos of them when we are in Venice, but few of us take the time to venture inside. 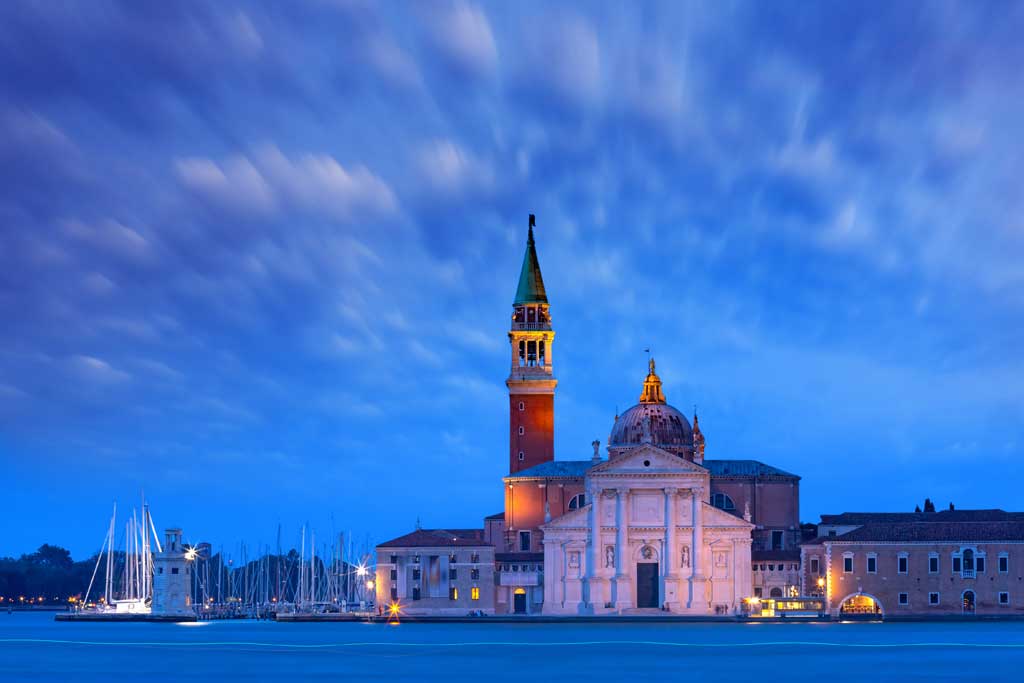 It is well worth it.

The gleaming, light-filled, marble interior of San Giorgio Maggiore is just as monumental as the facade. Andrea Palladio, the famous Italian architect, started work on the church in 1565 up until his death when it was completed by Vincenzo Scamozzi. There are multiple paintings by Tintoretto inside, including a “Last Supper” scene, as well as works by Jacopo Bassano and Sebastiano Ricci.

Il Redentore (“The Redeemer”) was built by Palladio on the Giudecca following a horrific plague epidemic that killed nearly a third of the Venetian population. If you don’t mind the crowds, the Festa della Redentore each July is one of the best ways to see the church. A temporary bridge is built across the Grand Canal and firework displays light up the sky at night. Inside, you’ll find several paintings by Tintoretto, Paolo Veronese and Francesco Bassano.

Madonna dell’Orto is a pretty 15th-century church in Cannaregio. It houses a substantial number of paintings by Tintoretto, as well as the artist's tomb.

San Sebastiano in Dorsoduro is lavishly decorated, with a coffered gilt ceiling and replete with paintings by Paolo Veronese — fans of the artist cannot miss this church!

San Zaccaria is just a stone's throw from Saint Mark’s Square and is home to a notable Sacra Conversazione altarpiece by Giovanni Bellini.

Santa Maria dei Miracoli in Cannaregio is a treasure of a church and one of the finest examples of Renaissance architecture in Venice  — the exterior and interior are both clad in an assortment of marble, porphyry and serpentine.