Found along Italy’s West coast, Suvereto is a sleepy Tuscan commune overlooking the magnificent Tyrrhenian Sea. This village is an hour’s drive from both Pisa and Florence, meaning Suvereto’s tucked-away tranquillity is accessible to those in the main cities of Tuscany. This medieval village prides itself on its crenellated structures and ancient history.

Suvereto is renowned for its well-preserved architecture, which creates a timeless atmosphere through its labyrinth of covered passageways. This Etruscan village is perfect for anyone staying in our villas near Pisa and Lucca searching for Tuscany’s finest secrets in wines, food, and culture.

The first signs of Suvereto go back to the Spring of 973. The village was founded on the sloping hills by the coast, with its etymology born out of the Quercus Suber, the surrounding cork forests. During the 11th-century, an array of wooden huts emerged on the hills to become the commune of Suvereto. At this time, Suvereto was a northern stronghold under the control of the nobly feudal Aldobrandeschi family.

As the residential village of Suvereto was brought to life, the Aldobrandeschi family fabricated a quadrangular tower to enact their supremacy over the area. The tall fortification overlooked Suvereto’s rising town, with its buildings set in concentric circles leading up to the tower. The 13th-century saw the tower lowered and partially rebuilt to form a scarp, a tactic to lower the chances of attackers entering.

An inscription found in Suvereto stated that, in the year 1308, work began on a new building beside the tower, large and trapezoidal. A gate was accompanied by a Romanesque arch to provide a grand entrance to the collection of structures, which came to be known as the Rocca Aldobrandesca. The militant history of Suvereto cemented its presence as a formidable agent in medieval Tuscany, but with the military decline, the Rocca was untouched come the 17th-century. The establishment became a civil house during the 19th-century, only to face partial ruin by the 1950s, requiring restoration when brought by the Municipality in more recent years. 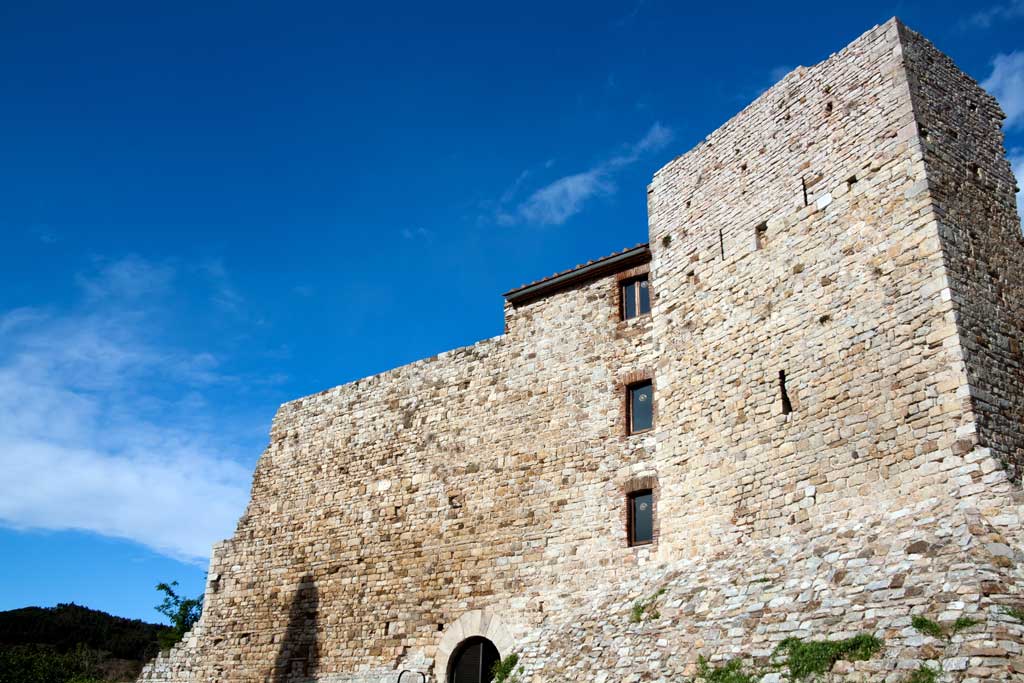 Rocca Aldobrandesca is open to the public 24 hours, 7 days a week. Following a steep yet accessible winding walk up the village, the Rocca provides panoramic views of surrounding olive groves and lush fields. Visit this restored fortress to uncover the secrets behind its inception and the role it played in Tuscany’s militant history.

An intriguing establishment in Suvereto is the Museo Artistico Della Bambola (“Artistic Museum of the Doll”). Found in one of Suvereto’s alleys, this museum is the host of dolls and designer toys from all notable periods in history. This attraction adds to the unique qualities Suvereto has to offer; exploring a regularly forgotten art of toy-making. The exhibits display hand-painted art made from paper-mâché to porcelain, giving an insight into children’s lives and how they’ve evolved. This visit will fascinate children and adults alike, making it a top attraction when in Suvereto.

The local cuisine in Suvereto is dedicated to Tuscany’s culinary traditions with a keen influence from the nearby sea. Suvereto’s frittura di pesce (“fish fry”) is an essential dish to try; fried fish from the local coast is served with vegetables and a Tuscan classic known as Zonzelle. This side dish is derived from Tuscany’s ancient peasant food and consists of small bread dough portions fried in seed oil and accompanied by Rigatino Toscano (“pancetta”).

With an abundance of wineries engulfing the village, it comes as no surprise that the naturalistic core of Suvereto lies in its vineyards. The Petra vineyard is found near the eastern outskirts of the village and is one of the best examples of energy-efficient vineyards in the region. Petra is nestled between the Metalliferous Hills and Tyrrhenian Sea, showcasing a greenland enriched in vines made for the best Tuscan wines.

Suvereto carries its down-to-earth roots into its retail experience with Biondi Gianna, a herb shop based in Piazza XI Febbraio. This store sells itself with essential oils for skincare and wellbeing along with floral and herbal ingredients for fragrant cooking.

Suvereto is passionate about Tuscany’s cuisine and the best way to experience its local enthusiasm is at the Sapori Tra Le Mura Festival (“Flavours Within the Walls Festival”). This 3-day event acts as a cuisine crawl around the town, advocating the best in local food and drink at Suvereto’s favourite restaurants.

Keep reading
Tuscan Cuisine & Food Tuscan Seafood Dishes The Spirit of Tuscan Wine Why is Tuscan wine so special? Top Walking Trails along the Tuscany Coast
Browse all our villas near Tuscany
Like
Share
Follow
Previous article
Next article