Vicenza lies Northwest of Padua and Venice in the valley between the Monti Lessini and Monti Berici. The unique city of Palladio is home to 23 important monuments designed by the famous Renaissance architect. However, beyond its classically proportioned palaces, grand piazzas and elegant loggias is a vibrant and contemporary city.

Vicenza is one of Italy’s largest industrial centres for textiles and steel, the country’s capital for gold and jewellery production, and the established workshop for leading luxury brands like Gucci, Hermès and Tiffany & Co.

Like many towns and cities in Veneto, Vicenza has ancient origins. It was christened Vicetia in the 1st-century BC by the Romans and became an important strategic settlement.

In 1164 Vicenza formed part of the Veronese League, joining together with Verona, Venice and Padua against the Holy Roman Emperor, Frederick I Barbarossa. The city’s history is tightly bound to that of its once-powerful and renowned neighbours. From 1311 Vicenza was presided over by the prosperous Veronese La Scala (“Scaliger”) family before passing to the Visconti of Milan in 1387. It was in the 14th-century, with the birth of the city’s Guild of Goldsmiths, that Vicenza became an important centre for jewellery, remaining so to this day. Along with other major settlements across the Terraferma (the mainland territories of the Venetian Republic), the city fell under the rule of Venice in 1404.

At the heart of Vicenza’s historic centre is the Piazza dei Signori, a vast and bustling square that hosts a weekly market and is lined with bars and shops. The square is home to several important cultural landmarks including the Loggia del Capitanio. Designed by Palladio, this 16th-century former palace is richly decorated with mythological figures. Opposite, you will find the Torre Bissara, which dates back to the 13th-century and is one of the tallest bell towers in Italy. At the eastern end of the piazza are two Corinthian columns crowned with the statues of the Lion of Saint Mark and Christ the Redeemer. The former dates back to the rule of the Venetian Republic, whilst the latter was added later in the 17th-century as a symbol of Vicenza.

You will also find the Basilica Palladiana in this central square, which was Andrea Palladio’s first commission and is now a national monument. This Renaissance masterpiece is home to the Museo del Gioiello, the only museum in Italy entirely dedicated to jewellery. From Versace to Valentino, fashion lovers will thrive amongst the number of designer pieces on display, as well as those from local artists.

The Teatro Olimpico, situated on the banks of the River Bacchiglione, was Palladio’s final commission and was completed by his successor Vincenzo Scamozzi. Its elliptical design was modelled on ancient Roman amphitheatres and is a masterpiece of perspective and illusion. The oldest surviving Renaissance theatre still stages theatrical and musical productions and is the primary venue for festivals like Vicenza Jazz, which takes place each May.

Cross the Piazza Matteotti and take in the grandiose palladian Palazzo Chiericati, which is now home to Vicenza’s civic art museum. Here you will find many sketches by Palladio, as well as notable artworks by Jacopo Bassano, Tintoretto, Tiepolo and Van Dyck. Fans of Palladian architecture should also pay a visit to the nearby Palazzo Barbaran, which is home to the Palladio Museum.

You’ll have to venture out of the city centre for Vicenza’s crowning glory, the hilltop Villa Capra. More widely known as La Rotonda, it is the most celebrated and imitated of Palladio’s designs. Palladian villas were built with their relationship to the immediate landscape in mind, which is certainly true here. La Rotonda strikes the perfect harmony between its symmetrical design and tranquil natural environment.

Traditional dishes in Vicenza are typical of the culinary diverse Veneto region, which reaches from the Dolomites in the North to the Adriatic Sea in the East. Polenta is a staple food in this part of Italy and is commonly served as a side dish. Owing to the extensive rice-growing areas around Verona and the Po Valley, you can expect to find plenty of risotto dishes on the menu as well. 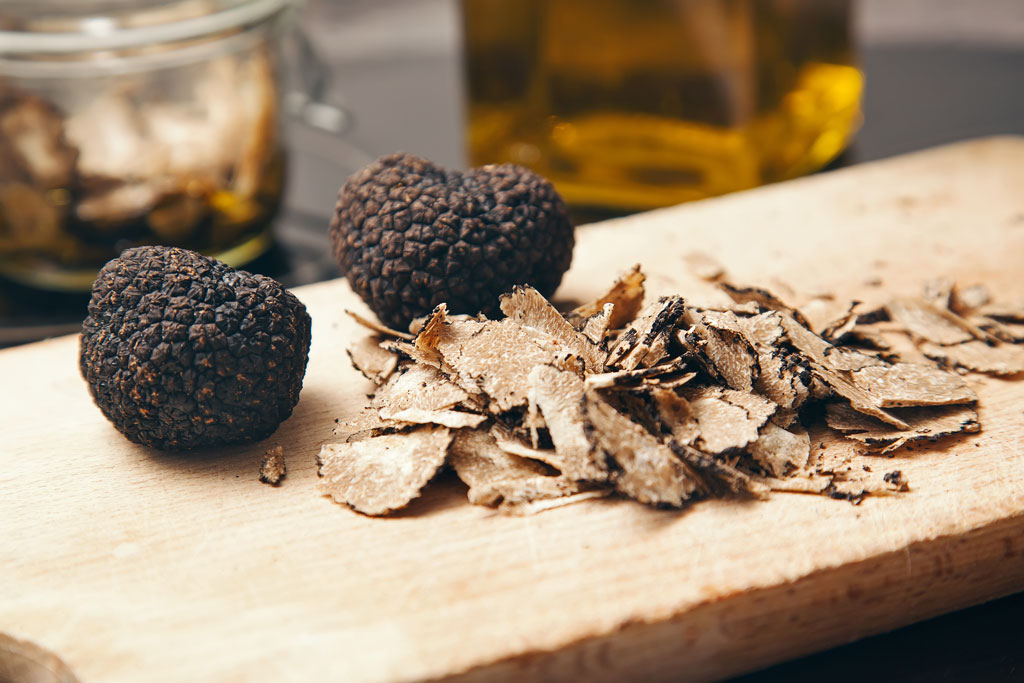 Black truffles grow in abundance in the Colli Berici (“Berici Hills”) South of Vicenza, making black truffle risotto somewhat of a speciality in the city. La Sagra di Lumignano is a festival also held in the Colli Berici each year which celebrates the local seasonal produce, including Lumignano Peas, the shining star of the Venetian dish Risi e Bisi. Translated as “rice and peas”, this springtime soup is traditionally made in celebration of the Feast of San Marco in Venice each April.

Whilst you have likely heard of the Valpolicella, Soave and Prosecco vineyards of Veneto, Vicenza is also a DOC area for a range of red and white wines. The province is situated between the regions of Gambellara, Monti Lessini and the Colli Berici that produce a variety of wines ranging from Merlot and Cabernet Sauvignon to Pinot Grigio.

A short walk from La Rotonda, the Villa Valmarana ai Nani is a neoclassical palace on the outskirts of Vicenza. It sits within a picturesque historical park with fragrant rose and symmetrical Italianate gardens. The villa takes its name from the 17 dwarf sculptures which now stand guard along the garden’s outer walls. Step inside the Palazzina, where the Valmarana family still live, and the Foresteria (“guest house”), for exquisite 18th-century frescoes by Giambattista and Giandomenico Tiepolo. 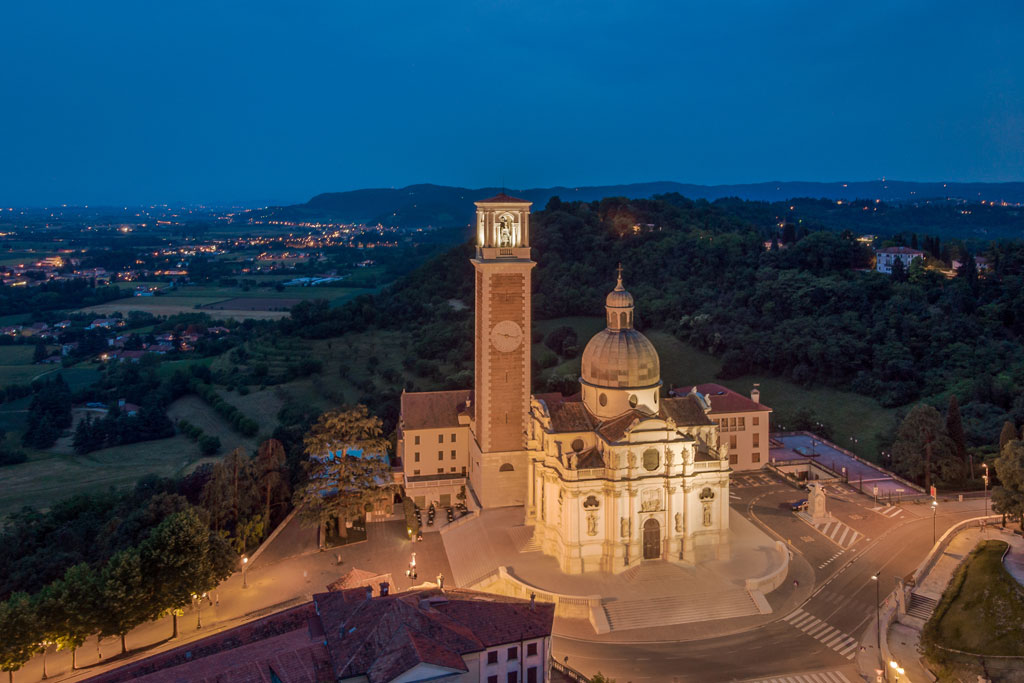 
Climb the Monte Berico for the Santuario della Madonna, a 15th-century minor basilica containing artwork by Paolo Veronese. In front of the church is the Piazzale alla Vittoria, which offers some of the best panoramic views over Vicenza and the Veneto. On a good day, it is possible to see as far as the Dolomites and the Venetian Lagoon.

Montecchio Maggiore is a small town 12km west of Vicenza, which is overlooked by two hilltop medieval castles, Castello della Bellaguardia and Castello della Villa. Here you will find the Fondazione Bisazza, a fascinating place dedicated to contemporary design and photography. The building is adorned with a 24-metre-long frieze featuring an iconic design from the archives of Emilio Pucci. For more of our favourite contemporary art venues in Veneto, read our Guide to Italy for Art Lovers.

There are 24 Palladian villas around Vicenza — read our Guide to the Best Palladian Villas in Veneto for our favourite works by the famous Renaissance architect. Alternatively, why not stay in a Palladian villa of your own and immerse yourself in the opulent history of the region. Villa Zambonina is just one of the breathtaking properties in our portfolio near Venice and Verona, which offers the perfect base for exploring the towns and cities in the area.

There are plenty of parks and gardens to explore in Vicenza. The Parco Querini is a peaceful 19th-century landscaped park, perfect for a leisurely morning stroll. The scenic Colli Berici on Vicenza’s doorstep, and the regional park of Colli Euganei west of Padua, are ideal for hiking and cycling.

From high street fashion to independent jewellery, home and clothing stores, the main shopping street in Vicenza is the Corso Andrea Palladio, which runs parallel to the Piazza dei Signori. In this square alone there are around 10 independent jewellery stores, including Soprana, a family-run watchmaking business that first opened in 1910.

Vicenza is the most important production centre for gold jewellery in Italy. Twice a year, the city hosts Vicenzaoro, which is the largest gold and jewellery trade show in Europe. Whether you are looking for a memorable and unique heirloom or a small gift for someone you love, you’ll find it in Vicenza.

Venice: 50 minutes East of Vicenza by car or train is the iconic floating city. Take the Vaporetto along the Grand Canal, passing brilliant marble palaces and the famous Rialto Bridge before arriving at Piazza San Marco.

Verona: visit the romantic city that inspired Shakespeare for ancient Roman gateways, the Verona Arena and the International Opera Festival. There are countless churches with famous works of art, piazzas, palazzos and museums worth dedicating your time to here.

Padua: this university town has youthful energy, an impressive canal system, and bustling daily markets in front of the Palazzo della Ragione. You’ll find works by Giotto, Donatello and Mantegna here, as well as the Cappella degli Scrovegni painted by Giotto in 1305.