Florence never fails to amaze its visitors. A city full of stories that unfold throughout centuries; every palazzo, piazza and church has a secret to whisper to those that pay attention and listen. The lesser-known curiosities are often those which hold more merriment — take for example street names. Named after historical events, personalities, aristocratic families (that lived and still live there), as well as arts, crafts and professions that were once practiced in the area — history, anecdotes and character lie behind each name.

There is no better way to discover a city if not by foot. On this walking tour of Florence, we suggest an itinerary off the beaten path surrounding the theme of love. Enjoy a romantic day with your dear ones, or simply experience the city through another lense. Our curated Itinerary: Love & Lust, will reveal the romantic, as well as the more mundane and mischievous side of the city.

Walking Tour of Florence: The City of Love & Lust

As Boccaccio depicts in his masterpiece Decameron, love and lust are entwined in Florence’s society. From the Middle Ages up to the 20th century, prostitution was an important part of the Florentine everyday life. Many streets, squares and alleyways reveal this past in their names. Follow our Itinerary: Love & Lost and discover the tender, but also juicy stories of this eternal city.

Start your tour at Mercato di San Lorenzo and head toward Via Faenza. This street was once the hub of many Florentine brothels. Turn left on Via dell’Amorino which, as the translation ‘little love’ suggests, was another popular spot for brothels.


A supposed “love triangle” took place on Via dell’Amorino, inspiring the renowned play The Mandrake by Machiavelli.

Head to Via del Giglio, walk towards Via del Moro until you reach Via delle Belle Donne. The literal translation, “Street of the Beautiful Women”, reveals the pleasure district (or red-light district) that this street once hosted.

The noble Florentine family have been committed to the art of winemaking for over six centuries. Stop by Cantinetta Antinori for lunch or wine tasting, or if you are feeling peckish and in need of a glass of Chianti, head on over to Procacci for their renowned truffle sandwich.

One of Italy’s most famous and luxurious brothels stood on the corner between Piazza degli Antinori and Via de' Giacomini, until 1958. Madame Saffo was so popular among the elite that it became a ‘literary salon’, visited regularly by Italian writers such as Gadda, Bo and recipient of the 1975 Nobel Prize in Literature, Montale.

Head down Via de’ Tornabuoni, turn left on Via degli Strozzi and walk towards Piazza della Repubblica. This famous square was once the centre of the ancient Roman town. During the Middle Ages and Modern Times, the old central market took place here. It doesn’t come as a surprise that with its dark alleyways and hidden corners, this square was a renowned spot for prostitution.

Despite that Piazza della Repubblica was completely renovated at the end of the 19th century, a pompous inscription stands on the imposing arch reading: “L'ANTICO CENTRO DELLA CITTÀ/ DA SECOLARE SQUALLORE / A VITA NUOVA RESTITUITO”

When translated, this inscription reads “The ancient centre of the city / restored from age-old squalor / to new life”. Ironically, in the same square we discover another cultural salon, visited by the same customers of Madame Saffo. Caffe Giubbe Rosse was the meeting place for many Florentine intellectuals.

Head down Via del Proconsolo, onto Via dei Leoni and turn left on Via del Corno. This street sets the scene for the masterpiece of Italian neorealism, Chronicles of Poor Lovers by Pratolini. One of the main characters of this story is a greedy owner of a brothel called “La Signora”. She incarnates brutal power and also reminds the reader that the area behind Palazzo Vecchio was once the main sexual destination for the politicians of the Signoria of Florence.

Cool it down with an ice-cream

Love is all you need...though a scoop of ice-cream never hurts.

Head across the Arno, through the historic Ponte Vecchio, and walk towards Piazza della Passera. Here you will find one of the best gelateria in all of Florence, Gelateria Della Passera — their ice-cream uses only fresh seasonal products, and offers gluten-free and lactose-free options.

Quaint and pretty, this square is far from innocent. The word passera in Italian translates into (children, cover your ears) pussy.  Welcome to Pussy Square. Oh yes — another brothel was located in this very piazza. As a matter of fact, a very good one, considering Cosimo I de’ Medici, the Grand-duke of Tuscany himself was a regular customer!

All you need is a love

We promised love, so let’s move on.

Head on through Via dei Vellutini and walk towards Via Maggio. Keep an eye out for No. 26, a palazzo with a stunning façade. This structure was built by Francesco I de’ Medici, son of Cosimo I, for his lover Bianca Cappello from which this building takes its name. Secret underground tunnels were built — connecting Palazzo Bianca Cappello with Palazzo Pitti, the palace of de’ Medici — so that the lovers could meet in secret! 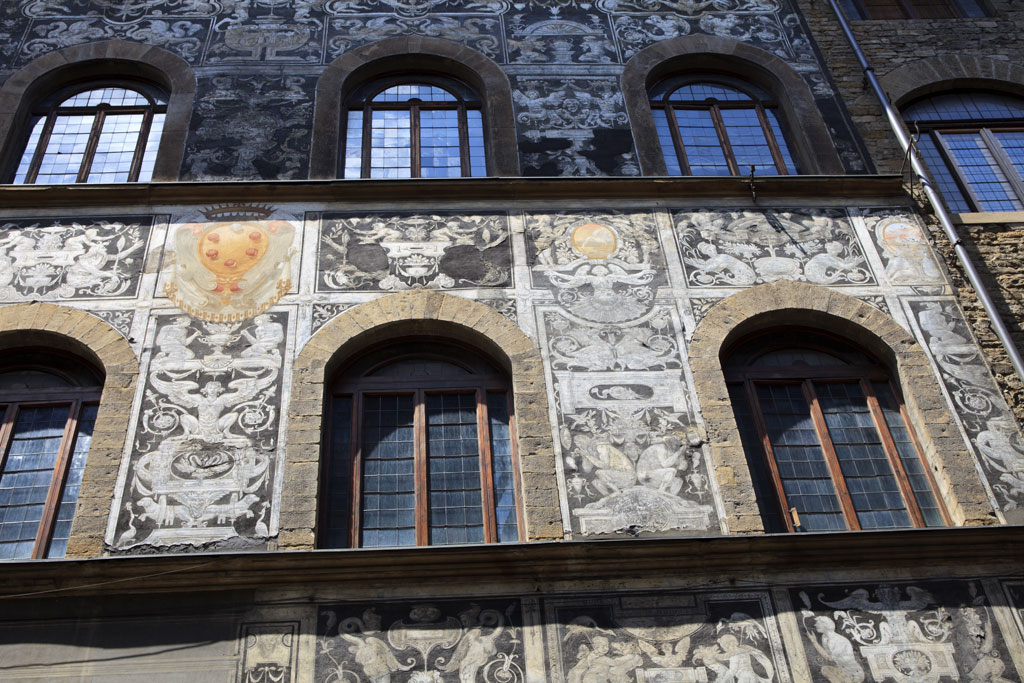 At the end of Via Maggio, in Piazza San Felice, lies another love nest. Casa Guidi was the house where English poets Robert Browning and Elizabeth Browning lived. They escaped Elizabeth’s father to live their romance, and it was here that Elizabeth wrote her collection of poems, Casa Guidi Windows.

Our last stop takes us up Via de’ Guicciardini, onto Via de’ Bardi, where a Florentine version of Romeo and Juliet took place. Ippolito Buondelmonti and Dianora de’ Bardi met and instantly fell in love during the Florentine celebration of San Giovanni. Their two families were enemies, and there was no chance for a legitimate relationship. The two, helped by Ippolito’s mother, planned to get secretly married and escape.

On the night of their escape, Ippolito was caught by the guards on his way to Palazzo de’ Bardi (now known as Palazzo Tempi). Dianora, who had waited impatiently for him, feared he had changed his mind. To save Dianora’s reputation, Ippolito confessed he was there to steal from the enemy family, and was sentenced to death. His last desire was that his death procession could take place on Via de’ Bardi, in the hope of seeing Dianora one last time. When Dianora recognised her love in chains and realised what had happened, she ran towards him in tears, confessing her love in front of everyone. Moved by such noble sentiments, the Florentine Signoria imposed its power on the two families and gave its blessing to the union of the two young lovers.

Keep reading
Insider’s Guide to the Best Panini in Florence and Where to Find Them Restaurant Guide to Florence Classic Tuscan Food: 10 Dishes You Must Eat When in Tuscany One Day in Pisa: An Insider’s Guide Beyond the Leaning Tower 5 Hidden Art Exhibits in Tuscany
Browse all our villas near Florence
Like
Share
Follow
Previous article
Next article