Dario Cecchini is a genius who could only be Italian. In our 30 years of operating as a villa specialist in Tuscany, we’ve met more than a few characters ⁠— but no one embodies the spirit of the region more than our friend Dario.

He may be a Netflix star (a whole episode of Chef’s Table is devoted just to him) but he could just as easily have lived during the Renaissance, for this eighth-generation butcher’s approach to food is as classic as the art that comes from the hills around his native village. 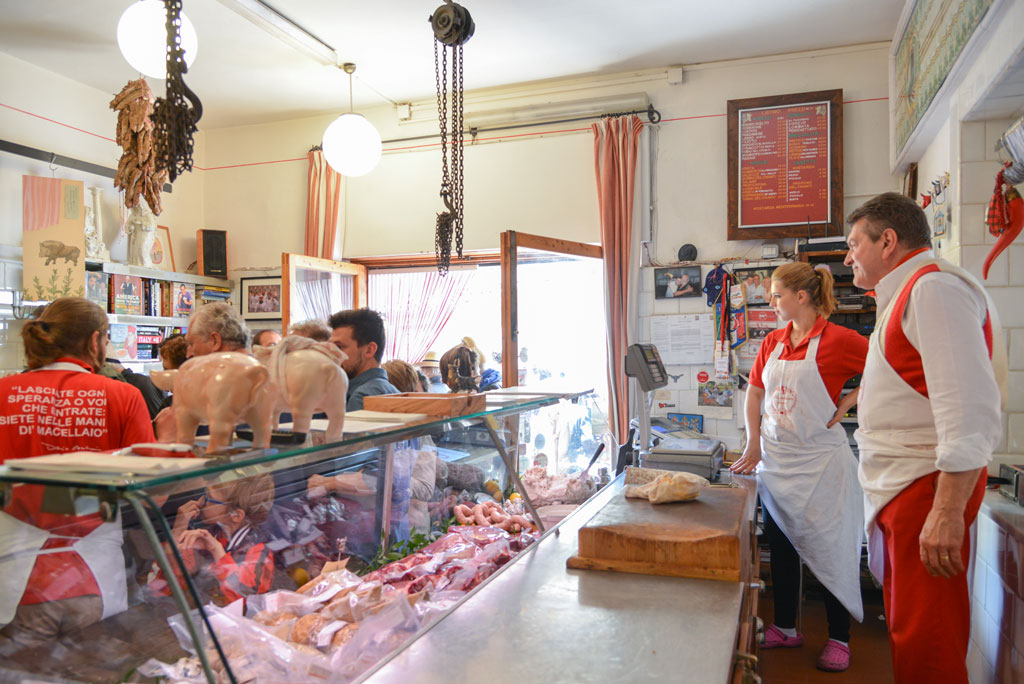 Who is Dario Cecchini?

The 65-year-old maestro works in Panzano in Chianti ⁠— a small hilltop town on the Via Chiantigiana in the heart of the Chianti wine region, halfway between Siena and Florence. That he recites Dante and Shakespeare while operating out of a shop his family has owned for 250 years, gives you a sense of his reverence for history. 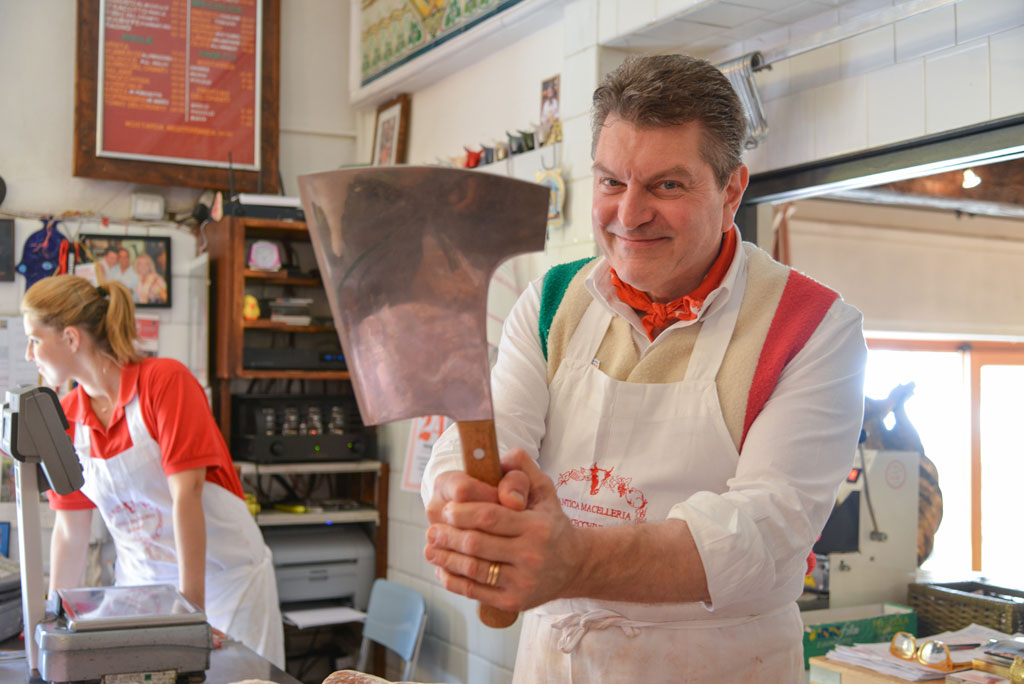 Dario is on a mission to spread his love of meat, but also his deep respect for animals. His world in Panzano in Chianti, is divided into several parts: the butcher shop and three restaurants, whose menus together use every part of the animal. Between Officina della Bistecca, Solociccia and Dario Doc, you can find everything from Musetto al Limone (made from muzzle and trotters), to Tenerumi in Insalata, a warm salad of boiled beef knees, to the famous Bistecca alla Fiorentina.

How did Dario Cecchini rise to fame?

In 2001, during the mad cow scare, Dario became a national celebrity when he held an open casket funeral for the Bistecca Fiorentina. This classic large T-bone steak named for the city of Florence had been banned by the Ministry of Health, which said it could no longer ensure its safety on supermarket shelves. With a great burst of showmanship, Dario drew everyone’s attention to the importance of respecting tradition and the animals we eat. 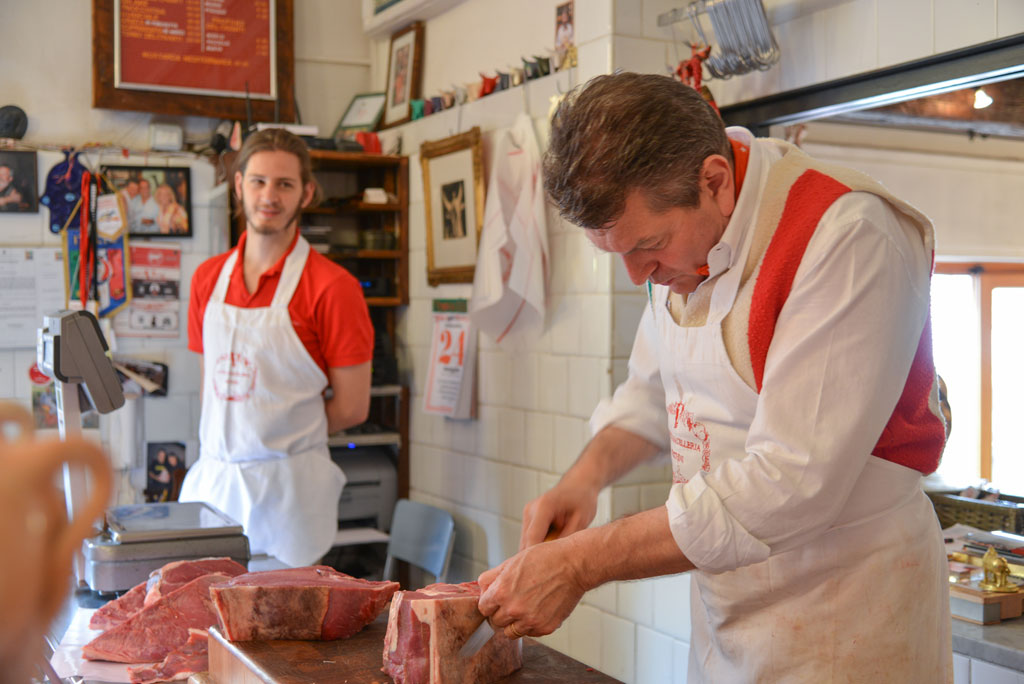 What are Dario Cecchini’s values as a butcher?

Growing up, he explains, “whatever the customer didn't want was what the family ate. My Grandma cooked legs, cooked snouts, and cooked tails. All of the bellies, the blood, guts...it was paradise for gluttons." He describes tasting his first steak, aged 18, as a shock — nice, but nothing compared to the "paradiso" of his Nonna's cooking. He trained at university as a veterinarian before leaving to take over the family shop when his father became ill.

And Dario brings this rich education and his passion — this sense of food as an expression of love — to each of his restaurants. He opened his restaurants, Dario says, to teach people to eat well, and insists on communal tables, to ensure the family atmosphere is enjoyed by all. His recipes come from Tuscan classics; there's no wizardry here, just honest, traditional food. A steak, he decrees, needs only the simplest elements: no salt or oil for cooking — just fire and meat.

But it is his philosophy on life that you will take home with you. To watch him butcher an animal — dressed, typically, in tailored shirts and waistcoats paying homage to the Italian flag — is to observe an act of great respect. Rock music blaring, he stands beaming in front of the crowds that flock to see him. While his assistants circulate with wine and snacks, the star expounds on his theories of ethical butchery, piping up at the end with one of his favourite jokes: “To beef or not to beef!”

But that, of course, is not exactly the question. The real question is: if you choose to eat meat, will you commit to holding it in great reference, as Dario Cecchini does? Why not visit him to find out — our award-winning concierge team can organise a visit to meet the maestro himself from your villa in Chianti.

Keep reading
Renting a Villa in Chianti Classic Tuscan Food: 10 Dishes You Must Eat When in Tuscany Tuscan Cured Meats: What are they and what's the difference? Why is Tuscan wine so special? Best Wineries to Visit in Chianti
Browse all our villas in Chianti
Like
Share
Follow
Previous article
Next article